Vietnam. It's a name you can almost taste. It's a magical word, conjuring up thoughts of street food bursting with pack-a-punch flavours, emerald, karst-punctuated waters and sun-dappled rice terraces. That's why, at Flight Centre, we love it. It's Southeast Asia at its most vibrant and culture-filled, complete with busy streets, ancient temples and smiling locals. It's got adventure and excitement by the bucket-load, but is also home to peaceful beaches - just as beautiful as the ones you'll find in Thailand, but without the crowds. All in all, Vietnam has a holiday recipe that more and more people are getting a hankering for. Want to experience it for yourself? Get inspired with our travel guide and itinerary suggestions below, then give us a call or pop in-store. Our lovely Travel Consultants are mad about Vietnam holidays, and will get to know you, your travel style and budget, so they can tailor-make it easy.

Best of the North (Vietnam)

Northern Vietnam is a heady mixture of thronging cities, fascinating histories and eye-catching landscapes. Its bays are dotted with towering karst islets, its 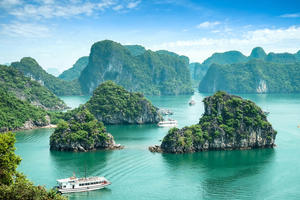 Dynamic yet elegant, the old-school charm of Vietnam will get under your skin. Travelling from Hanoi to Ho Chi Minh City, this classic Vietnam holiday combines these

Choose an Option to Start Tailor-Making Your Vietnam Holiday

Explore ancient ruins in Siem Reap, relax and unwind on the country’s beautiful beaches or indulge your taste buds on a foodie itinerary. Get inspired by our different types of Vietnam holidays below, or chat to one of our lovely Travel Consultants about planning something extra-special:

Off the Beaten Track Holidays

Vietnam
A Foodie’s Guide To Everything Worth Eating In Hoi An, Vietnam
If you’ve ever visited Vietnam, you’ll know it’s home to some of the best food in the world. The infamous Banh Mi, Pho, and rice paper rolls are just the tip of... Read More »
Vietnam
Solo Travel: A Group Adventure in Vietnam and Cambodia
Ali Cairns heads to Southeast Asia for a much-needed break from reality... I have always loved travelling. But since backpacking in my twenties, I’ve been pretty... Read More »
Vietnam
Insider Secrets: Life as a Tour Guide in Vietnam
It’s not every day that you get to attend a Vietnamese cooking class, hitch a ride on a sea plane above Ha Long Bay and take a luxury cruise down the Mekong Delta.... Read More »

Things to Do in Vietnam

Long and thin, Vietnam borders China and Laos to the north and Cambodia towards the south. These differing sides of the country offer a unique experience that you won’t want to miss. North Vietnam is where you’ll find the charming streets of Hanoi and its legendary coastal neighbour: Halong Bay – home to glittering waters and technicolour junks. Venture south, and Vietnam offers ancient photo opportunities in Hoi An, followed by a huge dose of history in Ho Chi Minh City.

Nestled against the Northern Vietnamese coast, a jaunt away from Hanoi, Ha Long bay is a mesmerising collection of limestone karsts bursting out of the Gulf of Tonkin. Vietnamese folk tales advocate that the islands were created when gods sent a family of dragons as protectors from invaders, these dragons spat out jade jewels which transformed into the structures there today. The UNESCO world heritage site is famous for it’s beauty and being a haven for sailing and adventure enthusiasts alike as there are myriad ways to sail, hike, climb, kayak, scuba dive and more in this natural wonder.

Known as the ‘bread basket’ of Vietnam the Mekong delta is a biological treasure trove made up of many different distributaries of the mighty Mekong River. The Mekong delta is the point at which the mighty river, which defines so much of the geography of South East Asia, meets the sea. Visit the diverse range of waterways here, from peaceful rice paddies and flooded mangrove forest to bustling fish markets.

Following on from the Mekong River Delta it’s worth mentioning one of South-East Asia’s best kept secrets – the region of Phu Quoc. The district is made up of 28 islands and is named after the largest of the islands – Phu Quoc. Here on the islands, many of which are uninhabited, you can find your own slice of untouched, white sand paradise. Furthermore, you can explore the waters surrounding these islands which are home to tropical fish, dugong and turtles.

The Cu Chi tunnels are just one of the many fascinating remnants of the Vietnamese War. The network of interconnecting tunnels were the epicentre of the Vietcong’s operations for the Tet offensive. They are now an enthralling museum to the conflict and offer an insight to the horrors faced by both sides during the War.

Mountains and Rice Paddies of the North

The Bucolic area surrounding Sapa in Northern Vietnam is postcard perfect. The steep foothills surrounding Mount Fransipan (Vietnam’s highest peak) are awash with perfectly maintained paddies, the majority of which are still tended by ethnic minorities and traditional hill tribes. The vistas and the unique peoples of the region make it a must visit for outdoors enthusiasts, culture vultures and anyone with a camera.

Vietnam’s cities are diverse and intoxicating. The bustling streets are invariably filled with sumptuous street eats and trendy cafes and bars.

Located in the South of Vietnam, Ho Chi Minh City – otherwise known as Saigon – is a modern Asian metropolis consisting of 12 million people. Check out one of the multitude of rooftop bars, visit the War Remnants museum to brush up on Vietnams turbulent past or dine with the locals.

Waltz through the bustling streets of Hanoi and enjoy the multitude of bric-a-brac shops. Make sure that you take the time to discover delightful Vietnamese style coffee in one of Hanoi’s trendy cafes.

Another of Vietnam’s UNESCO World Heritage sites, the old town of Hoi An was a trading port during French colonial rule and the architecture of the town has a mix of Western and Asian influences. Stroll over the Japanese Bridge at dusk and see the twinkling lanterns floating peacefully down the river.

Popular with local and international tourists the seaside resort of Nha Trang is awash with resorts and spa’s which compliment the wide sweeping beach to make the perfect place to get some rest and relaxation.

When to Go to Vietnam

With a tropical monsoon climate, knowing when to go to Vietnam can be tricky, especially if you’re planning to explore the entire length of this narrow 600-mile-long country as the climate in the North, Centre and South vary largely based on the time of year. But don’t be put off; despite its unpredictability, Vietnam still has some incredible experiences to offer year-round. If you are planning to cover the whole of Vietnam, consider visiting in September to December or March and April.

Dry season in Southern Vietnam is from December to May, then the rainy season arrives in May and lasts through to September. Don't be put off by the rainy season though as rains will occur in the form of very brief afternoon downpours.

Wet season here is from November and lasts until the end of December, although rains start sooner and last longer slightly further North in Da Nang and Hue.

Generally, the weather is pleasant (sunny and dry) from October to December with the wetter weather accompanying the intense hear from May to August. In contrast to the South the North has colder winter months from January to March.

Vaccinations: Extra vaccinations are not required if you’re planning a short stay in Vietnam. If you are planning a long stay or looking to trek in the countryside, you may want to discuss extra coverage against Hepatitis B and Rabies with your doctor.

Flight time: London to Hanoi flights take over 11 hours and usually include a stopover.

Visas: British Citizens do not require a visa for stays of up to 15 days. For visits of up to 30 days you can apply for an e-visa before you travel online.

Why Book Your Vietnam Holiday with Flight Centre

We know Vietnam: Many of our Travel Experts have visited Vietnam, and can easily craft a tailor-made trip to suit your needs and budget.

Local knowledge: As a global travel brand with shops all around the world, Flight Centre also has a local team in Vietnam dedicated to ensuring your holiday runs smoothly. When you book your Vietnam holiday with Flight Centre, our local team will be on hand to welcome you at the airport, transfer you to your hotel and operate your day tours and experiences.

Flexibility: We offer flexible deposits, the opportunity to pay the balance of your holiday just 10 weeks before departure and fixed change and cancellation fees.