Situated just north of the Mexican border on the coast of the vast Pacific, San Diego is well known for its laid-back lifestyle - the perfect fit for any Californian holiday itinerary. Explore the beaches, parks and rugged coastline or meet some locals in the trendy Gaslamp quarter. 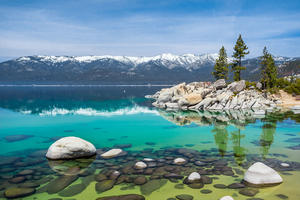 Perfect for lovers of scenery and the great outdoors, this Journey takes you from the bright lights of San Francisco to the waterfalls, lakes and rivers of Yosemite

The bohemian neighbourhood of Ocean Beach demonstrates so much of that Southern California (SoCal) living we all hear about. If you're a sunseeker head to the beach itself. Here you'll find surfers and fellow sunbathers aplenty; there a few better places to chill out SoCal style. If you prefer to stay dry, head for Newport Avenue and browse the Taquerias and boutique shops, or check out the farmers' market too, open Wednesdays 4-8pm all year-round.

To the north of San Diego, in the waterfront suburb of La Jolla, is La Jolla Cove. This coastal area boasts a picturesque beach, surrounded by dramatic cliffs, rugged rocks and a mix of turquoise and navy waters. And it's not just a pretty face. La Jolla Cove is also part of a protected marine reserve and is a magnet for sea life, including sea lions and seals. Admire them from afar or head out with your snorkel gear.

Right at the base of California, near the Mexico border, San Diego is a great start or end point for your Californian road trip. It's also an excellent contrast to the freneticism of Los Angeles and San Francisco. Laze along the beaches and parks after a long drive, or toast to your upcoming adventure at one of the many trendy cocktail bars in the Gaslamp Quarter.

Due to its geographical location San Diego is blessed with a plethora of fabulous wildlife-spotting opportunities. Along with the chance for visitors to see the aforementioned seals and sea lions, it's also possible to spot gigantic pods of dolphins and whales. Every year more than 20,000 gray whales journey from Alaska to Baja California in Mexico, consistently migrating through the waters of San Diego. Visit from Mid-December to April for your best chance to spot these magnificent beasts. San Diego is also blessed with visitation from the world’s largest mammal – the Blue Whale – from the months of June to September.

Attracting surfers and sunbathers alike, Mission Beach is a popular spot in San Diego, especially water sports lovers. Visitors are seduced by the pristine sands along the two-mile long boardwalk, not to mention an array of activities and a thriving nightlife. If you enjoy fishing, there are some great places to cast-off near South Mission Beach Park.

At the literal and figurative heart of San Diego is Balboa Park – home to 16 museums, performing arts venues, gardens and trails and, of course, the world-renowned San Diego Zoo. The park represents the coming together of culture and nature, which is one of the key that makes San Diego such a brilliant place to visit.

Famous for its nightlife, this historic quarter of San Diego is populated with clubs, bars and cocktail lounges, not to mention restaurants and trendy ice-cream and coffee shops. Easily explored on foot, the Gaslamp Quarter is mainly comprised of Victorian buildings which house lively entertainment, including excellent music and dance clubs.

Take a break from the beach and enjoy some of the excellent water parks that are on offer in the San Diego area. Whether you want to wear out the children or act like a big kid yourself, the water parks are a great way to enjoy aquatic activities year-round. The pick of the parks are: Mission Bay Park, Aquatica, Legoland Water Park and The Wave.