If Mexico were a game, it would be choc-full of killer combos. After all, there aren’t many destinations where you can fuse together relaxation, culture, history, adventure and, quite frankly, the best cuisine going. Gorge on tacos, swim amongst turtles and whale sharks, dive into cenotes, be dwarfed by ancient pyramids and get immersed in some of the world’s most fascinating festivals – Mexico has it all. And, with a little help from our planning guide below, you can start thinking of what you’d like to see and do here. Or why not pop in-store and chat to our friendly Travel Consultants? They’re bursting with Mexico know-how, and will get to know you, your travel style and your budget to build the perfect itinerary. Simply put, we’ll tailor-make it easy. 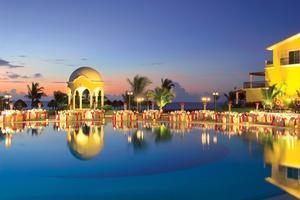 Each one of this exclusive resort’s residences boast private balconies and marble bathrooms with whirlpool bathtubs – and with a round-the-clock concierge,

Just minutes from the fascinating Mayan ruins of Tulum, Dreams Resort & Spa is an idyllic family-friendly escape. Its all-inclusive experience grants you gourmet

Secrets Maroma Beach is all about the finer things in life. With gourmet restaurants, a fabulous spa, and numerous swimming pools at your fingertips, this adults-only 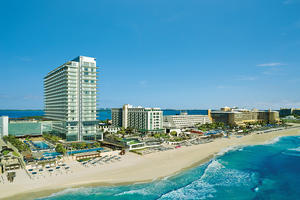 Peaceful, stylish and secluded, Secrets the Vine Cancun is the kind of adults-only retreat that dreams are made of. From the lavish restaurants to the powder-white Every suite in the resort has a terrace or balcony: the ‘swim-out’ suites feature ocean views, while the junior suites provide plenty of space for all the family. 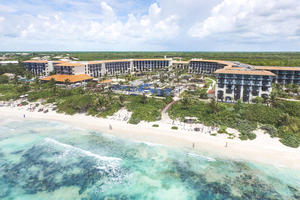 Relax in pure opulence at this all-inclusive haven, where you won’t have to lift a finger. Opt for an Alcoba Ocean View Suite and wake to the sounds of the ocean

Choose an Option to Start Tailor-Making Your Mexico Holiday

Where to Go in Mexico

Flight Centre’s beach holidays take you to the best of Mexico – from the kid-friendly Riviera Maya to Puerto Vallarta’s Pacific Coast, the whale-rich Baja Peninsula, or the crushed-coral beaches of Isla Mujeres. Chat to your friendly Travel Consultant about customising your itinerary.

When you book from Flight Centre’s Escapes range you can choose between luxury, all-inclusive, honeymoon or family-friendly – to name a few. For more ideas, browse our Mexico holiday types below:

Mexico
A Guide to Mexico's Best Beaches
Stretching 80 miles from Cancún to Tulum on the Yucatán Peninsula, Mexico’s Riviera Maya coastline features some of the best beaches on the globe, the world’s... Read More »
Mexico
The Best Places in Mexico to Celebrate The Day of the Dead
The Day of the Dead is a time when Mexicans gather to remember loved ones who passed away, in a celebration of life and death that lasts from October 31st to November... Read More »
Mexico
7 Reasons to Visit Merida
While Cancun might have the beaches and the resorts, it’s in the nearby city of Merida that you can find the best of southern Mexico’s cuisine, culture and... Read More »

Top Things to Do

Top Things to Do in Mexico

Day of the Dead

Originating in Aztec, Toltec and Nahua cultures, the day of the dead, or dia de Muertos, is celebrated throughout Mexico and Central and South America on the 2nd November. Across Mexico there is an eruption of colourful outfits, flowers and festivity, rather than the commiseration of the dead their lives are celebrated. Mexicans will dress up in bold colours and gather for parties with singing and dancing. Some of the best spots to spend the day of the dead on your holiday to Mexico are the island of Janitizo in the lake of Patzcuaro, the historic centre of Oaxaca, San Miguel de Allende and, of course the capital Mexico City.

Found on the Yucatan peninsula, Chichen Itza, is one of the most visited archaeological sites in the world and for good reason – the site is one of the seven new wonders of the world and a UNESCO world heritage site. The site is a beautifully well preserved example of Mayan architecture, the zenith of which is El Castillo. However, the site is so much more than a pyramid, as the site contains many buildings and stone carvings. Chichen Itza is a must see on your Mexican holiday.

Get up close and personal with the wildlife

With such a variety of terrains and ecosystems it’s unsurprising that one of the best things to do in Mexico is to see some of the spectacular local wildlife. If you are lucky you can spot Ocelot (a similar-looking smaller version of a leopard) or the Mexican wolf. Don’t restrict yourself to land animals though, the seas are abundant with fascinating wildlife from turtles to whale sharks and dolphins. Perhaps the highlight of Mexico’s year in wildlife is the Monarch butterfly migration during which hundreds of millions of Monarch butterflies congregate in the Oyamel fir trees of Michoacan – visit the Monarch butterfly biosphere reserve for the best opportunities to see this phenomenon.

Sample some of the local cuisine

Mexican food is world famous, something which is desperately unsurprising given its quality. To miss out on tasting it on your Mexican holiday is close to criminal. Dine in various restaurants or, even better, explore street stalls serving up tacos, burritos, quesadillas, tamales, asado and a wealth of other delicious cuisine.

Laze around on the beaches of Cancun

An infamous resort on the Yucatan peninsula, Cancun is famous for lively nightlife, shopping, dining and, of course beautiful sweeping beaches bordering the Caribbean sea. You would be remiss not to take the opportunity to unwind on one of these slices of paradise. Some of the best beach locations include: Playa Delfines – known as Dolphin Beach and consisting of 14 miles of unspoilt beach, Tulum beach – this lazy, bohemian beach is set apart from some of the more popular beaches in the region and Playa Norte on Isla Mujeres – a beach located on a stunning isle just off the coast that is well worth the boat ride.

Jump into the cenotes

A centor is a natural pit or sinkhole which can be found in limestone areas. Although a sinkhole doesn’t sound terribly exciting they are some of the most spectacular structures on earth. The void left by the sinking rock is usually filled with crystal clear waters which are illuminated by heavenly shafts of light emanating from access holes. Add to this the dramatic limestone cave structures and you create a real feast for the eyes. Swim, snorkel and even dive in these glorious natural formations – some of the best Cenotes to visit on your holiday to Mexico are Ik kil, Zaci, Suytun and Dos Ojos.

Top Places to See in Mexico

Mexico is dotted with vibrant colonial cities characterised by winding streets and bright housing and churches that would be highlights of any European nation. Luckily for your Mexican holiday these cities go ‘one further’ than European destinations with a unique local twist such as the pink hued church of San Miguel de Allende or the yellow and red façade of San Cristobal de las Casas.

Situated on the Caribbean coastline of the Yucatan Peninsula is Tulum. This old Mayan port is terrifically well preserved, twin this with its beautiful coastline and dreamy blue waters and you have a stunning destination for travellers. Make sure you don’t miss El Castillo, jutting out on a craggy outcrop into the Caribbean Sea.

When to Go to Mexico

Unlike the UK, Mexico has just two seasons: wet and dry. Although the names are pretty self-explanatory, the weather varies considerably, so whichever time you choose to visit, you’ll be sure to find some sunshine somewhere. And then there are Mexico’s legendary festivals and fiestas to consider too. To help you decide when to travel, we’ve broken the year into the seasons below.

The dry season is generally the best time to visit Mexico, but don’t be fooled – temperatures between December and February can fall below freezing and snow is not unheard of, especially in the higher elevations. The warm, dry weather makes this a great time to hit the beach or go hiking in the rugged interior and from December to March, look out for blue and grey whales which come here from Alaska to breed.

Best places to visit in the dry season

Day of the Dead: on 31st October, head for Oaxaca for three days of processions, dancing and music to honour the spirits of the dead, who return to their families for just one night of the year.

Wet Season: May to September

As temperatures hot up, you’ll find the cool breezes along the Mayan Riviera and around Mexico City most welcome. Even during the rainy season, showers only last for an hour or two before clearing up, so it’s still a good time to visit, and there are fewer people about. Do bear in mind however that hurricane season runs from June to November, which generally affects the Caribbean coast.

Best places to visit in the wet season

Whale sharks: in July and August the mighty whale sharks arrive off the coast of Cancun for feeding and mating; watch or swim with them on a boat trip.

Visas: British Citizens do not require a visa to visit Mexico, but will need to complete an immigration form upon arrival and supply the same form when exiting the country.