There are three waterfalls (Horseshoe Falls, American Falls and Bridal Veil Falls) that straddle the border between New York state, USA, and Ontario, Canada. Collectively, they are known as the legendary Niagara Falls, renowned for being one of the most spectacular natural spectacles in North America. More than two and a half a million litres of Niagara River water cascades off these falls each second, the effect of which is a remarkable demonstration of the power of nature. The sound and sight of this volume of water thundering onto the river below, creating a billowing cloud of mist, is something that will leave you awe-inspired and scrambling to take photographs. 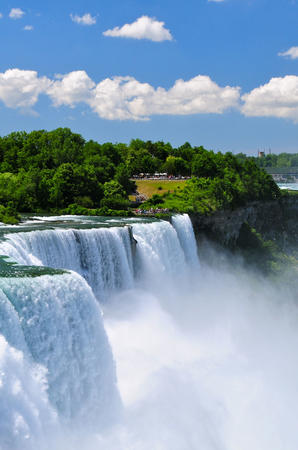 Take in the three top sights on Ontario on this short and sweet Journey, covering the lively city of Toronto, the raging torrent of Niagara Falls and the cosy lakeside vineyards of Niagara-on-the-Lake. There’s plenty to see and do: you’ll soak up the sights of Toronto,...

Sometimes referred to as Canadian Falls, Horseshoe Falls is the largest and most famous of the three falls and, most likely, will be the falls that you will have seen in brochures and online. The falls drop over 50 metres along a rim that is almost 800 metres wide in a shape that, predictably, resembles a horseshoe. Around 90% of the water in the Niagara River will pour over Horseshoe Falls.

Named due to the fact these falls are entirely within the American border, the American Falls are separated from Horseshoe Falls by Goat Island and are equally as striking. The rim of the falls is more straight and, from the American side, offers an excellent ‘side profile’ where you can get up close to the torrent of water cascading down onto the large talus boulders scattered below.

The smallest of the three falls, separated from American Falls by Luna island, is the most ‘traditional’ looking waterfall – although still magnificent in its own right. Visitors can reach Luna island via a pedestrian bridge from Goat island. The Cave of the Winds attraction (American side) allows visitors to get up close to the base of the waterfall and experience the ‘tropical-storm’ like conditions which exist at the base of Bridal Veil Falls.

The Maid of the Mist & Hornblower

A must-do whilst visiting the American side of Niagara Falls, the Maid of the Mist is the highlight of many people’s visits. The double decker ‘Maid of the Mist’ boats take visitors from the Observation Tower, past American Falls and into the basin of Horseshoe Falls. It is one of the very best ways to view the magnificence of the falls. Similarly, on the Canadian side of the falls, visitors can take the Hornblower cruise into the basin of Horseshoe Falls and really feel the spray up close.

The flow of the waterfall is at its peak during the months of June, July and August. As such, this is also the most popular time to visit.