Sacred to the Indigenous people of the region, the area is listed as a UNESCO world heritage site and is within the Uluru-Kata Tjuta National Park, Northern Territory - a protected area 1,2017 miles South of Darwin and 270 miles South-West of Alice Springs. The park also contains the remarkable Kata Tjuta – also known as the Olgas – which are 36 domes of rock that erupt out of the desert landscape.

As a relatively remote landmark we advise that you take a couple of nights to really get under the skin of this iconic landmark. Walk around the base with an indigenous guide and learn more about the heritage of the area, take a camel ride around the monolith and make sure you don’t miss the sunset. As the day comes to an end the landmark is lit up by the setting sun with fiery reds and soothing maroons.

To visit Uluru on your holiday to Australia, see our example itineraries below or get in touch with one of our friendly and knowledgeable consultants to tailor-make your trip. 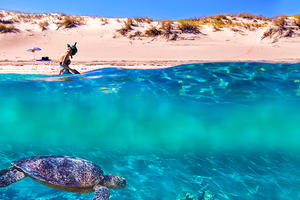 Watch nature take on a new dimension in Western Australia. Where else could you enjoy a holiday that combines sweeping sandy coastlines with dramatic desert 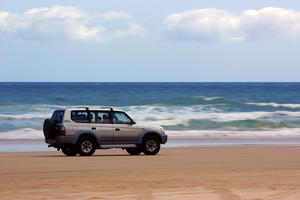 Things to do in Uluru

You would, perhaps, assume that after the sun sets at Uluru, its allure dwindles, but that’s not the case. After dark, the mesmerising Field of Light art installation comes alive with a display that the Daily Telegraph has called “completely beguiling”. Spanning the size of seven football fields the desert is illuminated by a rainbow of colour, emanating from 50,000 flower-like lightbulbs. The installation is in place until 31st December 2020 so be sure to include this in your Australian holiday.

Field of light at night

Path into the field of light

Dine under the desert stars

Want a romantic setting to experience the best of Uluru? Want to sip sparkling wine as the stars simultaneously rise above you? Want to enjoy the lilt of the didgeridoo at dinner? Want to tuck into a three-course meal that incorporates native bush tucker into delectable dishes? Want to have a local guide talk you through the signs of the Southern Hemisphere night sky? Ok, we’ll stop with all the questions as it’s clearly safe to assume that the answer is a resounding ‘YES’. Experience it all (with return transfers from your hotel of course) at the Sounds of Silence dinner; a travel experience which was recently entered into the Australian Tourism Hall of Fame.

Camel ride around the rock

What better way to really get into the desert than upon a creature often referred to as ’the ship of the desert’?  Rock gently side to side (as you look upon the rock) on these surprisingly silent creatures as they carve a path through the deep red sand and give you a marvellous perspective on this famous landmark.

An awe-inspiring must-do is watching the sunset at Uluru. The daily spectacle can be viewed on a sunset tour or from one of the designated viewing areas. To beat the crowds head to Talinguru Nyakunytjaku for a 360-degree view of the landscape. Be sure to hang about after the sun goes down too, as the vivid colour show cast on Uluru is anything but short-lived.

Learn about the local culture from Maruku artists

Ok, so technically this isn’t Uluru. But we still highly recommend Kings Canyon. Situated three and a half hours east of Uluru, the soaring sandstone walls are well worth a visit on your visit to the Red Centre. The Kings Canyon Rim Walk is a superb hike, boasting stunning views of the surrounding landscape. For a real treat get to the canyon for sunrise and watch this dramatic landscape come to life. Chat to one of our friendly Travel Experts to include Kings Canyon in your Australia holiday itinerary.

When to go to Uluru

The best time to visit Uluru, and most of the red centre, is between May and September. During this time the weather will be favourable – ranging from around 20 degrees centigrade to 30 degrees centigrade with minimal rain. Although, overnight temperatures can be very cold, so make sure you pack enough clothes! Between August and September are great months to see wildflowers.

How to get to Uluru

The easiest way to get to Uluru is to fly to the nearby airport of Ayers Rock/Connellan which is served by most of the major airports. Alternatively you could take a road trip to the destination through the outback.  If you are feeling luxurious why not take The Ghan – which runs from Darwin to Adelaide.