Forget browsing online for your Philippines flights! Free up your time and chat to our friendly Travel Consultants in-store, via Live Chat or over the phone – they’ll do all the legwork for you.

First
Call us on 0800 082 1174
Multi-stopover
Want a trip that includes multi-stop flights?Get in touch with an expert Consultant today!
Read more
Choose a Method of Contact

More Information about the Philippines

How long is the flight to the Philippines?

Flights from the UK to the Philippines generally disembark in Manila, Clark or Cebu, where the country’s main international airports are based.

The long-haul flight to the Philippines takes over 13 hours non-stop.

The total flight duration from London to Manila is 13 hours and 5 minutes.

What airlines fly to the Philippines?

The main airlines that fly to the Philippines are...

What are the main airports in the Philippines?

What are the main things to do and see in the Philippines?

In 1521, explorer Ferdinand Magellan went ashore on an island that was later to become part of the Philippines - a move that lead to the Spanish colonisation of the region, which forever changed the history of the country. The Spanish dominated the Philippines until 1899 when the United States began their period of influence in the country's affairs. Today the culture of the country is a fascinating blend of Spanish European, American and Asian.

The principle entry point into the country is the capital Manila. Once you've arrived in the city, be sure to appreciate the original Spanish part of the city by exploring Intramuros. Here there are well-preserved medieval ruins, the Cathedral and terrific museums. While you're in Manila, check out the Bonifacio Shine, the Coconut Palace and the Malacañan Palace. Being a largely Catholic country, there are many churches that are worthy of investigation.

After you're satisfied with your Manila exploration, it would be criminal not to appreciate the waterways of the archipelago. The beaches of Boracay are particularly beautiful - especially White Beach and Puka Beach. The island is also a popular dive destination and you'll find plenty of outlets happy to provide advice and hire you the appropriate gear.

Destinations in the Philippines

Need More Than Flights? Let Us Tailor-Make Your Philippines Holiday... 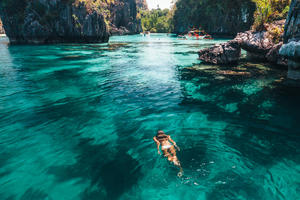