Flights to South America
Our friendly Travel Consultants know their stuff when it comes to South America flights, and will take all the hassle out of your travel plans! Visit us in-store or give us a call and we’ll tailor-make it easy.

Sometimes it's easier to talk! Call us on 0800 587 0058 to chat instantly - It's the quickest way to get your quote! Our travel consultants are waiting to speak to you.

Our friendly Travel Consultants know their stuff when it comes to South America flights, and will take all the hassle out of your travel plans! Visit us in-store or give us a call and we’ll tailor-make it easy.

What Our Customers Say about Us

Stretching from the idyllic Caribbean Sea in the north to the spectacular beauty of the snow-capped peaks of Patagonia in the south and surrounded by the Pacific Ocean to the west and the Atlantic Ocean to the east, South America's breadth is awe-inspiring. It is on this continent that you're able to explore the remains of ancient civilisations, laze around on picturesque beaches and dance all night in mega-clubs. On top of this is the Amazon Jungle, the ski resorts and the continent's obsession with football.

The big ticket attractions in South America include following in the footsteps of the Incas to Machu Picchu in Peru, cruising the Galapagos Islands off the Ecuadorian coast, appreciating the Uyuni Salt Flats in Bolivia and getting saturated under the Iguazu Falls that border Argentina and Brazil. Also to add to the list is the impressive colonial town of Carthenga in Colombia, tango the night away in Buenos Aires and investigate the Cathedral in Santiago de Chile.

On the other hand, you may wish to avoid the standard traveller route and head for French Guiana, Suriname and Guyana – equally fascinating countries that are largely untouched by tourism.

Are you ready to explore South America? Check out our flights to South America or contact Flight Centre for great tips on things to do and see on your latin holiday. 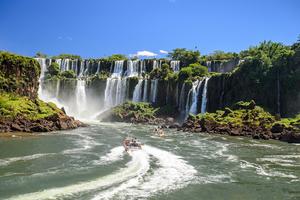 For the nature lover who also wants to explore the nightlife of the urban jungle and have plenty of time on the beach, this nine-day adventure offers the perfect Peru is an adventurer’s paradise. Immerse yourself in the rich history, abundant wildlife and fascinating culture on this small group Journey. You’ll take in all 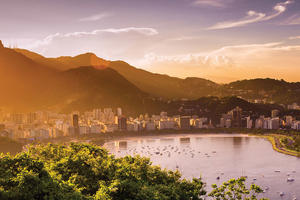 Bring your dancing shoes and immerse yourself in the lively rhythms of Argentina and Brazil on this colourful small-group Journey. Starting in Buenos Aires, you’ll

South America
Discovering Brazil's National Parks
Quartz trails and waterfalls, caves and topaz-hued swimming holes, sand dunes and oasis-like lagoons. Four of Brazil’s National Parks: Chapada Dos Veadeiros, Chapada... Read More »
South America
Vamos a los vineyards! A guide to Cafayate, Argentina’s Second Wine Region
It’s no secret that Argentina is a major player in the world of wine production. Its most famous wine-growing region, Mendoza, is said to produce a whopping 60% of the... Read More »
South America
6 of the Best Foodie Hotspots in Rio
Famous for Carnival, caipirinhas and of course, the Copacabana, Rio is a dynamic, diverse city where tourists and locals mingle against a backdrop of beautiful beaches,... Read More »