Why I Love Travelling Business Class with Etihad

Flying long-haul can be a tough old slog at times – unless you’re flying Business Class with Etihad Airways that is. I was lucky enough to do just that on my recent holiday to Australia. I experienced both the incredible Airbus A380 (London to Abu Dhabi) and the Dreamliner Boeing 787 (Abu Dhabi to Brisbane) on my trip to Queensland, and it very quickly became clear that, when it comes to luxury travel in the sky, this airline is leading the pack. Here’s a bit about my first-hand experience and why I now love to travel Business Class with Etihad: 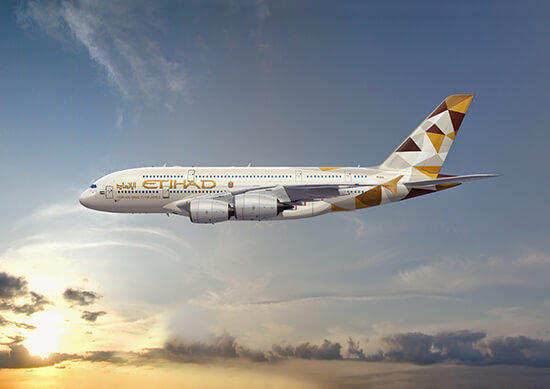 Departing from the comparatively quiet Terminal 4 at Heathrow meant we were sat in the spacious, bright and airy Etihad lounge just minutes after checking in: think buffet breakfasts and a la carte dining, with views over the airport. As it was early, I opted for eggs, bacon, grilled tomatoes and hash brown, as well as some muesli from the buffet. And of course some Champagne. When in Rome.

Then it was time for a quick 15-minute complimentary facial (I could have also had a massage) – perfect for kick-starting that holiday feeling. Etihad has a long-standing partnership with Six Senses, the ultra-luxury hotel group, and most of their lounges offer this incredible service. Business Class passengers pay a nominal fee (£15 for a 15-minute treatment), while First Class guests, Platinum cardholders and Etihad Airways Partner-equivalent guests will receive one free 15-minute treatment at Abu Dhabi or London Heathrow. 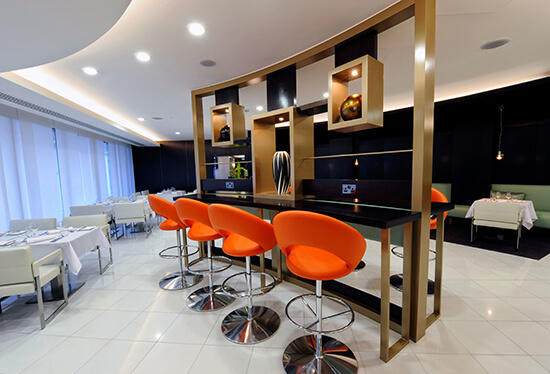 Then it was time. We boarded the upper deck of the A380, and the first thing that struck me was the style and ambiance of the whole plane; it felt like you were walking into a contemporary Arabic boutique hotel or a trendy Mayfair lounge bar. It was the epitome of elegance and sophistication – like nothing I’d seen on a plane before. The lighting was sublime with very mellow brown and yellow hues, without a stark florescent light in sight.

The galleys are almost hidden away with no sign of any trolley throughout the entirety of the flight. In fact, the galleys are more akin to a small restaurant kitchen. Subtle light displays with Arabic patterns were projected on both the floors in the central galley areas and throughout the cabin, adding to the soothing, luxury feel. 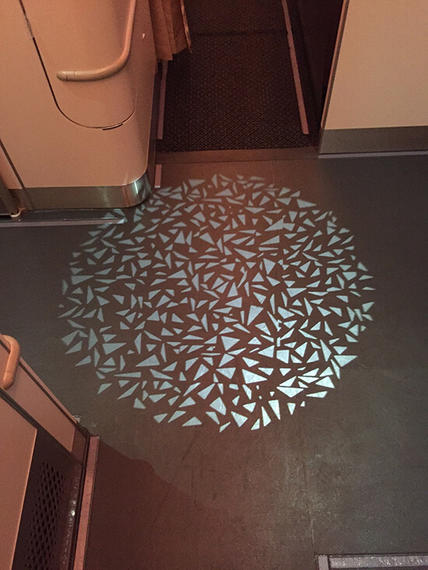 Then there’s the seat, or as Etihad calls it, ‘the Studio’. The moniker captures the feel perfectly. The seat had as much room as most airlines’ First Class offering. It is upholstered by Poltrona Frau, is 22 inches wide and converts into a fully-flat bed of up to 6ft 8in – one of the biggest in the sky. Every passenger has direct aisle access too, with the layout in a 1-2-1 configuration across the cabin, and the aisle side also features a sliding privacy screen. 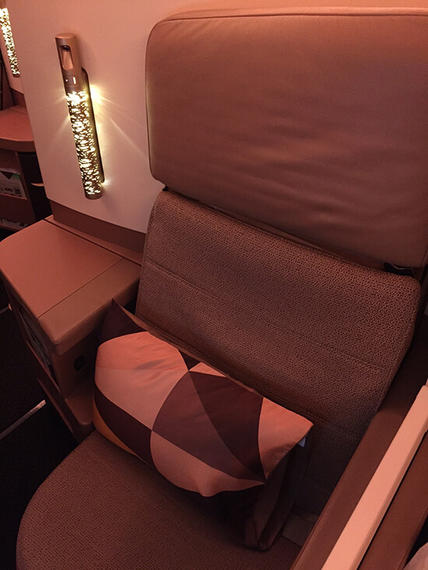 The TV screen was 18.5-inches wide and the remote control also had a separate small screen, similar to a handheld gaming device. This was a particularly great feature, as it meant I could actually watch two programmes at once, choosing from over 1,000 films and TV shows, as well as live TV.

A separate control for an unending choice of seat positions – as well as some pre-set options with various lumbar support options and an in-seat massage function – meant it was easy to get comfy. And with at least three separate storage spaces, I didn’t have to sacrifice any legroom for my hand luggage.

Am I really on a plane?

The bathrooms simply have to be seen to be seen to be believed. They boast a mosaic tile effect, designer sink and laid-back mood lighting, which gradually illuminates so that you’re not startled when you go to the toilet mid-flight. This was one of the things that really made me question whether I was actually onboard a plane, and not in a swanky hotel/restaurant. 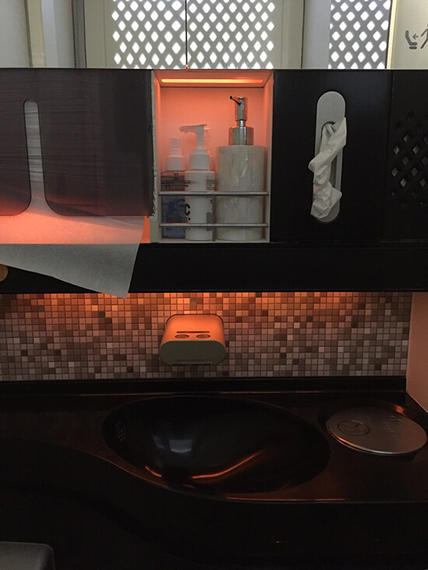 Speaking of food: the choices on the flight seemed limitless. The onboard Food and Beverage Manager came over to each passenger to introduce himself and explain the extensive menu – just like a waiter in a posh eaterie. There was a full a la carte menu for lunch with a choice of four starters and four mains, followed by dessert, petit fours and coffee/tea.

We also got to try the ‘Eat Anytime’ menu, which offered further options from warm cookies to steak sandwiches.

I opted for Etihad’s famous mezze platter and, in a nutshell, the food was exceptional. It was clear everything was plated fresh in the galley: no reheated aluminium here. What really stood out for me was the presentation; it felt like we were eating in a trendy restaurant, not to mention everything was brought directly to us – never served from a trolley or on a tray. 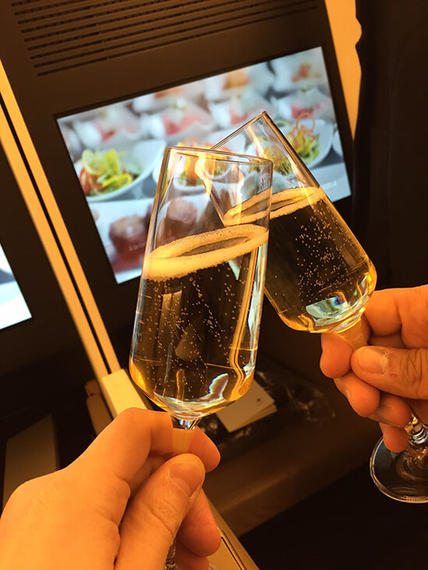 At the end of the day it was the small things that really stood out for me.

The service was second to none. The Cabin Manager introduced herself personally to everyone, learnt the names of all the passengers and regularly (but not too regularly!) checked to see how I was doing throughout the flight.

And I liked that, before landing, I was thoughtfully given a small card with the gate number of my connecting flight. I also loved the turn-down service which included a mattress, luxury pyjamas, slippers and an amenity kit, which came in various designs (there are six you can collect). The kits also come with a small handy LUXE City Guide, telling you all about the various cities that Etihad flies to. 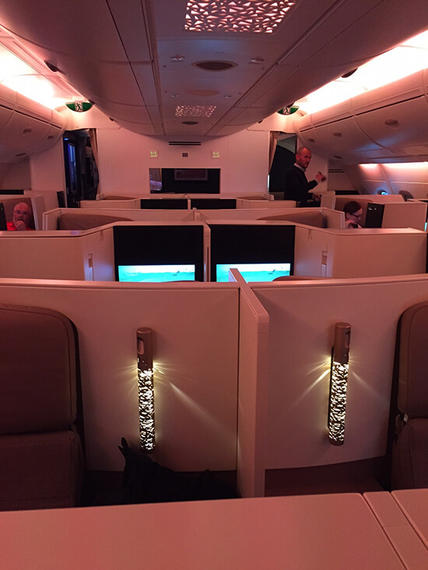 After the quick flight to Abu Dhabi, I had a haircut in the lounge and a pedicure (why not?) and, tried some fresh sushi and more Champagne before it was time to board the Dreamliner. The look and feel of the interior was the same as onboard A380, while the seats were identical, maybe a fraction smaller.

What was noticeably different however, was the size of the windows and the cleanness of the cabin air. After sleeping nearly seven hours, I woke up actually feeling refreshed and not dehydrated like I often feel after a long flight. The food and beverages, as well as the service, were equally impressive. 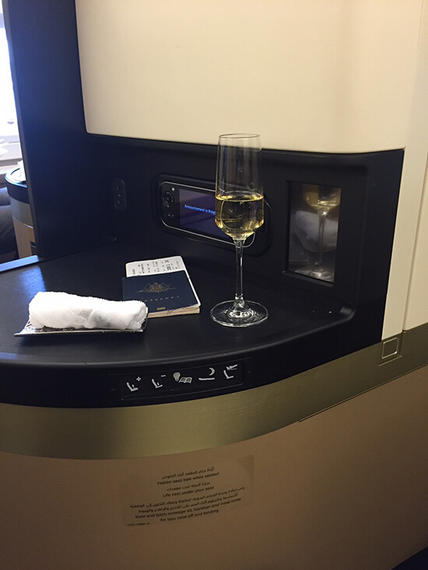 It was hard not to be incredibly impressed. Case in point: halfway through the flight to Abu Dhabi I went to the onboard lounge/bar area for some afternoon tea (casual scones and a real mint tea!). Here I met a young 24-year-old miner from Southampton. He told me all about how he works six-week stints in Western Australia and travels back and forth to see his wife and young daughter. He explained that he was already on his third flight this year from London to Perth and that he only ever flies Etihad First Class or, if that’s full, Business Class. He would never consider any other airline. I now understand why.

If you’re looking for a modern, contemporary airline that pushes the boundaries of what is possible in airline offerings and service, than I would recommend Etihad Airways.

Mick travelled to Brisbane and Sydney with Etihad as part of our Best of the East Coast Journey. To find out about more of our tailor-made holidays to Australia, speak to one of our Travel Experts.

Mick Heitzinger is the Product Director for Flight Centre Travel Group Europe and has travelled to more than 50 countries. His passion for travel started when he travelled from his home country of Australia to Europe at the age of just 18 months.

Etihad Airways: In a Business Class of Its Own
With unparalleled luxury permeating from every corner of Etihad Airways’ premium cabins, you’ll be sure to experience the best of the best, regardless of your tastes... Read More »
The UK’s Best Airline Lounges
Restaurants, massages, saunas, champagne rooms, DJ booths - the new era of airport lounges has arrived. To talk us through the latest and greatest offerings from the... Read More »
Call:
0208 127 4273 0333 333 2211
Talk to a Travel Expert
Instant call back »We'll call you back for free
X