The Guide to Quebec: A Tale of Two Cities

If you ever need proof that daring to be different works, just head to Quebec. Canada’s French-speaking province has the same laid-back, unruffled temperament as the rest of the country, but at the same time it’s determinedly individual. Glued together (and set apart) by a distinct tongue and a unique cultural heritage, the uninitiated sometimes look at Quebec as an insular place characterised by its rolling discussions on independence.

But to the contrary – alongside these discussions (and possibly because of them) a welcoming and inclusive society is flourishing. And at the forefront are the two cities of Montreal and Quebec City, a mere three-and-a-half-hour train ride away from each other, but a world apart in almost every aspect. 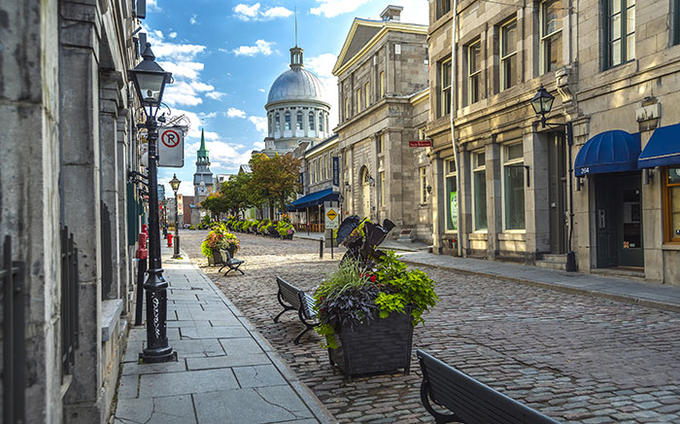 The cosmopolitan heart of Quebec. The city is wide avenues, high-rise behemoths and leafy suburbia all rolled into one. It’s a city where old stone walls and shiny new glass exteriors stand uncompromisingly close together, staring each other down just millimetres apart. It’s a city that envelops the peaceful oasis that bides on the hillsides of Mount Royal. It’s also a city that enjoys life. Home to over 90 festivals during the year, there’s a steady stream of anticipation in the air that has the power to intoxicate any visitor and make them stay for way longer than they intended.

WHERE TO GO... FOR LUNCH? Pretty much anywhere. Montreal has the culinary finesse of a Michelin kitchen, and a particular knack for Kamouraska lamb and, yes, poutine. For something quick, easy and unbelievably tasty, stop at the iconic Schwartz’s deli (queuing may be necessary).

WHERE TO GO... FOR VINTAGE BUYS? The Plateau. Montreal’s trendiest neighbourhood does a lot of things right, including outdoor spiral staircases (you won’t know you want one until you see one). It also has vintage shopping down to a tee. Set aside a couple of hours and head to Eva B for the ultimate experience.

WHERE TO GO... FOR SUNDAY STROLLS? Head up to the top of Mount Royal for a view over the city, then make your way down slowly past Beaver Lake. As you come further down, you’ll start hearing the faint sound of the Tam Tams, an informal (and free) drumming session that starts up in Mount Royal Park every Sunday.

WHERE TO GO... FOR CUSTARD TARTS? Little Portugal. Thank me later. 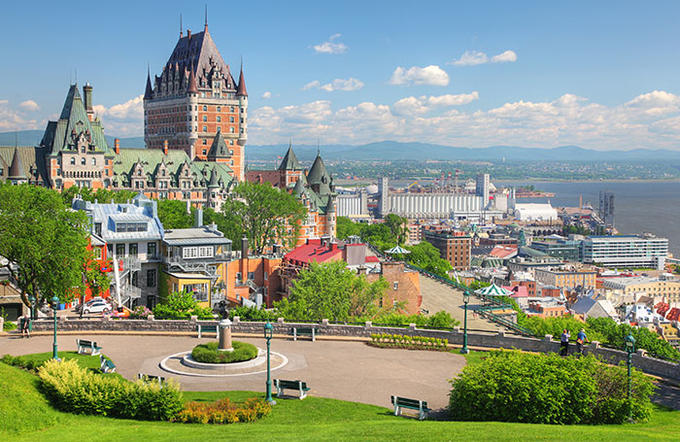 The soul of French-Canadian identity. Take a figurative leap over the Atlantic Ocean and a very literal train journey to arrive into Quebec City, as quintessentially European as any town you’ll find north of the Mediterranean. The Château Frontenac – a hotel that’s been convincingly posing as a castle for 125 years – serves as a stunning focal point, overlooking almost the entire city from its perch on the hilltop with its Hogwartsian (a coined term — I checked) turrets. There’s also the old city walls, the narrow cobbled lanes and a wealth of libraries and galleries adding to the irresistible old-world charm of the place. You could see it all in a day, but this is not a city to be rushed. Plan a weekend here at least. You won’t regret it.

WHERE TO GO... IN WINTER? The historic Plains of Abraham is located to the south east of Château Frontenac on the St Lawrence River. Once the setting of a pivotal battle in the Seven Years War between the French and the British (and so the history of North America), it now serves as the a popular spot during the Winter Carnival for skating and snowshoeing activities. Sub-zero never looked so good.

WHERE TO GO... FOR FOOD? The city is arguably even tastier than Montreal, so you can’t go far wrong. Avenue Cartier is a sure winner though, a street in the Montcalm neighbourhood with great bars and restaurants, as well as giant street lampshades.

WHERE TO GO... TO TRY LOCAL FARE? The Marche du Vieux-Port de Quebec is a farmers' market in the city’s Old Port. As well as fresh fruit and vegetables, there’s also plenty of stalls serving up free tasters of chilled pear cider (pure heaven), maple whiskey and just about all other conceivable maple-based liqueurs.

WHERE TO GO... FOR CULTURE? Just look around! Head to the Musée National des Beaux-Arts for art installations, make for the annual Quebec Film Festival in September for international feature and short film or, for a tour of Quebecois history, make for the army barracks-turned-prison-turned-college-turned-library Morrin Centre, run by the Literary and Historical Society of Quebec.

Check out our range of Canada holidays and book your trip to Quebec today!

Canada
An Expert's Guide to Eastern Canada and the USA
“Amazing cities, history and culture, stunning lakes, mountains and national parks, and an abundance of nature. They’ve got it all!”As you can tell, Dominique... Read More »
Canada
Wild Card: 9 Days in Eastern Canada
For first-time visitors to Toronto, the city may look oddly familiar. This might be because it often plays body double for New York and other big cities in Hollywood... Read More »
Call:
0208 127 4273 0333 333 2211
Talk to a Travel Expert
Instant call back »We'll call you back for free
X