Lego figures travelling the world: surely this is the kind of stuff Instagram was made for? It certainly seems that way for this month's Instatravellers Craig and Lindsey, who's instagram account @Legotravellers has nearly 16,000 followers! We caught up with Lindsey to find out all about the Scottish couple's journey from finding Lego in the loft to becoming a viral travel sensation to moving to Australia. 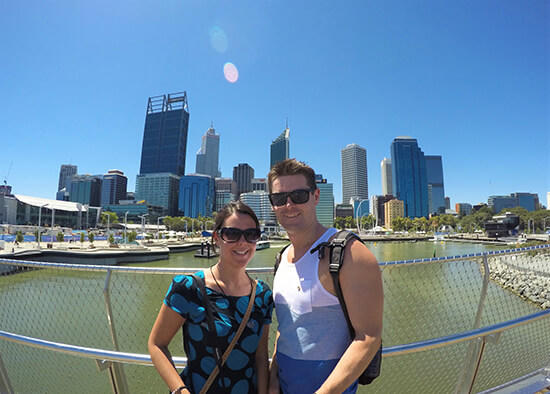 So Lindsey, how did it all begin?

It began at the end of 2012 when Craig discovered his old Lego collection while clearing out his mum's attic. He enjoyed playing with Lego as a child and his mum thought it would be fun to find all the parts for a Lego pirate ship that he used to like playing with, so they started to piece it together. He had always wanted a Lego village so, at almost 30 years of age, Craig started to buy all the pieces he couldn't afford as a child, and rediscovered his old love for Lego!

During this time, he was also thinking of things to get me for my 30th birthday when he came across a little Lego camera. This gave him some inspiration! We like to travel as much as we can and whenever we visit a new city or go somewhere on holiday, I always have the camera for taking pictures and Craig carries the map and a bag with all our things. So he made two Lego mini-figures to represent us: "Lego me" with the miniature camera and "Lego Craig" with the map and rucksack! That was the first gift he gave me in Paris for my birthday (the trip to Paris was also quite a nice gift too!).

When we were out sightseeing during our time in the city, we took a few pictures of "Lego us" with some famous landmarks (Eiffel Tower, Notre-Dame Cathedral etc.) in the background and Craig joked about making a Facebook page for them! The following month, in February 2013, we created the Facebook page. It started as a bit of a joke, with mostly our friends and family liking the page, but slowly we began to gain more followers from all over the world! Shortly after we joined Twitter and created an Instagram account to showcase our increasing gallery of pictures, both of which have also gained a very large following.

Have you both always been passionate about travelling?

We are both very passionate about travelling. When we came to Australia in 2013, this was Craig's third time visiting. Prior to that, since meeting in 2010, we liked to take around two or three holidays per year to different places in Europe. Sadly, some of this was before we came up with the idea for Lego Travellers so they did miss out on some places –hopefully we will return to them one day!

How many countries have they visited?

Do you ever get strange looks setting up the shots?

We try to take most of our shots when there is no-one around, as it can sometimes be time consuming getting the picture just right, not to mention it's frustrating when people step into the shot last minute! Obviously this is unavoidable when visiting a busy town or attraction, so we just try and find a quiet spot to set up our scene. We always get a great response from our fans when the photo is something they can relate to (ie. a well-known city or famous landmark).

Do you have a favourite image/location?

We really enjoyed our recent trip up north to Shark Bay with our family. It gave us the chance to see new places in Western Australia and also to incorporate more Lego figures in our shots, to represent our family members!

What’s the most adventurous thing they have done?

Our road trip across Australia was probably the most exciting and adventurous part of the journey so far: we drove all the way from the Gold Coast in our campervan, across the Nullarbor Plain and around the coast to Perth. One day we hope to visit the Northern Territory and continue around the rest of Australia.

Are they difficult to photograph?

The most difficult scenes to create are normally ones that involve water – we have taken a few shots which feature a Lego shark and also some boat scenes, and it takes several attempts to position these accessories correctly, and for the boat not to fill with water and sink! The angle of the shot is never an issue, we have a good camera, and are never without our smart phones when out and about, but yes, if it's a particularly windy day (which Perth is known for!) then it can be tricky. Especially beach scenes when the Lego figures are constantly being blown over into the sand – sometimes we give up on that one!

Where is home for you?

Scotland is our home, but we have been living in Perth for two years now and have been Australian residents since March 2015. Perth is our home away from home!

Do you ever put yourselves in the photographs?

The Lego figures represent us and basically do what we do (ie. they had a campervan when we were travelling Australia in our van, now they have upgraded to a car and caravan – which we've yet to use in a scene. They also sightsee, cycle, swim, surf and sunbathe when we do! Most of our shots are just for fun, like the boat / shark scenes, and we always try to create shots for special holidays like Easter, Christmas, Valentine's Day etc. We try to be creative and think of different scenes that people might like, and would never normally include ourselves in these pictures. We have had our picture taken with our Lego selves in the past. For example, when our Facebook and Instagram pages first went viral we were approached by national and worldwide press, and some journalists did ask to photograph us with the figures. That was actually quite fun to do!

Do the Lego versions of you have different outfits?