Thailand is undoubtedly famed for the beautiful islands and beaches found in the Southern reaches of the country, alongside the vibrancy and religious grandeur of Bangkok. The lively, and often party-fuelled tourism found in these parts of the country are somewhat contrasted by a very different vibe and lifestyle that can be discovered in the North.

Surrounded by Thailand’s tallest mountains, the north of the country is a lot cooler than the sweltering south, with night temperatures in the mountains sometimes dipping below freezing. The pace of life is also much slower with cultural influences reflecting the slow-paced ideals of neighbouring countries such as Myanmar and Laos.

The north may not possess the marine-based delights and boozy nightlife of other parts of Thailand, there are so many things that keep visitors engaged in the culture and natural beauty on offer. The main city is Chiang Mai, commonly known as the ‘rose of the north’. It is a culturally and historically interesting city surrounded by lush countryside and home to more than 300 temples. The most famous is Wat Phrathat Doi Suthep, situated 18 km from town. It provides the quintessential image of Chiang Mai with its large gold-plated chedi. Inside the city walls there are several beautiful temples to explore, including Wat Phra Singh and Wat Chedi Luang. The old city walls themselves make for an interesting viewing, having stood around the city for hundreds of years. Further afield from the city you can indulge in one of Thailand’s greatest lures; the elephant. The Elephant Nature Park is the best sanctuary for visitors who are invited to feed and bath ‘retired’ elephants, whilst learning more about the historical role and treatment of the animal in the country. Chiang Mai is also a fantastic place to take a Thai cooking course, with numerous options on offer to tourists. Taking a full-day course will allow you to cook up to six different Thai dishes, and of course you can eat the results!

One of the most iconic images from Thailand has to be those captured at the Loy Krathong festival which is held every November. Thousands of lanterns are released into the sky along with fireworks and a vibrant riverside parade. 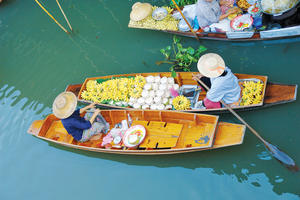 Combining the bustle of Bangkok with the charm of Chiang Mai and the relaxing paradise of Phuket, this Classic Journey offers dazzling temples and historic shrines, 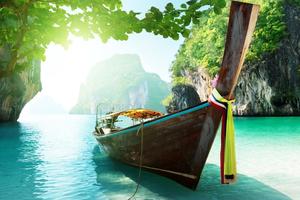 Discover the undiscovered on this relaxing Journey that takes you to three tranquil Thai islands. Spend lazy days in the sun on the glorious beaches, learn to scuba 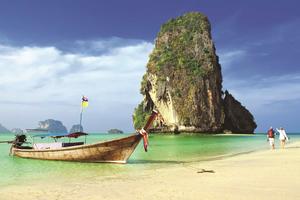 Paradise beaches, exquisite resorts and crystal-clear waters brimming with colourful marine life all lie in wait on this stylish island-hopping holiday. Decide which

A few hours North West of Chiang Mai is the charming tourism-orientated town of Pai. The town is set in a picturesque valley which offers a relaxed atmosphere along with the opportunity of engaging in various outdoor activities such as rafting, tubing, cycling, and swimming. The permanent residents of the town are an interesting mix of Western hippie types, Thai rastas, and Muslims, which, whilst not entirely traditional, provides a unique vibe for visitors.

Some of the surrounding countryside is truly beautiful, with the majority of the top sights dominated by waterfalls. Mo Paeng is the most accessible of the waterfalls. It is multi-tiered and flows through a green valley whilst possessing a number of little pools that you can swim in.

The countryside is a great place to explore by bicycle or motorbike, which both are readily available for rent. The surrounding farmland provides a less Westernised element to this area, and this is easily accessible on two wheels. Why not stop off at the Tha Pai Hot Springs to soak your well worked muscles after a morning bike ride? A little further North towards the Laos border sits the city of Chiang Rai which serves as an attractive access point to the Golden Triangle.

The city itself has a few attractions, in particular the mesmerising, and unfinished White Temple, which is as beautiful as it is psychedelic.

The city and surrounding province are home to various other temples, though none quite as spectacular as the White Temple or the more traditional examples found in Chiang Mai.

The Golden Triangle is what brings the majority of people to Chiang Rai, as well as proving a good stopover on the way to Laos.

The Golden Triangle provides some fantastic hiking opportunities to tourists in an area previously famous for growing opium. This past trade is relived in the valley of the Hall of Opium, and a special museum called the House of Opium. The triangle sits alongside three countries, Thailand, Laos and Myanmar.

In the extreme West of Northern Thailand, and another destination sitting right next door to Myanmar is the picturesque little town of Mae Hong Son.

With a population of just 7,000, there is a cosy and local feel to this town. Talking a stroll around the pretty lake and visiting some of the surrounding temples are a pleasant way to spend time in the town. But it is outside the town that provides the main appeal for tourists heading this way. One of the main reasons tourists flock to Mae Hong Son is for the popular trekking. The surrounding mountains and hill tribe villages are great places to explore and the majority of accommodation options offer tours to their guests. In the lower portion of Northern Thailand the country’s original capital, and now a popular site of ancient ruins, welcomes thousands of tourists every year. Sukhothai is a fascinating destination and a UNESCO World Heritage Site. Old Sukhothai is the official name of the ruins, and the area is adorned with crumbling temples, giant Buddhas, and pretty, green landscapes. Entering the park at sunrise is a popular element of most tourists’ itinerary here. Watching the orange glow of the morning sun bouncing off of the Buddha statues is a memorable experience. The best way to explore the park is by bicycle, and many rental places are situated directly outside the park. There are a few temple sites outside of the park which are worth a visit, including the towering Buddha at Wat Sri Chum.

Asia
Four Hidden Gems in Thailand
We all know that Thailand is a dream destination with perfect beaches, clear seas, limestone peaks and some exciting hustle in the streets of Bangkok. Areas such as... Read More »
Bangkok
5 Must Try Experiences in Bangkok
Bangkok is a bustling metropolis and the capital of Thailand. It captivates the attention of many travellers and is now the most visited city in the world by... Read More »
Thailand
Why You Should Dive in Koh Tao, Thailand
With its wonderfully warm waters, colourful coral reefs and laid-back vibe, Koh Tao, an island on the western shore of the Gulf of Thailand, is an amazing location... Read More »
Call:
0208 127 4273 0333 333 2211
Talk to a Travel Expert
Instant call back »We'll call you back for free
X