When I Climbed Mount Kilimanjaro

When the email dropped into my inbox seeking “intrepid adventurers” to climb Mount Kilimanjaro to raise money for the Alzheimer's Society, I jumped at the chance. I have wanted to scale Africa’s highest mountain for as long as I can remember and I signed up immediately, without really thinking about the consequences – or the fact that, while I’m fairly active, I’d definitely rather spend my Saturday in a café eating cake than hiking. I’ll also admit that a holiday to Mexico two days before I flew to Tanzania left me full of tacos and tequila, but rather unprepared for mountain climbing. Still, I set off feeling slightly nervous, but mostly excited for the adventure. What lay ahead was to be the toughest physical and mental challenge I’ve ever undertaken – but also the most rewarding experience of my life. Day 1: Monkeys and the Milky Way

Along with 17 other Flight Centre colleagues, I was taking on the Machame route – one of the most popular climbs due to the scenery, but more physically tough than some other paths. As we arrived at Machame Gate, it began to rain and my heart sank. I hurriedly pulled on my waterproof trousers and rain jacket, and filed into line as we began our trek through the rainforest, passing a sign wishing us luck. The drizzle soon eased as we trekked past monkeys and lush greenery during the six-hour hike to Machame Camp, which we reached at dusk. Dinner on the mountain is unlike anything I have experienced before. We were served cucumber soup, a huge plate of spaghetti Bolognese and endless bread and butter. Cleaning my teeth by my tent afterwards, I looked up and audibly gasped. I have never seen a sky like it; a tapestry of stars stretched overhead and even the Milky Way was visible. I had to force myself to tear my eyes away and get to bed. 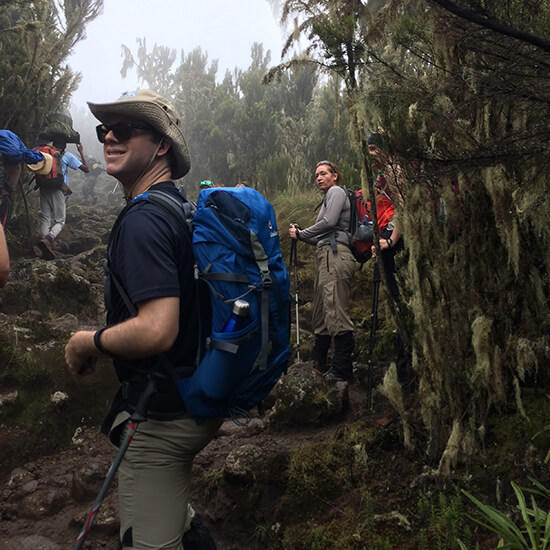 We were woken early and served a breakfast of chocolate porridge, eggs, doughnuts, fruit and bread. It would have been a foodie’s dream, except I had arisen with heartburn and, though I didn’t admit it to anyone (yet), I was feeling quite sick. I shoved down as much food as I could before we began hiking through the rainforest once more, walking from 2,835 metres to Shira Camp, which stands at 3,850 metres. The terrain was fairly steep and we watched the landscape change from leafy forest to moorlands shrouded in cloud. We were encouraged to eat snacks at every break, but I was only managing a few mouthfuls of cereal bar. When we reached the camp, I sought out my tent and immediately lay down. However, I was quickly coaxed out by the sounds of the porters and guides singing. All 45 of them put on an amazing show, pulling each of us up to dance. I stopped to take in the surroundings – Uhuru Peak, the fluffy clouds below us, the luminous tents – and I felt a surge of determination that this mountain wouldn’t beat me. 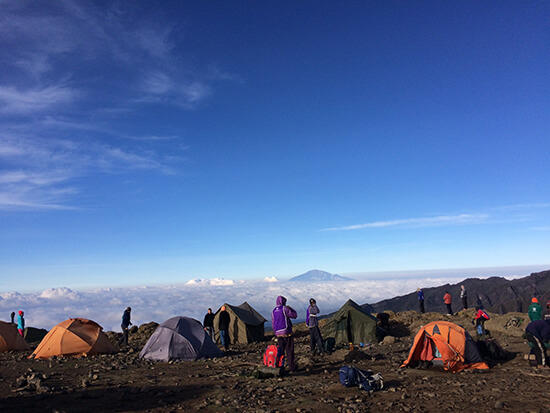 “How are you feeling Tess?” called out Tom, one of my fellow hikers, as we quickly washed our faces in the bowl of water provided tent-side by the porters. I was delighted to say I felt hungry and I feasted on as much as I could for breakfast. I was going to need it today – we were hiking up to Lava Tower, which stands at 4,600 metres. I was feeling great as we set off; but by lunchtime, I felt terribly sick and I slumped on the ground at the tower as everyone tucked into their packed lunches around me. I honestly think if it hadn’t been for the team, I wouldn’t have been able to carry on. When I shed my first mountain tears at this spot (I blame the altitude), my fellow climbers rallied round with ginger tea, a Reese’s Pieces cupcake and plenty of hugs. 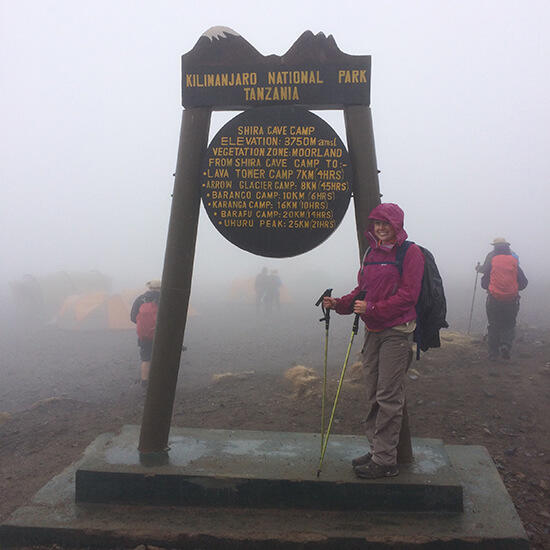 We began the day with a steep traverse up the Barranco Wall; a 257-metre rock face leading to the top of Karanga Valley – not your typical Thursday. We were helped up huge steps and tricky rock formations by the guides, who were always there to offer a hand. After reaching the top, it was almost immediately back down over slippery terrain to Karanga Camp, where we were treated to chicken and chips. The heavens opened as we trekked on up to Barafu Camp, and the air was noticeably thinner. I found myself getting out of breath walking from my tent to the mess tent, and, despite knowing I needed the energy, I just couldn’t bring myself to eat the macaroni cheese, so I munched on some shortbread and went to bed feeling incredibly apprehensive about the long night ahead. 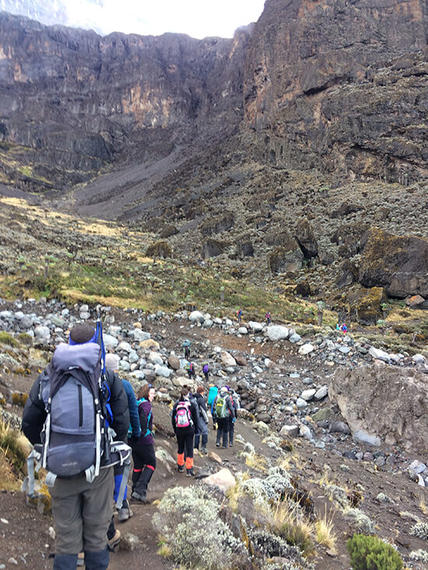 We were awoken two hours later at 11pm and hurriedly dressed in multiple layers, pulled on our head torches and began the slow trudge up the volcanic cone known as Kibo, over the snow-flecked ground. The path was pitch black, aside from the odd group of head torches ahead, zig-zagging towards the sky. We were encouraged to keep moving – one foot in front of the other, keep up with your neighbour, drink, eat. One of our guides, Danny, asked me how I felt. “Sick,” I replied. But he looked me over and encouraged me I could do it, so on I trudged.

When we stopped to rest, I ate half a jelly baby and plugged in an iPod one of the team had lent me. I couldn’t tell you what songs I listened to, but the rhythm kept me going. The sun began to rise as we reached the crater rim and I forced myself to look up. The scenery was breathtaking; it’s hard to put into words. The orange glow reflected off the bright-white snow-covered ground and pillowy clouds, and it was completely silent. We rested briefly at Stella Point, where more than 60% of climbers stop and don’t make it to Uhuru Peak. I was determined not to become one of them, but everything hurt and I was running on empty. I felt like I was in a dream. Adrenaline somehow took over and I pushed on with my team. The final climb felt never-ending. I was stopping every few paces to catch my breath, and the summit seemed to be getting further away. When the sign finally came into view at 10am, I hugged the team and slumped onto a rock. I felt emotional, relieved and exhausted. I was also desperate for my tent. It sounds silly, but I hadn’t even thought about the descent and several of us were now feeling the effects of altitude sickness. I have never been more grateful for my porter; he carried my bag and assisted me back down to Mweka Camp – a three-hour hike through a snow blizzard. 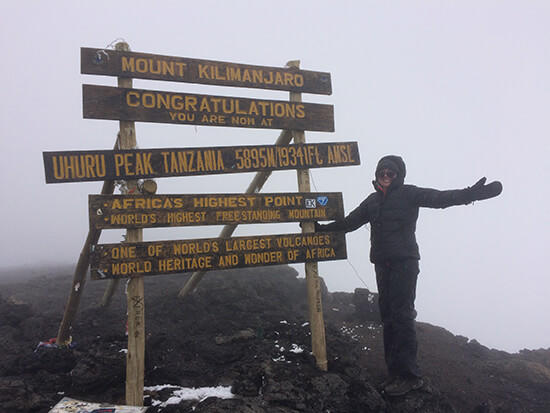 We faced a final six-hour trek the following day to the gate, and I shed a few more tears when our porters, or ‘G Fighters’, sang to us and bid us farewell, the mountain illuminated in blazing sunlight behind them. I couldn’t quite believe that, after nine months of planning, I had pushed myself beyond my physical limits and done it. It was hands down the toughest experience I have ever undertaken, but in many ways, it was the best week of my life. I made lifelong friends and I will never forget the overwhelming sense of pride and achievement when I realised I’d made it to the roof of Africa with them. Looking for a challenge? Make an appointment with one of our Travel Experts today and they'll help you choose the right Kilimanjaro trip with one of our touring partners like G Adventures or Intrepid.

Tanzania
How to Prepare for Climbing a Mountain
When I told my friends and family I was planning on climbing Mount Kilimanjaro, they reacted with a mixture of shock, disbelief and mild amusement. While I’m not... Read More »
Japan
At the Top of Japan: Climbing Mount Fuji
Arriving at the base of Japan’s highest mountain, we were excited yet admittedly a little naïve of the task ahead, tells James Pierce. We expected to see the... Read More »
Call:
0800 587 0058 0333 333 2211
Talk to a Travel Expert
Instant call back »We'll call you back for free
X