Tales from Western Canada's Rockies in the Winter

“You can drive your car on it,” says a reassuring local, catching my fleeting hesitation as I step out on to the snow-covered ice of Lake Louise. Of course, I needn’t have worried. Dozens of people are already shuffling around on the frozen surface. The intense brightness of reflecting sunlight forces me to squint to take in the dramatic winter landscape of the Canadian Rockies. 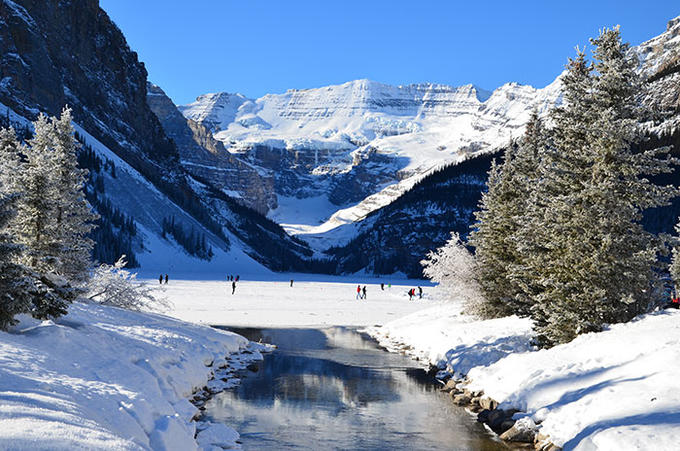 The Devil’s Thumb, thrusting upwards to an imposing height of 2,458 metres, and Fairview Mountain, named for the impressive vistas from its 2,744-metre summit, count among the icy peaks rising high above Lake Louise, which sits at the breathtaking altitude of 1,750m above sea level. The lake, much of which is ringed by snow-dusted spruce trees, was named in honour of Queen Victoria’s sixth child, Princess Louise Caroline Alberta, after whom this Canadian province is also called.

The mountains here are part of a vast range stretching all the way down into New Mexico. They form the Continental Divide that shepherds meltwater westward, through British Columbia into the Pacific, or eastward towards the Atlantic Ocean. One of the most spectacular ways of gaining an overview of the undulating landscape is by swooping over it during a helicopter sightseeing ride. Arguably the most exhilarating is to burrow beneath a blanket while dog sledding. Gorgeous, long-haired huskies pulling the sleds relish the challenge of hauling guests through Kicking Horse Pass – named after an incident involving an explorer and another type of pack animal – to Yoho National Park. 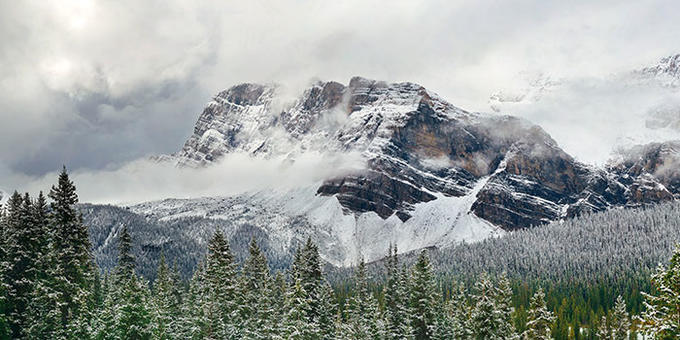 From winter to springs

Banff National Park is Canada’s oldest of its kind, established in 1885 to conserve land around the naturally heated thermal springs discovered on Sulphur Mountain by railway workers who were enjoying a break from constructing the Canadian Pacific Railway. That monumental railroad soon began bringing tourists to the park, which in February saw the reintroduction of bison after an absence of more than 130 years. Tours of the Cave and Basin National Historic Site, featuring a swimming pool built in 1916, allow you to experience the story of the springs. Nothing, though, beats the feeling of sinking into the waters of Willow Stream Spa at the Fairmont Banff Springs hotel.

During a self-guided heritage tour, I admire the heraldic crests within the grand Mount Stephen Hall of the castle-like hotel. The 764-bedroom property has the distinction of being in a national heritage area, and is reputed to be haunted – but fortunately on this occasion the legendary ghost bride does not make an appearance. 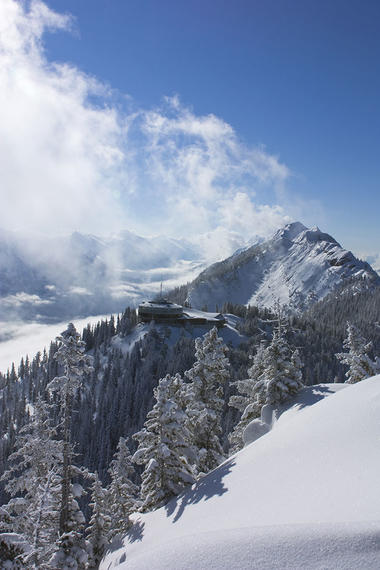 The powder snow that settles in this part of Canada is far easier to carve through than any of the European pistes I’ve skied. Lake Louise, where the longest run descends for 4.9 miles, was named Canada’s best ski resort at the World Ski Awards from 2013 to 2015. The runs at Sunshine Village, meanwhile, are open seven months of the year, the longest non-glacial ski season here.

Sometimes, though, uphill journeys are the most rewarding. Snowshoeing allows me to pause at will to take photos of the Bow Valley and, surprisingly, it is far less cumbersome than I’d imagined. Taking the Banff Gondola to the observation deck at the 2,281m-peak of Sulphur Mountain is a way of appreciating views of the nearby town and National Park. 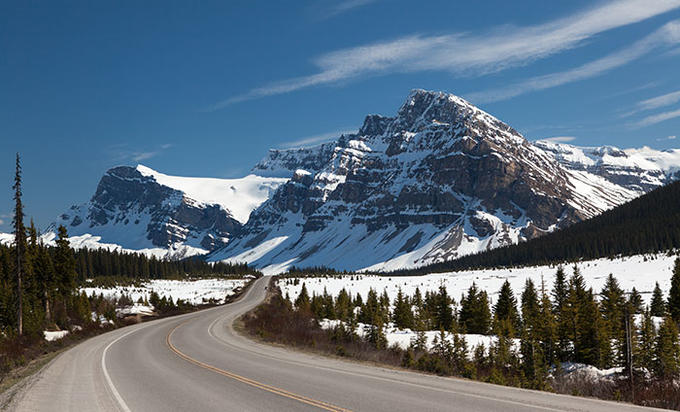 Even in winter, driving on the relatively empty roads of Canada is a pleasure. One of the most spectacular routes is the Icefields Parkway, running between Lake Louise and Jasper and past more than 100 ancient glaciers. Driving non-stop, it would be possible to complete the journey in three-and-a-half hours, but the scenery warrants frequent pauses and makes it easy to understand why the mountain parks of the Canadian Rockies are a UNESCO World Heritage site.

The Journey between Banff and Calgary takes 90 minutes along the Trans-Canada Highway. Calgary may be best known for its annual Stampede, but it’s a young, cosmopolitan city whose buzzing culinary scene embraces the best of both past and present. It’s typified by the open kitchen of Shokunin, a downtown restaurant where chef Darren MacLean and his team prepare Japanese-style dishes made with grass-fed Alberta beef and other delicious ingredients from Canada’s west. 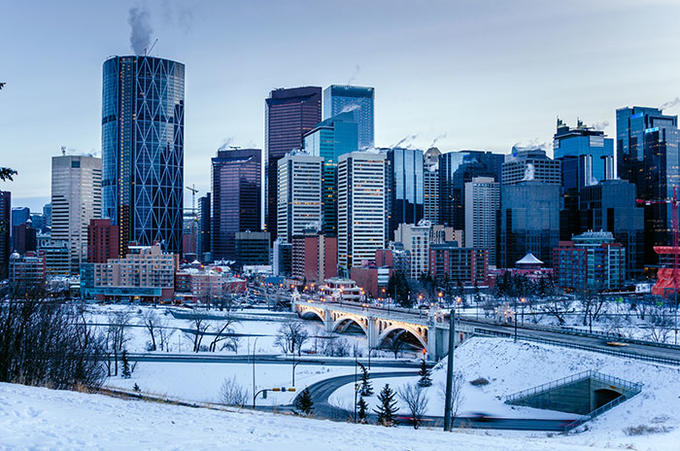 I learn about the city’s evolution at the impressive Glenbow Museum, where the majority of my time is spent viewing exhibits on indigenous heritage and culture. I then head to the East Village, where the 2016 opening of Studio Bell, the home of Canada’s National Music Centre, has played a key role in revitalising the area. The Rolling Stones Mobile Studio, used to record Deep Purple’s Smoke on the Water, is one of the star exhibits. My last stop is the Cold Garden Beverage Company, one of Calgary’s recently established microbreweries, for a well-earned tasting flight. With Alberta’s craft beer scene booming there are plenty to choose from, and lots worth raising a glass to in this part of Canada.

I’m a travel writer and professional photographer based in the north-east of England. I love exploring the world to experience the soul of destinations and capture snapshots representing the places I visit. Have a travel recommendation for me? Tweet me @stuartforster.

Canada
10 Things I Ate in Canada
Canada is perhaps not the first country that springs to mind when you think of culinary excellence, but it should be. On a recent trip to Ontario, I gorged on... Read More »
Adventure in Western Canada: Jasper & Banff
Having departed Vancouver two days prior, Alexandra Gregg continues her journey across Western Canada – keeping a keen eye out for bears in... Read More »
Call:
0208 127 4273 0333 333 2211
Talk to a Travel Expert
Instant call back »We'll call you back for free
X