Flight Centre Travel Blog/Piecing together the Ruins of Pompeii

Piecing together the Ruins of Pompeii

Today's  blogger, Emily Ray, shares a magical glimpse into the past in Pompeii. If you're looking for a European adventure, there is now up to 50% off our summer adventure tours.

On the morning of 24th August, 79 AD, Mount Vesuvius erupted, spurting out enough gas and pumice over the next 24 hours to cover the city of Pompeii in seven feet of ash. Today, Pompeii is one of the world’s most popular archaeological sites and, luckily for us, it’s not too difficult to get to. Ideally situated a 30-40 minute train journey from both Naples and Sorrento, Pompeii makes a convenient day trip – and an affordable one too, with a return train ticket from Naples costing just €4.80. 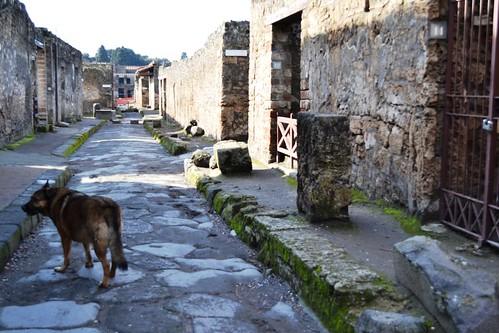 Pompeii isn’t the most navigable of places, with five square miles of a maze of uneven, cobbled streets to explore and ruins to discover. At times, I felt like a mountain goat as I nimbly hopped from step to step. With pillars randomly dotted around, it’s hard to piece together a city that’s so radically different from a modern town, which is why I would recommend making use of a tour guide if you want to delve into the city just that little bit more.  The Pompeii Tourist Office offers English speaking guides for just €20 per person for a two hour tour which we found really brought the place to life and helped orientate us amongst all the ruins.

If you’re braving it on your own, however, there are a few key sites you should visit in order to make the most of your trip.

When you think of Pompeii, one of the first things you think of is the plaster casts of bodies frozen in time at the moment of Vesuvius’ eruption. The Garden of Fugitives is the final resting place of 13 such bodies, their last movements captured in the plaster moulds. Witnessing the bodies of those who were trapped brings a certain eeriness to the historical site. Also captured in the plaster is evidence of the difficulties facing the victims’ failed escape, such as injured limbs that prevented them running from the volcano’s fumes. 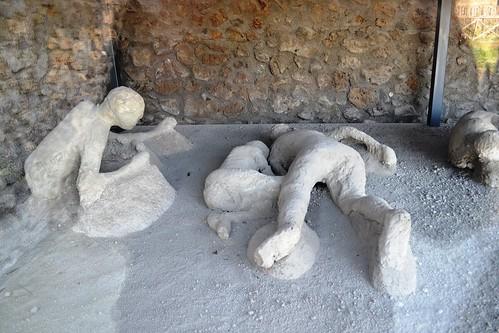 It’s hard to miss the Amphitheatre, located in the South Eastern part of the city next to the Gladiator barracks. It’s thought to be the earliest known permanent stone amphitheatre in Italy, and at the time was a strikingly impressive building, seating around 20,000 people from neighbouring cities.  Gladiators fought both each other and animals, leading to scenes not too dissimilar to those found in Ridley Scott’s 2000 film Gladiator. Stray dogs can usually be found snoozing in the amphitheatre’s shade, and have become fondly known by locals as ‘The Guardians of Pompeii’. 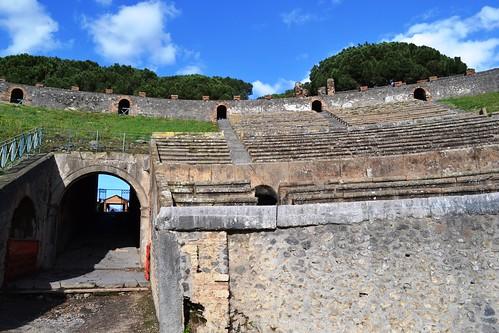 Depending on when you visit, you may need to keep a flexible itinerary. We visited in January and, although the sun was shining for us, previous bad weather had left some areas a no-go for tourists. The largest house in Pompeii (the House of the Faun) was one such place we couldn’t gain access to in order to see some of the city’s most beautiful architecture and well-preserved artwork. However, art history fans should head towards the Villa of Mysteries – ironically the first building to be hit by the volcano but the best preserved – which houses some pretty spectacular frescos to feast your eyes on. If you’re expecting a house of exciting secrets then you may be slightly disappointed – the house is so named for its stunning wall paintings in one room which apparently depicts a young woman’s progression into marriage. 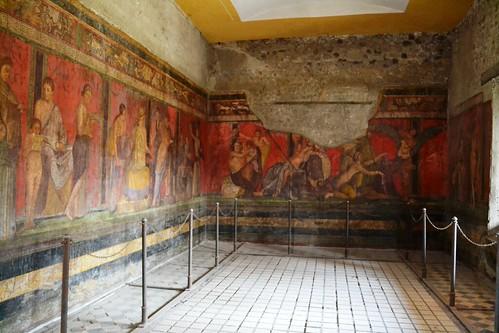 When in Pompeii, it’s best to explore as much as you can of the ruins, as you never know what you’ll stumble across. The two tiered Lupanar of Pompeii seems fairly innocuous until you step inside – the most famous brothel (of approximately 28!) in the city has a selection of erotic paintings on the walls which served as a visual catalogue for visiting clients. On the other hand, there are some hidden gems that stunned me when I found out their use – for instance, fountains can be found on most of the streets, and were quite ingeniously designed. For a start, when the fountains were full, the front stone would be moved in order to allow the water to rush out and flood the street, cleaning it on its way down. (At the time of the eruption, the coast was far closer to Pompeii, and so the water would simply flow back into the sea.) And the huge boulders you see sticking up on the streets? They’re actually huge stepping stones for Romans to walk on while the streets were being cleaned! 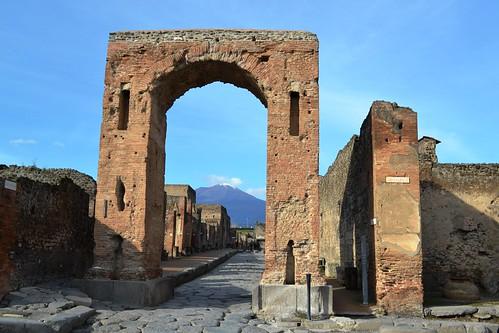 After a full afternoon exploring the ruins of Pompeii, we bid farewell to the ancient city and returned back to our base in Naples. Exploring an archaeological site of such historical significance offers a magical glimpse into a city concealed for almost two thousand years – something that the history textbooks just cannot compete with!

To find out more about travel to Naples & Pompeii, visit our website and take a look at our European tours with 50% off! .