The ultimate celebration of love, a wedding can also show a country’s true cultural colours. Sophie Ibbotson loses her heart to India on a unique adventure...

I could hear it long before I could see it. The jangling cacophony of bells, car horns and a full brass band was inescapable in the sticky-sweet evening air, where the scents of jasmine and incense mingled. As the sound came closer, even the street cows knew to move aside. Gridlocked traffic miraculously dispersed and in its place, mounted on a horse, a filmstar-like figure in glittering gold rode at the front of his wedding procession. India’s grooms know how to make an entrance. How could any bride fail to be impressed? 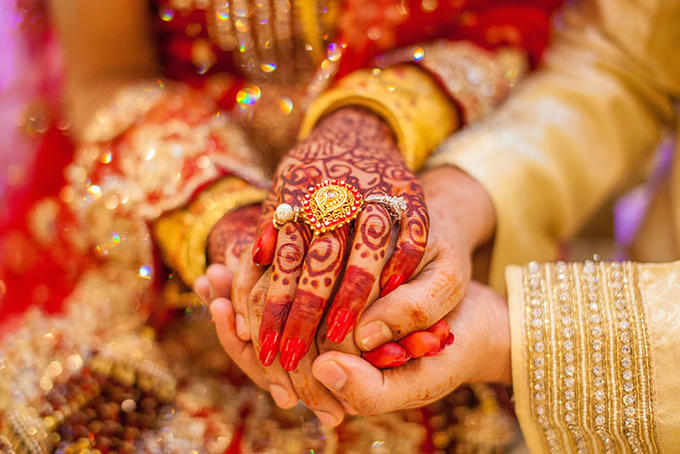 There’s certainly no single ‘authentic India’, but this was the fairy-tale spectacle I’d imagined since childhood. My grandmother’s jewels, the vibrant sari in a dressing-up box, peacock feathers and a handful of painted wooden elephants were the foundations on which I’d built a mental picture of the country. And on this hot, sweaty monsoon night, my dreams became incarnate.

The Land of Kings

When India became independent in 1947, dozens of princely rulers lost power, but their palaces, fortresses and overwhelming cultural influence remain. As I travel through the desert state of Rajasthan, meaning the ‘Land of Kings’, it seems even the smallest town had its own royal family. Their opulent homes – often still inhabited by the original occupants – are preserved as museums and monuments, or have been converted into luxury hotels.

The state’s capital, Jaipur, is known as the Pink City because Maharaja Sawai Ram Singh II ordered that the entire Old Town be painted a dusky hue – a colour of welcome and hospitality – for the visit of the Prince of Wales in 1876. The iconic Hawa Mahal, the Palace of Winds, was built in a soft pink sandstone in 1799 and no doubt had a hand in the new colour scheme too.

The Hawa Mahal’s architecture is gloriously over the top, with some 953 carved window niches spread across its five-storey pyramid-like facade. It was built as part of the zenana (the women’s quarters) on the edge of Jaipur’s City Palace. Looking up, I can imagine the royal women gazing down through the lattices at an out-of-reach life on the street below. 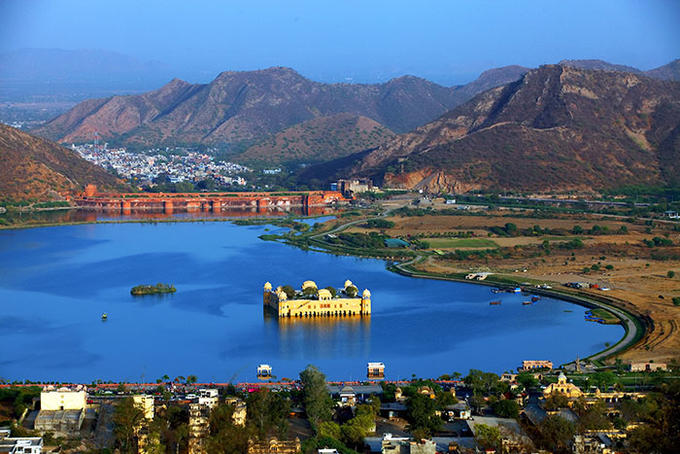 Jaipur really is a city of palaces. Besides the City Palace, there’s the Jal Mahal in the middle of a lake – its reflection on the water’s surface captivates me even more than the building itself. The impressive Rambagh Palace, the official residence of the last Maharaja of Jaipur, has hosted everyone from Lord Mountbatten to Prince Charles. It’s now the jewel in the crown of the Taj Hotels group, and a few minutes’ walk from Jaipur Riding & Polo Club, where teams still play the sport of kings.

But arguably the most impressive of all Jaipur’s palaces is outside the city limits. The Amer Fort – a dramatic edifice of yellow sandstone and marble – perches in a strategic location atop a hill. Enter through
the Sun Gate and a courtyard that’s hosted uncountable victory parades, then explore hall after dazzling hall. Magnificent frescoes decorate gateways, doors are covered with embossed silver, and in the aptly named Mirror Palace every surface is embellished with glass and mosaic. If someone could dream it, Jaipur’s maharajas built it. Money was never an object. 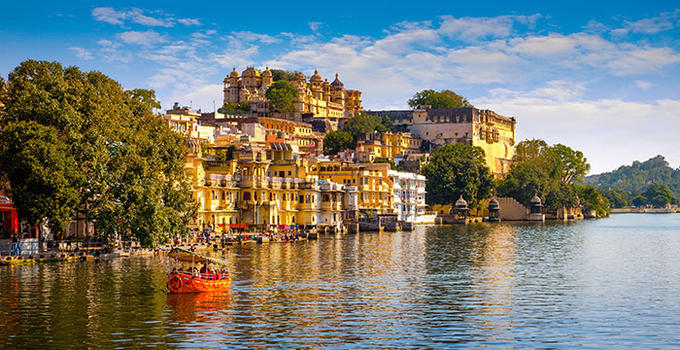 The city on the lake

If Jaipur is the city of kings, Udaipur is the city of merchants. Their towering havelis (mansions) ring the lake, looking out at the water but secluding family members and wealth within their hidden courtyards.
All eyes gaze towards the Lake Palace, the 18th-century palace-turned-hotel in the centre of Lake Pichola, which gained fame as the home of Bond villain Octopussy.

Start the morning on the lakeshore, walking along the ghats where children bathe and women wash their clothes. Listen to the tinkling of bells from one of the many Hindu shrines, and pause to witness the aarti, a religious ritual with dancing flames and songs of praise. 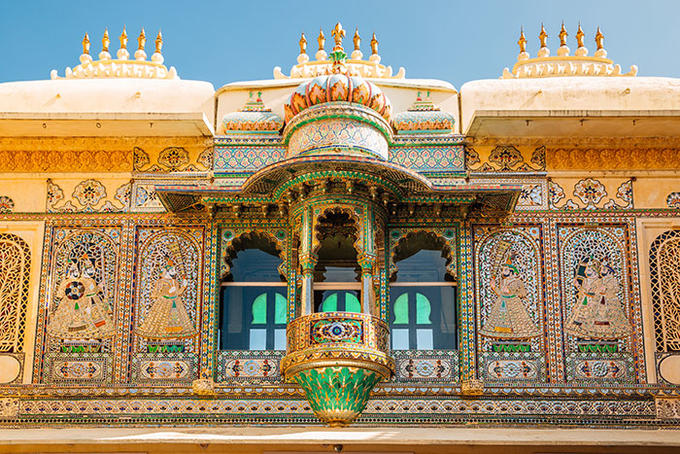 This almost spiritual start to the day readies you for what is to come: the exhausting yet addictive chaos of Udaipur’s labyrinthine streets. Approaching the City Palace or Jagdish Temple, pilgrims and cows, shoppers and tourists, mendicants and holy men all jostle with one another, raising their voices to be heard above the din. The energy of these crowds makes my pulse race and draws me in. All of humanity is squeezed into Udaipur’s Old City, and the people-watching is second to none.

For respite I slip into one of the many shops whose wares are spilling out onto the street. Squatting on the floor beside a vast pile of wedding saris, a shopkeeper lays out textile after textile, each more ornate than the last. I hold a glass of sweet masala chai, sipping as I browse. Should I choose the skirt with the peacock motif? Is the explosion of rainbow-coloured sequins really me? The questions are immaterial; I know that when I leave, it will be with an armload of spectacular fabrics. 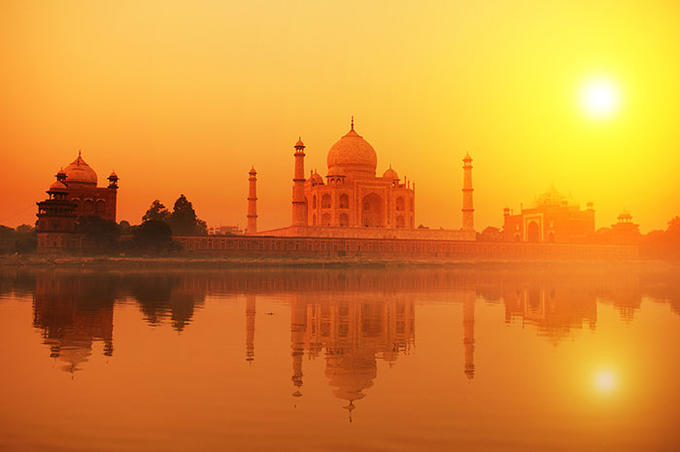 A monument to love

I’ve talked of palaces and fortresses, of temples and bazaars. But India has an icon that stands above all else, and the world’s greatest monument to love is equally a monument to sorrow. Mughal Emperor Shah Jahan’s Taj Mahal stands alone in its gardens on the bank of the Yamuna River at Agra, the white marble of its facade and dome studded with precious and semi-precious stones.

His love story began well before the first stone was laid. Mumtaz Mahal was the daughter of a Persian noble and her marriage to Shah Jahan was a love match. They had no fewer than 14 children, but Mumtaz died during her final labour. Shah Jahan’s hair is said to have turned white with grief, and he commissioned for his wife a mausoleum without equal; its construction took 22 years.

The architecture is a nod to her Persian heritage, and the light on the tomb changes throughout the day; it’s at its most beautiful at first light, and as the sun’s rays fade. Sit in a quiet part of the gardens among the roses, and reflect on the wonder that is love. 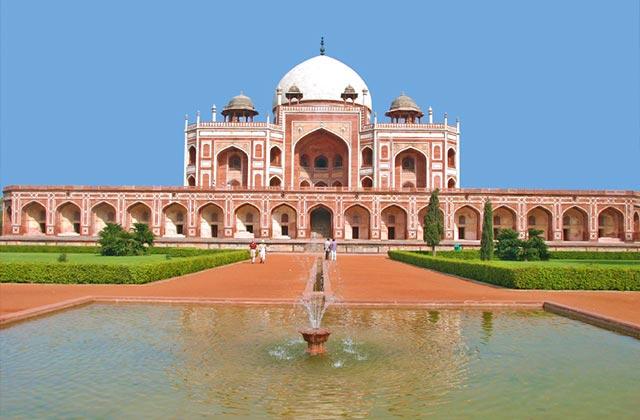 In Delhi, the skyline tells the tale of seven cities, each built atop the last. But I’m not here for its layered history and ghosts of the past. Instead, it’s time for a wedding, for two families to start building a shared future. And in India, marriage is very much a family affair. If you’re struggling to find your perfect match, you need an Indian aunty, who comes with a network of Indian aunty friends.

An arranged marriage here is still the norm, and it’s the extended family who scout out and whittle down suitors. Tonight the groom arrives on his steed, looking quite the fairy-tale prince. We’re on the third or fourth night of celebrations, known as the baraat. The music is blasting, and the groomsmen are in a party mood – they’re meeting the bride’s family for the first time. I’m stood with the mother of the bride and, though we’ve met only once before, she indulges me like a favourite niece. When the groom comes before us, he bends to touch her feet. She responds to this sign of humility by applying a tilak mark to his forehead, warding off the evil eye. 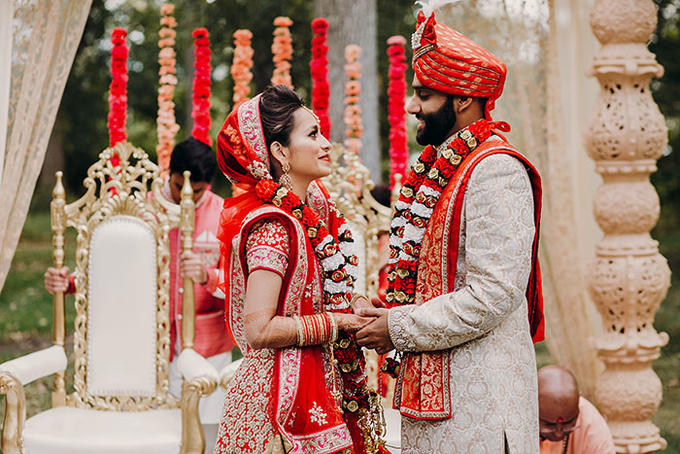 At last it’s time to give away the bride; a tradition that transcends cultures. In a hymn we invoke the god of love, and the bride and groom take each other’s hands beside the sacred fire. To be married, they must take seven steps together, each one marked with a vow. With the eighth step, everything changes. Now they are man and wife.

Did you know? Attending an Indian wedding is just one of the immersive Creative Travel Journeys we offer in India. Speak to one of our Travel Experts to find an experience that’s right for you, whether that’s joining a Camel & Cultural Extravaganza or dining at The Emperor’s Table.