By the miracle of modern technology, midway through my flight along the coast of Queensland, Australia to Brisbane, I watched the latest episode of a famous sci-fi franchise about a starship called Discovery on my tablet.

While the special effects were impressive and the characters compelling, I could barely concentrate. Even the highest production values in the world could not compete with the island getaway I myself had just been lucky enough to discover. My head was simply full to bursting with Hamilton Island. 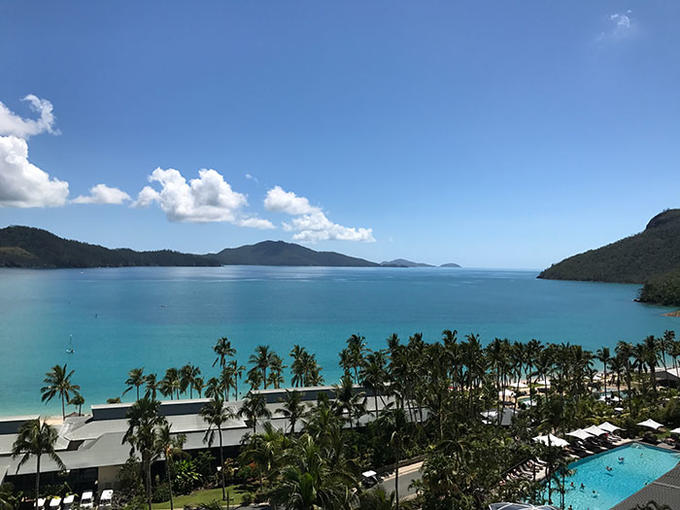 Part of the Whitsunday Islands and located pretty much smack-bang in the middle of the Great Barrier Reef, it’s the perfect jumping off point for seeing this truly awesome natural wonder up close and, as I would find out, from the air. Also nearby – 30 minutes by fast catamaran, in fact – you’ll find Whitehaven Beach, regularly voted one of the top beaches in the world and comfortably sitting in the number one spot as Australia’s firm favourite.

But this would be to overlook the charms of Hamilton Island itself. The whole island is an exceedingly civilised, outstandingly pretty playground and it’s impossible not to succumb to the relaxed way of life here. Pick up your bags, turn the key in your rental buggy – one of the best ways to get around the island, although there are free shuttle buses – and within 10 minutes of arriving at the airport you could be swimming at the beach. Literally. 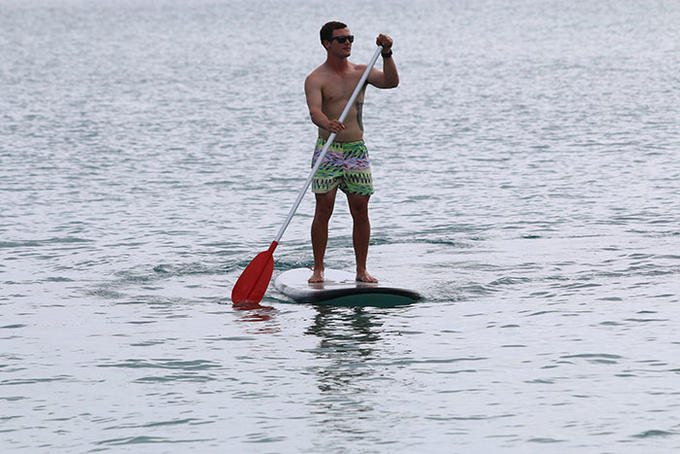 Anyone staying in a Hamilton Island owned property can pick from an array of complimentary non-motorised water sports on Catseye Beach. Grab some snorkels and seek out the turtles that have sensibly made the island their home. Try your hand at kayaking or stand-up paddleboarding – there are helpful beach attendants to ensure you’ll be upright in no time. If you already have your sea legs, the catamarans are also free, while lessons are available for a small fee if you fancy getting under sail for the first time. Meanwhile, the swim-up bar at the Main Pool, one of four across the island, offers a far less physically demanding way to spend time in the water.

Out and out landlubbers will appreciate the wealth of walking trails through pristine bushland – over 70% of the island is largely untouched. It makes a wonderful contrast to the beautifully manicured areas of the resort that are home to the wide range of accommodation and restaurant options the island offers.

So, in search of this nature, although possibly against my better judgement, the morning after we arrived we set off to take on Passage Peak – quite some time before my normal breakfast hour and even before the resident cockatoos had warmed up their vocal chords. This walk is a little bit challenging, but after only about 30 minutes – including a little rest before taking on the final few steeper steps – we reached the top, surprising a pair of wallabies on arrival before they bounced out of sight with enviable ease. 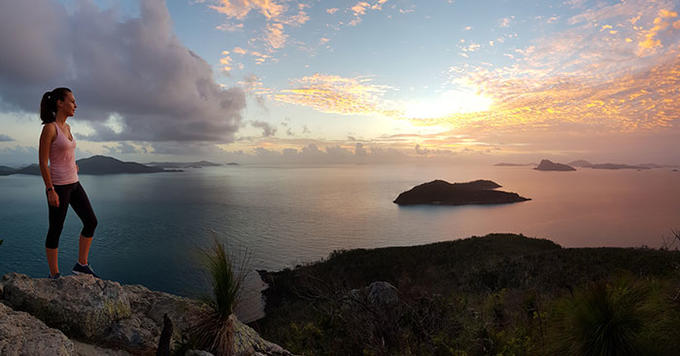 We had plenty of time to take in 360-degree views of the island and the rest of the Whitsundays in the first light of day before what became a spectacular sunrise. Small, wispy clouds marched slowly in tight formation across the sky, their uniforms turning from grey to orange to red to orange to white, while the water, stretching out towards near neighbours Perseverance and Dungurra Islands, momentarily became dusty pink. I looked across at my fellow walkers, still slightly jubilant from the ascent and bathed in the warm, colourful light. I myself, not quite recovered from the walk, was simply drenched. Still I have to accept my initial reservations were misguided. This is the perfect way to start the day.

On the way back down from the peak our guide Rheanna pointed out a green ant’s nest, ingeniously engineered from leaves in the tree branches hanging above us.

It suddenly occurred to me that, even with a few trips to Australia already under my belt, this was my first bush tucker trial. Sensing it would be churlish not to, I grasped an ant and tried to bite off its abdomen. Unfortunately, I failed and must try again. While my second attempt was more successful and I tasted something a little bit zesty, I was immediately thankful that my evening meal the night before offered far more to write home about. 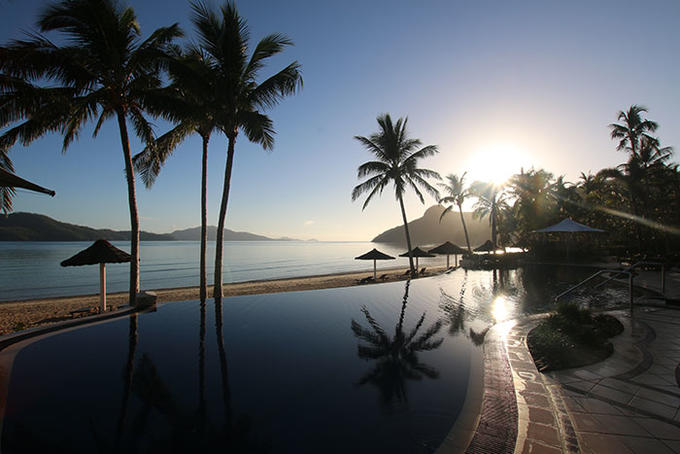 Before you arrive on Hamilton Island, I urge you to ask one of our Travel Butlers to secure a dinner reservation at the Beach Club’s restaurant. Request a table like ours, sitting within inches of the blue glow of the infinity pool overlooking the beach. In between the occasional cloud, the moonlight framed the surrounding palm trees and danced on the gently cresting waves. Modern Australian dishes including scallop ceviche and Flinders Island ‘Salt Grass’ lamb rack matched the delightful ambience. The linguine with local fish included Moreton Bay bugs, which sounded alarming but turned out to be far more delicious than green ants and actually something akin to a small local lobster. 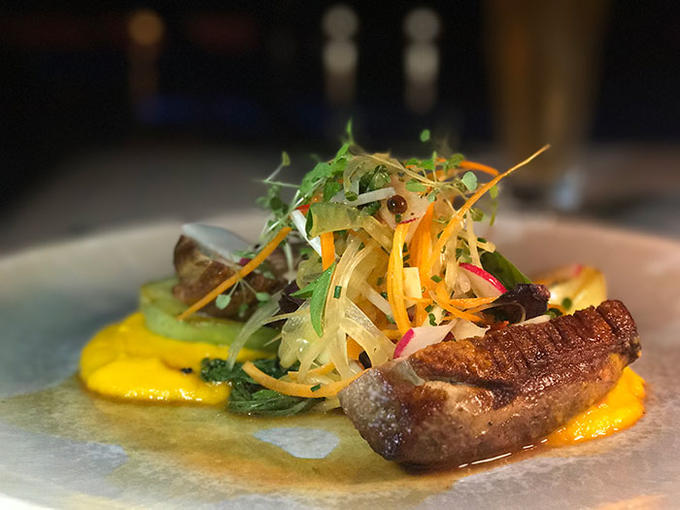 But enough reminiscing. Next on the agenda for day two was a golfing lesson. Hamilton Island’s golf course is technically on Dent Island, making it the only 18-hole golf course in Australia on its own separate island. The 10-minute ferry ride is the perfect way to reach this sublime slice of the world, but for anyone who might be really desperate for a game, the club has its own landing pad, so it’s possible to actually catch a helicopter here directly from the airport as soon as you get off your flight from the mainland.

Paul, one of the club’s professionals, got us started with a lesson. In the buggy to the first hole, he explained how the course – designed by five-time British Open winner, Peter Thomson – is challenging even for the most competent of players yet welcoming to everyone no matter how, er, green. Undulating hills slope in every direction and some holes border on a straight drop to the water below.

“Yeah, you’re gonna lose a few balls,” Paul warned us with a smile. 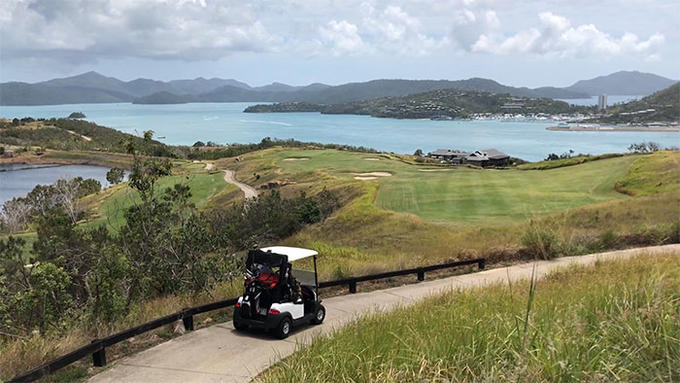 Remarkably, he had a depth of patience that matched my lack of skill and, having broken down the elements of the perfect stroke without condescension, half way around the course he even managed to prise a half decent swing out of me. Or so I thought. Having made solid contact, I watched with somewhat surprised glee as the ball sailed through the air for what seemed like an eternity before landing. On the wrong fairway. Well, Paul did say it was challenging and while it may not have been my finest sporting hour, with unrivalled views across the Coral Sea, it’s certainly a fine way to spend a few hours. Play here between July and September and you might be lucky enough to see whales breaching below between holes.

We retired to the Clubhouse for a swift half. Open to the pleasant elements on all sides, the views from here rival those enjoyed across the course, so consider heading across to Dent Island for a delicious lunch even if you don’t fancy 18 holes. You’ll still need to wear a collared shirt and enclosed shoes, however.

As the Clubhouse is not open for evening meals, we headed back to the main island in time to enjoy sunset from One Tree Hill, another elevated part of the island that’s easily accessible by road. A double rainbow appeared following a short, refreshing shower and, as we sipped cocktails, a flock of cockatoos filled the branches of a nearby palm tree. Come at the weekend and a live band competes with the birdsong. We were there midweek, but there were enough clouds colouring the sky to ensure the sunset was too distracting to notice the lack of a backing track.

Of course, the sun rises and sets every day, wherever you are. But what makes holidays special is being able to take the time to appreciate the brilliance of everyday events like this. And few places afford a better showcase from dawn to dusk than Hamilton Island.

Check out our range of Queensland holiday ideas, and chat to one of our Travel Experts about tailor making your Hamilton Island adventure.