A Guide to Flying in First with British Airways

‘Life is sweet’ when you’re heading to London in seat 1A...

When flying from Singapore in First with British Airways, the premium service starts with a secret four-character code. Revealed on a card handed to you as you enter the airline’s business lounge, it gives you access to The Bar Singapore. Once punched into the keypad, a solid black door opens automatically, closing silently behind you so as not to disturb the calm that pervades this hidden enclave – an exclusive haven in one of the busiest airports in the world.

A humidifier silently puffs away ensuring the air quality is just so. The lounge is decorated with elegant black and white canvases - a single, broad, undulating brushstroke on each one, reminiscent of Asian calligraphy - to match the leather furnishings. Two pairs of widescreen TVs arranged in both landscape and portrait, stream a live feed of Singapore’s Gardens by the Bay and the Marina Bay Sands resort, plus the skyline that frames the city’s famous Merlion mascot.

You can expect seats that engulf you (although not as much as the on board seat, I will discover), Champagne on tap and full waiter service at dining booths offering an à la carte menu rather than the buffet next door. I opt for a light, toasted chicken sandwich, to allow me to savour the fare available during the flight. 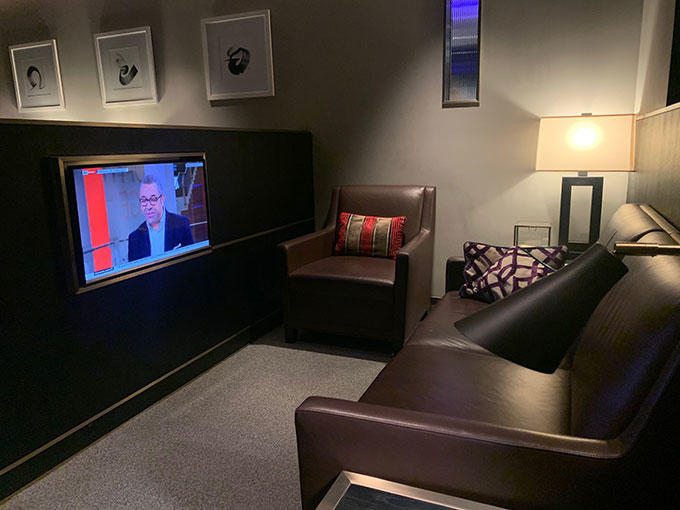 In no time we’re ready for boarding and I happily swap one delightful sanctuary for another. Passing through the gate with a sizeable group of people, once I turn on to the final bridge leading to Door A, I’m suddenly by myself. While the A380 we’ll be flying on today has capacity for 469 passengers in four classes, this entry is reserved just for the 14 passengers seated in rows one to four. If you’ve ever looked forward to “turning left” while everyone else turns right, this immediately feels even more VIP, quite frankly.

As I wave my boarding pass, I’m greeted by name: “Mr Murray! Welcome aboard. You’re just around the corner, first row.”

And as I settle into seat 1A – far and away the most premium sounding seat number there is – Fahan, the cabin services director also stops by to say hello. “Let us know if there’s anything at all you need,” he tells me. He’s swiftly followed by his delightful Irish colleague, Ailsa, who more than anyone else, will take exceptional care of us during the flight. First up, she delivers a hot towel on a tiny dish - perfectly solving the usual problem of where to put it after freshening up.

“Some Champagne for you,” she suggests. This is quickly followed by a polite guess: “And medium pyjamas?” As optimistic as that is, I opt for a large pair, in stylish black cotton and satin designed by Temperley London. Well, it’s been an indulgent holiday - although that doesn’t stop me from having another glass of bubbles. On today’s flight it’s Laurent-Perrier Grand Siècle, served in Dartington Crystal stemware. 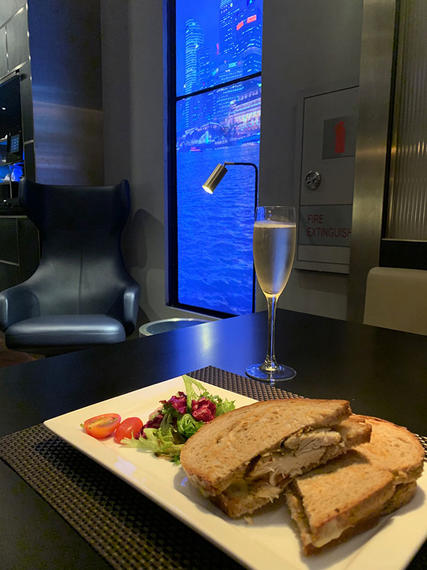 Expect full waiter service and an A La Carte menu 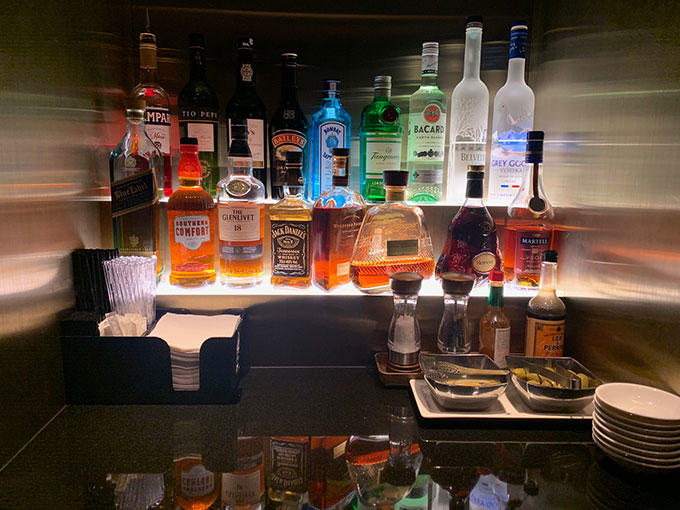 Choose from a selection of top shelf spirits

Situated slightly further forward in the cabin, seat 1A is entirely private. Instead of neighbours, a bulkhead housing the stairs to the upper level separates this seat and 1K, the only other seat in row one, which is all the way across the cabin at the opposite window.

Even in the seats behind me, a short divide wraps around the aisle side of the seat and extends forward enough to ensure no one has a view of nearby passengers, unless they try. Should you be seated in the middle section of the cabin and not know your neighbour, you can raise an elegant, pleated blind between seats for additional privacy.

The seat is so spacious, when sat back it’s impossible to reach the two oversized windows next to me.  I’ve never been able to put my feet up while still on the runway before, but thanks to the upholstered padding leading to the footrest, I am all set for my most laid back take off ever. Seat 1a turns into a fully flat bed

The seat’s ottoman comes equipped with a seat belt, converting into a guest seat to allow dinner for two at the oversized table that folds out from a side pedestal. This also houses the seat and lighting controls. In place of a pointy torch, there’s a personal lamp. Yes, a lamp, complete with shade – made of glass rather than sass, to be clear.

A padded storage compartment houses the control for the enormous entertainment screen, with plenty of room to spare for your wallet, phone, book or tablet. And there’s a wardrobe that offers more easily accessible storage than your dedicated overhead bin and keeps clothes crease-free when you change into your PJs. 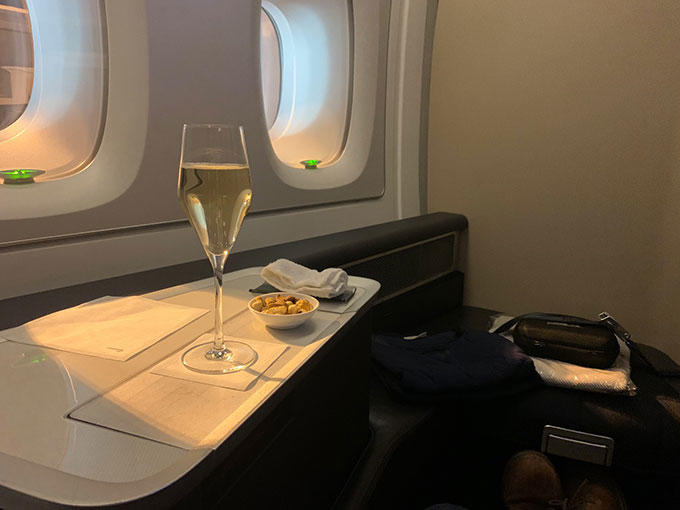 Put your feet up and enjoy a pre-flight glass of Champagne - Image: Phil Murray

When the seat belt sign goes off, Ailsa is back to ask when I would like to dine. I’m keen to get some rest – the cabin lights have already been dimmed and some guests have donned their eye masks for sleep within seconds – so ask to eat as soon as possible.

Well, while BA serves BrewDog Speedbird 100 IPA in all its cabins and lounges in celebration of its 100th anniversary, the brewery’s Air Craft ale is only served in First. Which means it’s a must try! It comes in a curvaceous, cut-glass tumbler, along with three delicious canapés. Less citrusy than Speedbird, it goes down extremely swiftly – in my defence the glass does not hold the full bottle – so I opt for a second. 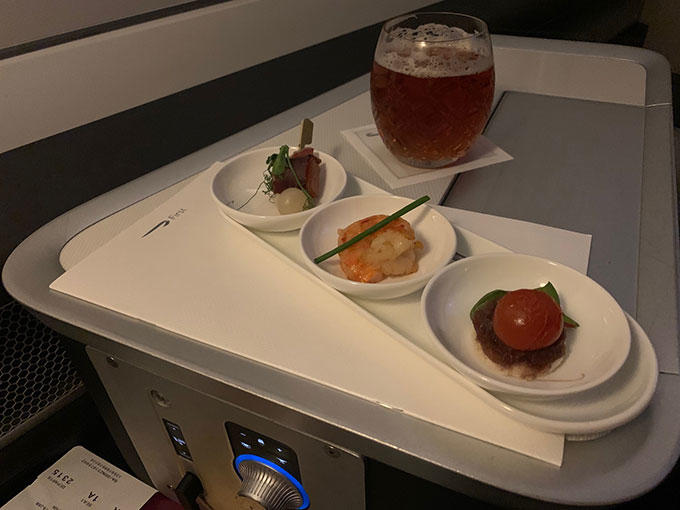 As I start to watch a movie – becoming embarrassingly emotional over Brit flick Fisherman’s Friend – the noise-cancelling headphones are so effective, I miss the first half of everything Ailsa says to me…

“At least they’re doing their job,” she chuckles, while setting the table with a cotton table cloth and full-sized Williams Studio cutlery. Dishes are served on William Edwards Fine Bone China, which can also be found at some of the world’s most discerning restaurants and hotels, including Claridge’s and The Connaught.

When it comes to the extensive menu, everything sounds delicious. To start, I opt for smoked breast of duck, over the other choices of salmon mousse, cheddar and mushroom quiche, parsnip soup or seasonal salad. For main, I’m torn between the grilled tenderloin of Australian beef and the Za’atar spiced seabass, with roast chicken and conchiglie pasta also available. I’m more than happy with my choice of seabass, served with Anna potatoes, buttered broccoli and sautéed red cabbage.

Not long into the flight, after several return visits, I realise that Ailsa reminds me of a far more sophisticated version of the housekeeper from Father Ted. And not simply based on her dulcet tones. Having switched to white wine during dinner, she reappears often, repeatedly plying me with more despite my glass still being pretty full. While she doesn’t actually use the phrase “ah, go on, go on, go on”, her intention is very much the same!

After some vanilla ice cream with chocolate sauce, almond shards, and strawberry compote, I ask for a hot whiskey to help me sleep. “And some honey with it,” Ailsa cleverly advises. This is more akin to the service you might expect from a personal butler. While I brush my teeth after dinner, my seat is turned into a wide, 198cm (6ft 6in) fully flat bed and fully made up with 400 thread count bedding, accompanied by a foam mattress topper. For day use, the seat also comes equipped with a blanket in cream herringbone and burgundy trim, plus a matching cushion, in case the full-size pillow isn’t quite supportive enough. 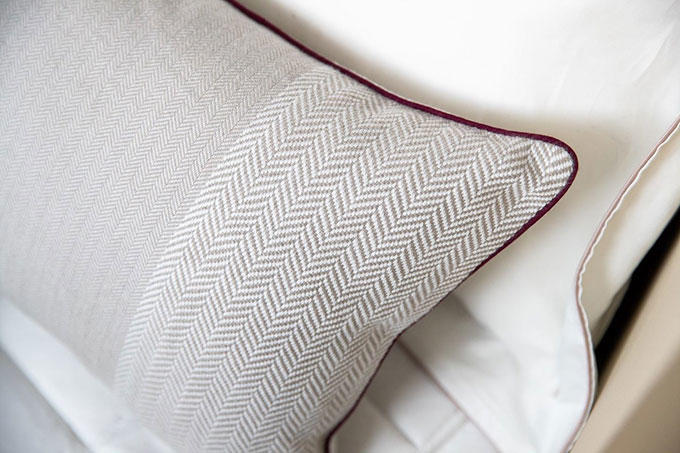 Meanwhile, back in the loo, I discover so many products in the wash bag that even when sharing the facilities with just seven other passengers (there’s a WC on each side of the First cabin, appointed with fresh flowers and individual cotton hand towels), I fear someone is bound to come knocking on the door, should I attempt to embrace the whole Elemis skin regime. 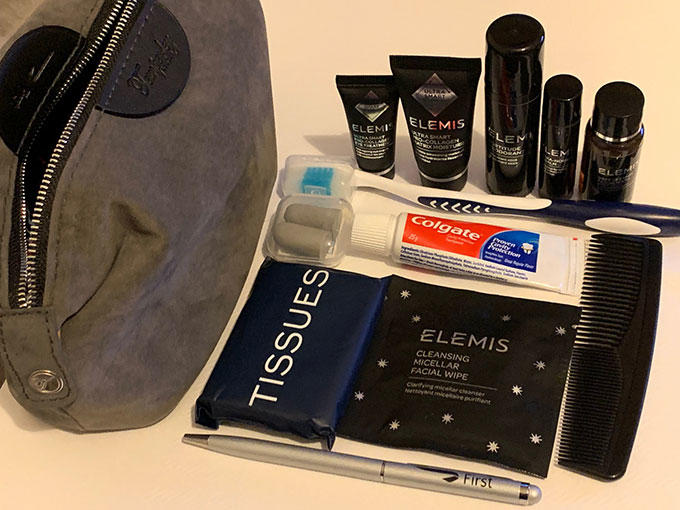 I limit myself to the deep cleanse facial wash and - let me get this right - the ultra-smart pro-collagen matrix moisturiser. I do use the lip balm through the night plus the deodorant stick and eye treatment the next morning. After seven hours of deep sleep, I feel well rested, but still in need of all the help I can get when it comes to my post-flatbed appearance. 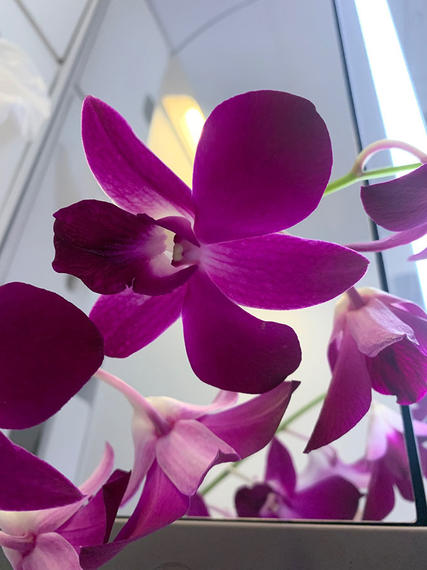 During breakfast, while enjoying a croissant, served hot before a full English breakfast, I happen to glance at the writing inside the lid of the marmalade, provided of course by England’s Wilkin & Sons of Tiptree.

Somewhat fittingly it reads ‘Life is sweet’. After 12 hours in seat 1A, I couldn’t agree more.

World
A Guide to Flying Upper Class with Virgin Atlantic
I was recently fortunate enough to be invited aboard a celebratory flight with Virgin Atlantic from London to New York, as part of the launch of the latest addition to... Read More »
A Guide to Flying Business Class with Cathay Pacific
When you’re sipping Champagne in slippers and eating smoked salmon and scallops to start, you know this isn’t an ordinary flight. It turns out, in Cathay Pacific... Read More »
New Zealand
A Guide to Flying Premium Economy with Air New Zealand
I recently had the pleasure of flying from Auckland to San Francisco with Air New Zealand, seated in 25B, midway down their delightful Premium Economy cabin. And I can... Read More »
Call:
0208 127 4273 0333 333 2211
Talk to a Travel Expert
Instant call back »We'll call you back for free
X