Where to start with this review of the Cathay Pacific Lounge at Hong Kong International Airport? Well first of all, we’re talking lounges.

Four to be precise, with premium passengers transiting through its hub able to escape the hustle and bustle by visiting The Bridge, The Pier, The Wing and The Deck.

On our return journey connecting here, we experienced three of them (The Deck will have to wait for next time!) starting with The Bridge – it being the closest to our arrival gate. 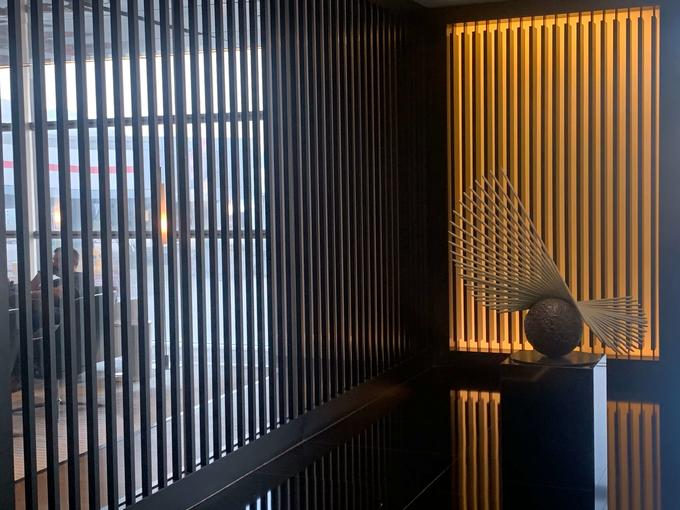 Modern lines and decorative sculpture welcome you to The Bridge Lounge 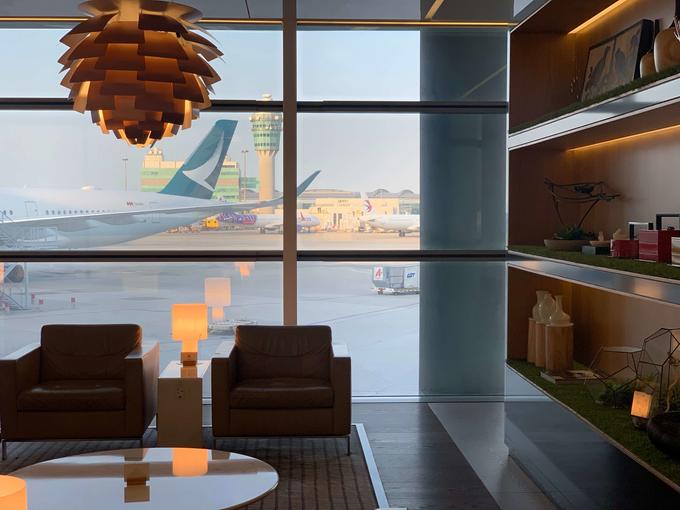 After an 11-hour flight in Cathay Pacific’s deeply comfortable Business Class, we were perfectly rested but still in need of a shower. So we headed directly to the desk to add our names to the wait list.

A very reasonable 15-minute wait time – there was actually zero wait time on our return leg– allowed us to explore both wings of this extensive lounge. We eventually opted for some delicious steamed dumplings from the Bakery, which it will come as no surprise also serves a wide selection of freshly baked bread and a plentiful buffet – think tapas, cheese board, salads, a fish platter, along with breakfast items early in the morning. 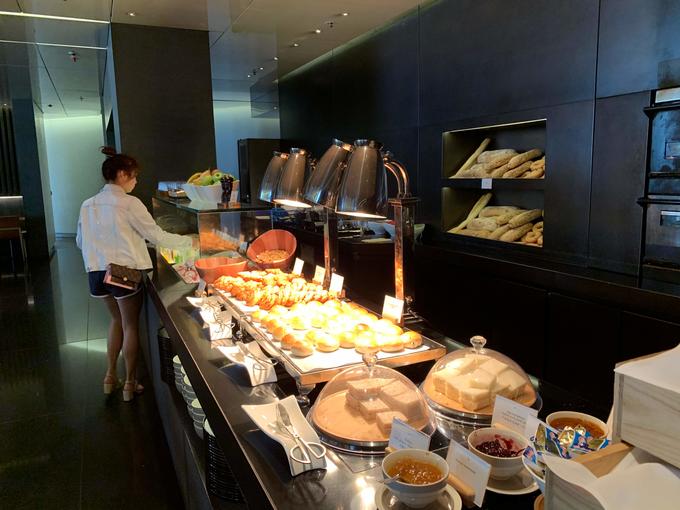 One of the many buffets in The Bridge Lounge - (Image: Phil Murray)

One of the many buffets in The Bridge Lounge 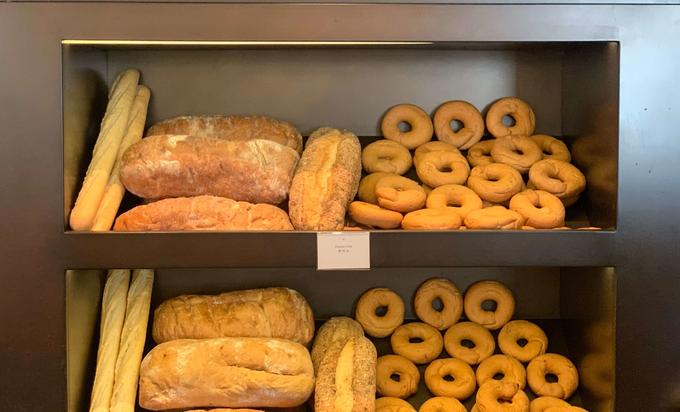 A selection of fresh bread and bagels from the Bakery - (Image: Phil Murray)

A selection of fresh bread and bagels from the Bakery

There was also just enough time for a glass of Champagne from The Long Bar with a wonderful view of Cathay Pacific’s fleet, before our buzzers turned red. 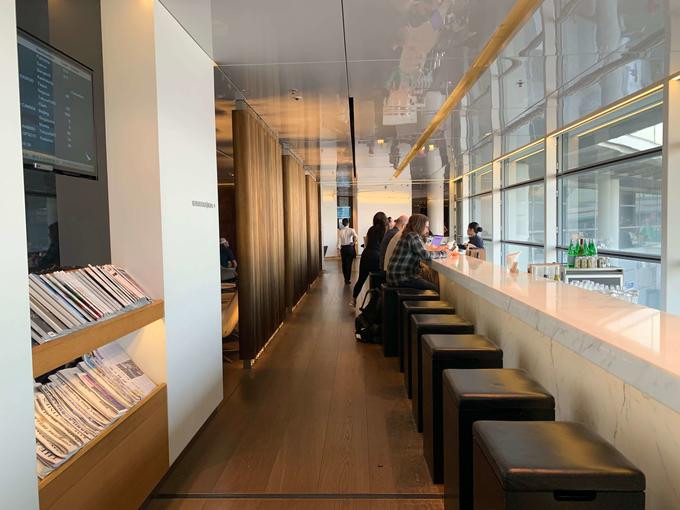 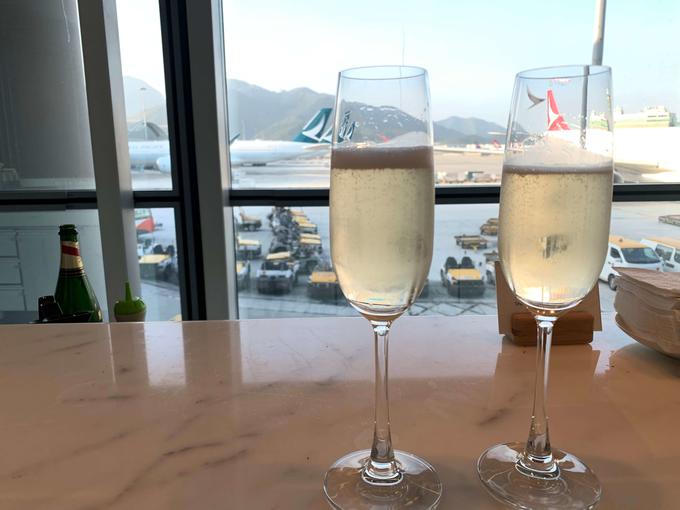 A view of Cathay Pacific's fleet from the Long Bar - (Image: Phil Murray)

A view of Cathay Pacific's fleet from the Long Bar

Truly, there are few things more welcome after a long flight than a shower, especially during a stopover. So I felt enormously grateful as I was politely ushered into the washroom, impeccably clean and replenished with fresh towels and Jurlique toiletries. The walk-in, rain-effect shower I stepped into was fully indulgent indeed, and after just a few short minutes I already felt completely rejuvenated and ready for the next flight. 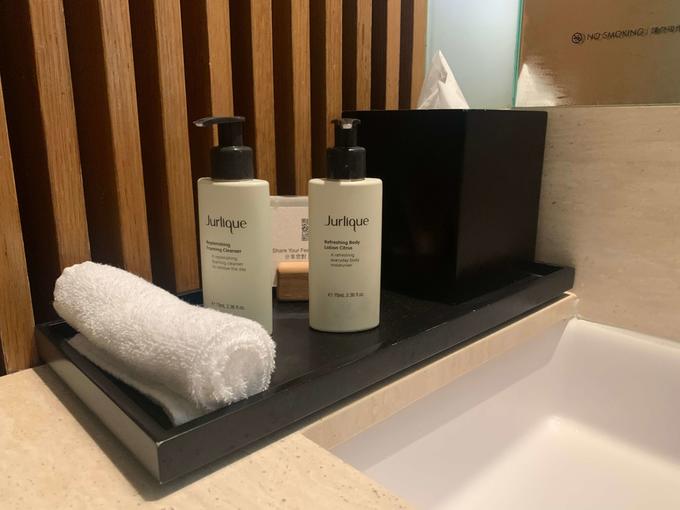 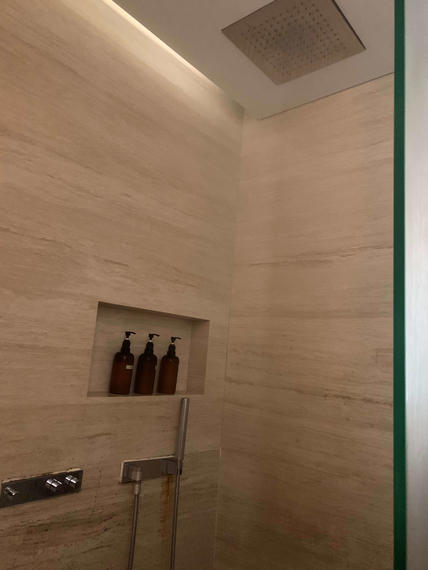 A very welcome and invigorating rain effect shower. Does a stopover get any better? - (Image: Phil Murray)

A very welcome and invigorating rain effect shower. Does a stopover get any better?

After asking one of the hosts whether our flight’s departure gate had been assigned yet, she revealed that it would actually be closer to The Pier lounge.

“You should go there now and try the fresh noodle bar!” she advised us with some enthusiasm.

We didn’t need telling twice, having already read a feature in the newspaper-style menu on our flight, which, explaining the significance of this culinary icon, declared: “If Hong Kong were represented by a single dish it would be wonton noodles!” 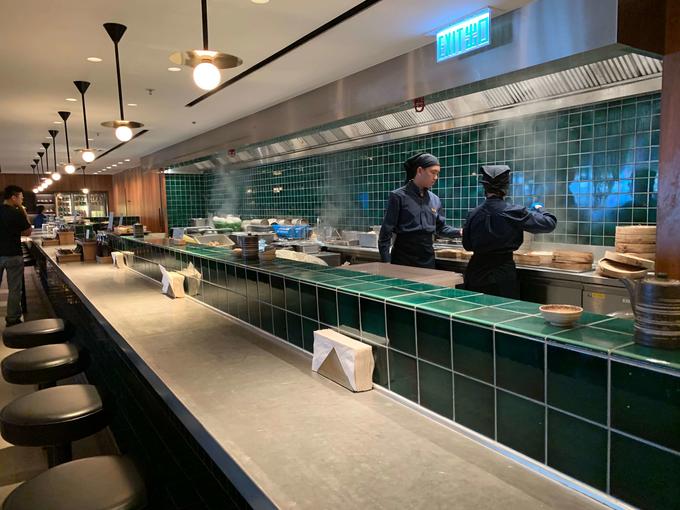 The fresh noodle bar at The Pier Lounge... 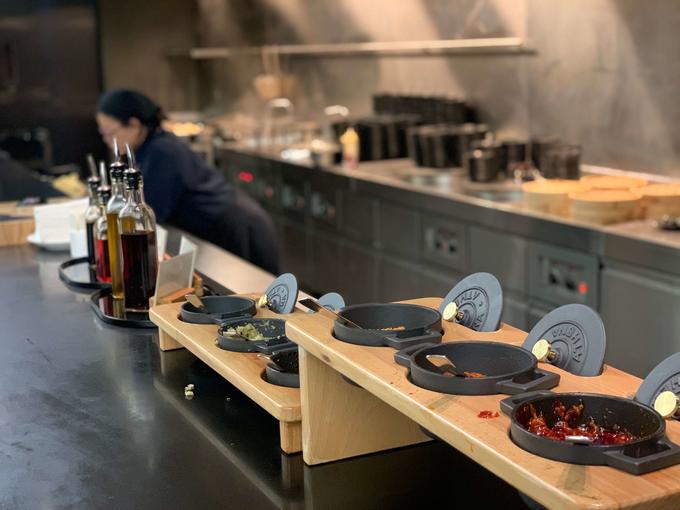 These dumplings are actually a signature dish in the airline’s lounges, where they are prepared fresh every day. And on making our way directly to the long noodle bar in what is the airline’s largest lounge, we did indeed find a chef ready to take our order, standing next to a bowl of prawns and minced pork waiting to be turned into incredibly fresh wontons!

I’m not sure why I was even handed another buzzer, because almost within seconds it blinked red and I was presented with a steaming dish of noodles, made with fresh duck egg, topped with said wontons. I added some chiu chow chilli sauce that turned out to have just the right amount of kick. 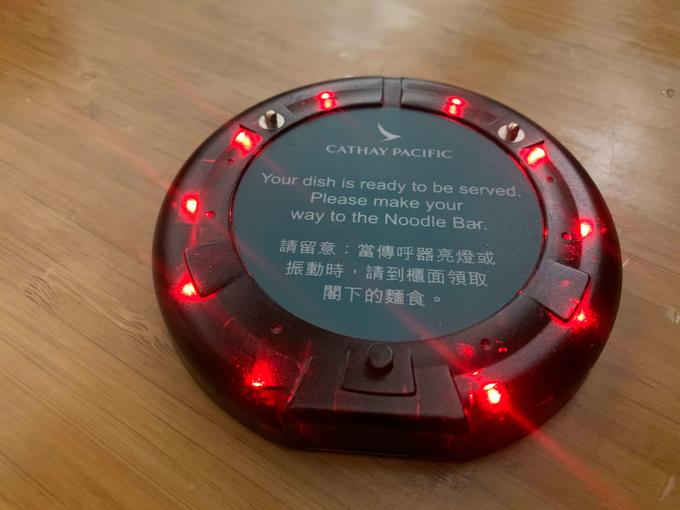 It took seconds to start blinking, but I could still hardly wait! - (Image: Phil Murray)

It took seconds to start blinking, but I could still hardly wait! 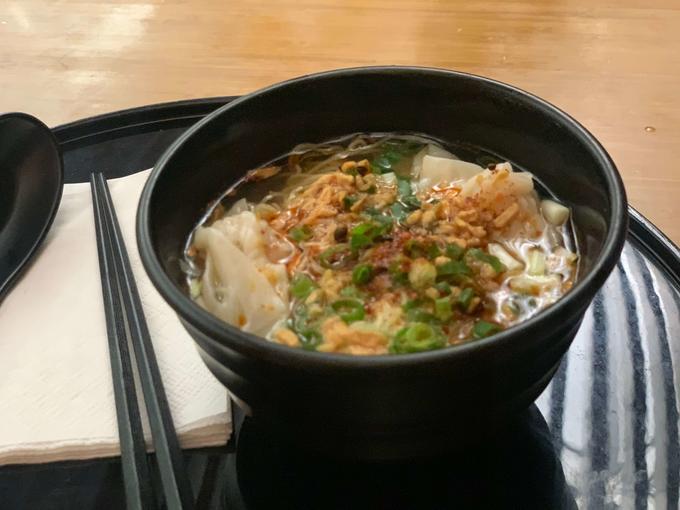 Hands down it has to be far and away the best thing I have ever eaten in an airport lounge! The broth – made from dried flounder simmered with monk fruit, dried shrimp, ginger, chicken and pork bones for over three hours! – is a warm embrace of umami flavourful goodness and the dumplings are simply delicious. I didn’t have time for a second bowl on my first visit, but put in a repeat order during the layover on the return flight – along with a steamed pork bun. 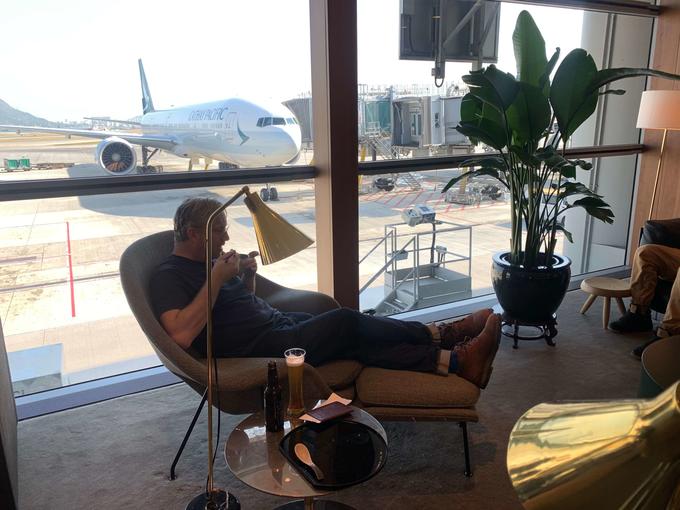 To drink, I turned to Betsy. Named after Cathay Pacific’s first ever aircraft – the classic Douglas DC3 – Betsy is the airline’s handcrafted pale ale. While it’s specially brewed to taste great in the air, after some fairly rigorous testing, I can confirm it also tastes pretty good on the ground! 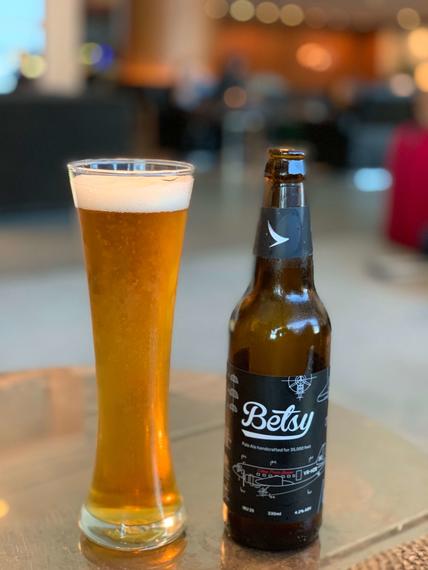 'Betsy' craft ale brewed to taste good in the air; pretty great on the ground

'Betsy' craft ale brewed to taste good in the air; pretty great on the ground

If you prefer something lighter, the Pier lounge is also home to a beautifully designed teahouse serving a selection of seasonal and artisanal green, black and white teas, with a specialist on hand to guide your individual choice. 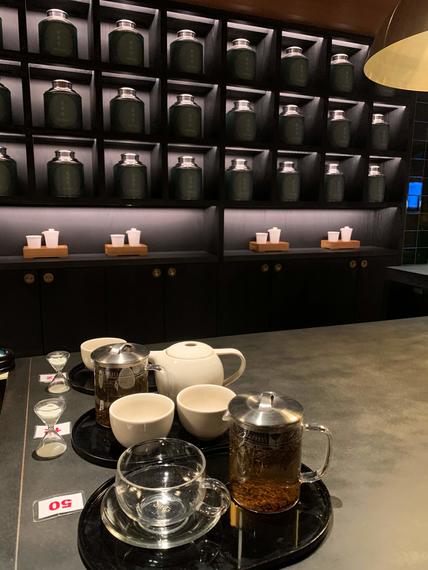 The Teahouse at The Pier Lounge - (Image: Phil Murray)

The Teahouse at The Pier Lounge

It typifies the blend of modern and traditional design elements that characterise the Cathay Pacific lounges. In each lounge, there is a vast array of seating to suit every mood and a clever use of plants all adding to the sense of calm. 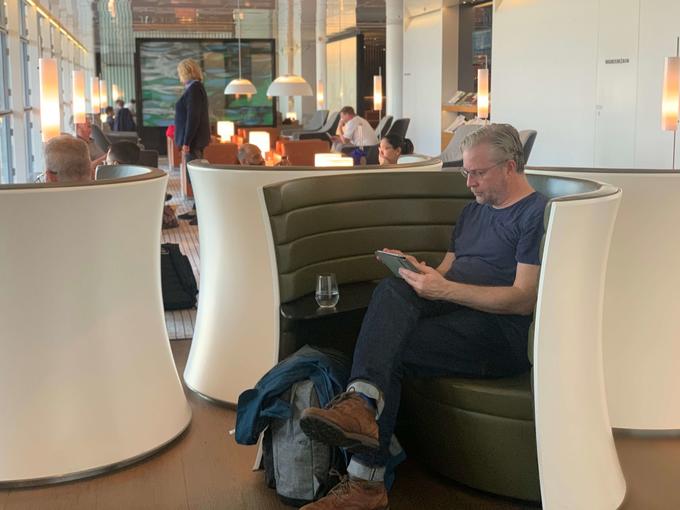 A choice of seating to suit every mood - (Image: Phil Murray

A choice of seating to suit every mood 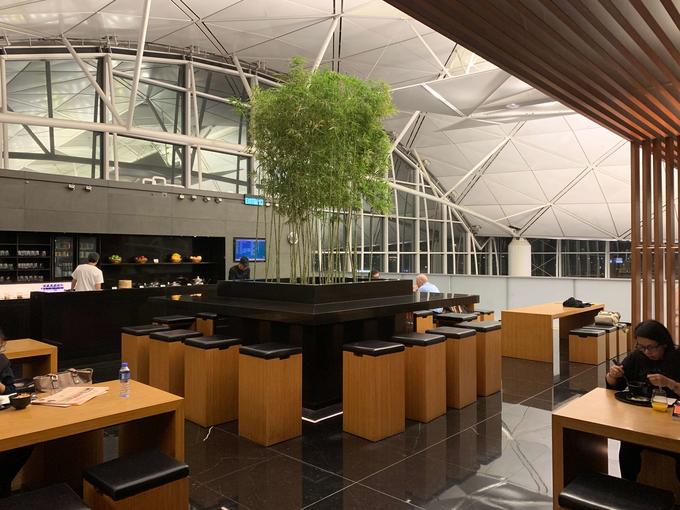 Cathay Lounges are characterised by attractive planting throughout

On our return leg, we sat on stools beneath a pretty cluster of bamboo in The Wing’s noodle bar.

And, for added relaxation, you can spend time in The Pier’s yoga sanctuary, where you can stretch at your own pace or follow an introductory video class.

If only I hadn’t been too busy doing nothing and eating those wontons!

A Guide to Flying Business Class with Cathay Pacific
When you’re sipping Champagne in slippers and eating smoked salmon and scallops to start, you know this isn’t an ordinary flight. It turns out, in Cathay Pacific... Read More »
Asia
The Hong Kong Stopover Guide
A harbour city known for its densely packed streets and soaring skyline, Hong Kong offers an abundance of significant landmarks and exciting experiences in the shadow of... Read More »
Call:
0208 127 4273 0333 333 2211
Talk to a Travel Expert
Instant call back »We'll call you back for free
X