What it’s Like to Fly Business Class with Garuda Indonesia

Anyone who knows me will vouch for the fact that I’m not the best at flying. I’m always one of the first to arrive for a flight, anxious to drop my bag off and get through security, and then you’ll usually find me at the gate, waiting to board so that I can get the experience over and done with. My love of travel means I won’t stop boarding planes anytime soon, but I have to admit, I’m not much fun to fly with. So when I found myself recently feeling a little disappointed that a 15-hour flight to Bali was over, I knew it was a big moment. Here’s why flying Business Class with Garuda Indonesia is such a treat… 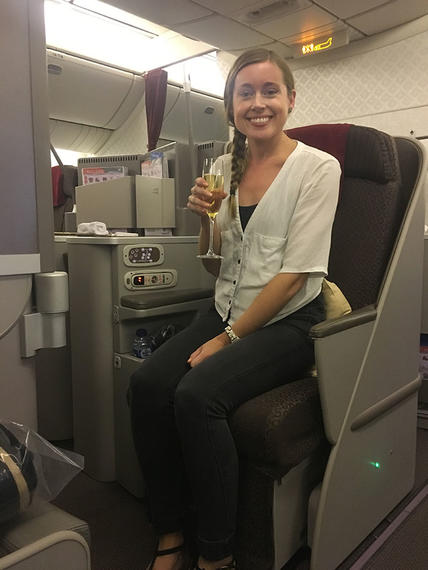 As soon as I stepped onboard, fresh from the priority boarding area, and clapped eyes on the plush leather seats, I instantly forgot about the long flight ahead of me. I made myself comfortable and checked out my surroundings; my seat went completely flat at the push of a button and I’d been fully equipped with a pillow, blankets and an amenity kit. A quick glance inside revealed an eye mask, socks, a dental kit, hairbrush, Clarins lip balm and moisturiser and – my personal favourite – slippers. Within minutes of settling down, I was offered a chilled glass of Champagne and handed a menu of all of the food I could look forward to during the flight. Before I knew it, we were taking off – something I usually spend a good 30 minutes fretting over once I’m on the plane. But not this time. Instead, I continued to peruse the menu, weighing up my delicious dinner choices. 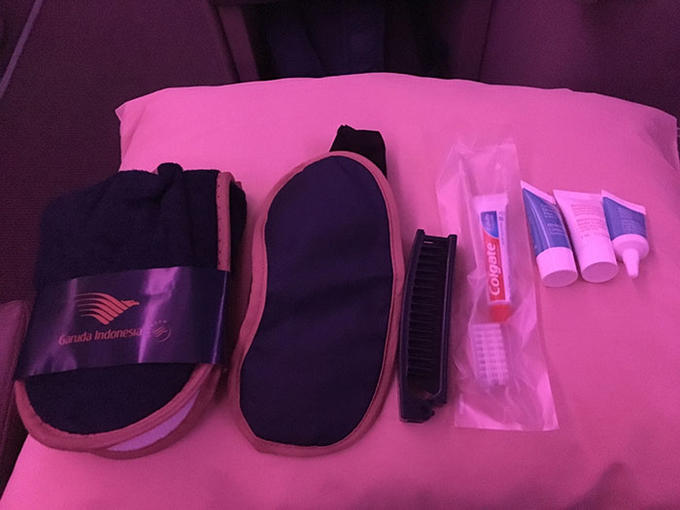 “Would you like some more Champagne, madam?” From this point on, I knew the air stewardess and I were going to be friends. The Garuda Indonesia crew were attentive, knowledgeable and extremely helpful throughout the flight – they pre-empted every request I had, cleared my drinks glass away without me even noticing, and talked me through that delicious menu. Speaking of which… Oh, the food. Being a major foodie, I’m one of those weird people who actually enjoys normal aeroplane food – so you can imagine how much I was in my element on this flight. After agonising over the menu, I opted for a tofu and long bean salad served with warm (warm!) rolls, followed by salmon fillet, with prawns, potatoes and vegetables. I had just enough room left for my strawberry cheesecake and the best red wine I’ve ever had on a flight, before it was time to bed down for the night. Lying flat on a moving plane was a novelty for me, and those seven hours of kip made for a new record – I usually barely sleep at all on night flights, eventually giving up and switching a film on. This time around, I was in such a deep sleep; I had to be woken up for breakfast! The previous evening, the attentive crew had taken my order, and I was served my breakfast starter (yes – there was a breakfast starter!) of cereal, fruit, and warm croissants with butter and jam, before the main event – scrambled egg with vegetarian sausages, hash browns and beans. While I was sipping my tea from a mug (a real mug – no plastic here), the chef came out to chat to passengers about whether they’d enjoyed the food. I’ve no idea how he managed to conjure up such culinary delights in what I can only imagine are some pretty challenging kitchen conditions; but what I do know is that I heaped so much praise on him, I definitely made him blush. 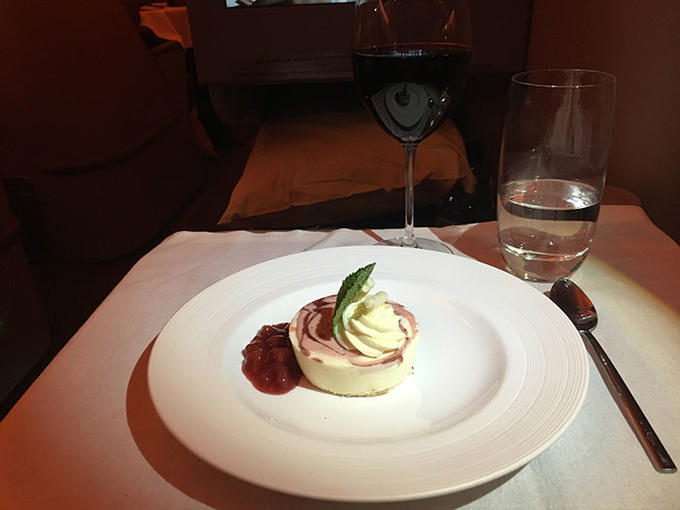 I’d never used noise-cancelling headphones on a flight before, and now I don’t think I’ll ever be able to use anything else. As soon as we took off, I settled down to watch one of my favourite films, The Greatest Showman (which I may have seen a few times before, but who’s counting?). In fact, the choice of films, television shows, documentaries and music onboard was so vast, I found myself wishing the flight was longer so that I could fit in everything I wanted to watch. The sound was so crisp and clear on the touch-screen televisions, I only noticed the air stewardess was attempting to offer me some snacks when she waved at me! I was even able to continue enjoying my film while we landed. As we touched down and taxied to the runway, I took a last sip of my morning latte, and reluctantly gathered my belongings. But my experience wasn’t over just yet – Business Class passengers were among the first to disembark the plane, and after zipping through immigration and collecting our priority-tagged luggage, we were soon out of the airport and ready for our Balinese adventure. And what a way to start it… 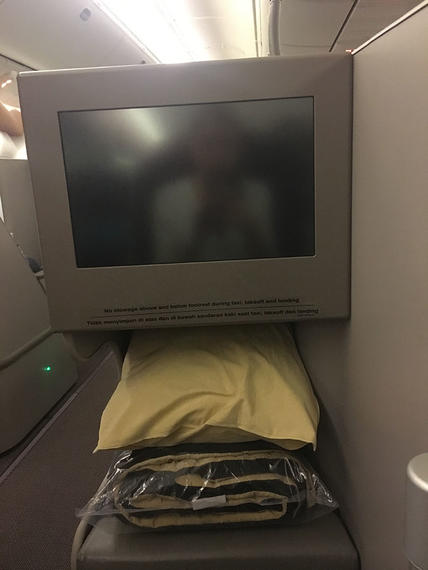 Chat to a Flight Centre Expert about flying to Bali with Garuda Indonesia.

Bali
The Best Hotels in Bali
Bali has been top of my travel wish-list for as long as I can remember – those rolling emerald hills, the white-sand beaches, the spectacular surfing; not to mention... Read More »
Asia
What it’s Like to Trek Through Bali’s Rice Paddy Fields
On my recent trip to Indonesia, I had three things I desperately wanted to tick off my travel wish list – spotting the Komodo dragons, tasting the delicious cuisine... Read More »
Call:
0208 127 4273 0333 333 2211
Talk to a Travel Expert
Instant call back »We'll call you back for free
X