Flight Centre Travel Blog/Christmas Dinners From Around the World

Christmas Dinners From Around the World

It’s Christmas time, the stockings are full, the Christmas trees are decorated and the smell of roasting Turkey and honey glazed vegetables is wafting through the house.

Or, at least that’s the scene across the United Kingdom, but what’s it like elsewhere in the world?

Instead of roasting turkeys and miserable weather, on the other side of the world, you’ll find summer sunshine and barbecues in Australia. In Japan, the strange tradition of eating KFC on Christmas day goes from strength to strength, while in Norway, it’s sheep’s head that’s been firmly on the menu for centuries. There are some delectable and some downright strange Christmas specialities, and to tantalise or perhaps revolt your taste buds, here are the most intriguing Christmas Dinners from around the world. 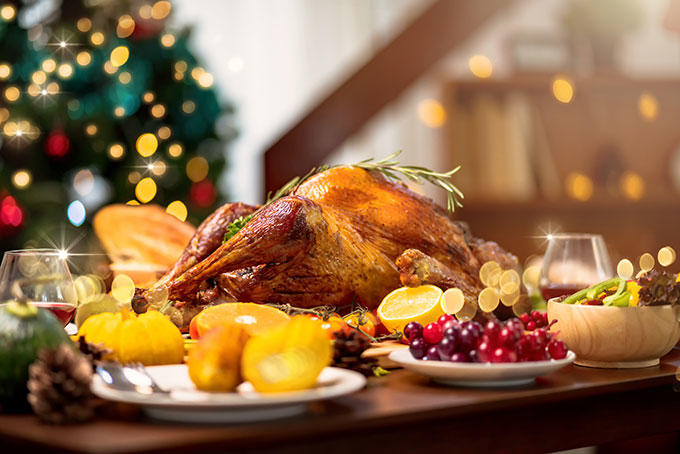 It’s scorching hot in Australia all through December, so rather than wrapping up warm and heating up lashings of gravy to cover the roasted turkey, it’s time to hit the beach and to fire up the Barbie.

This is the height of the Aussie summer, and unless you’re stuck far out in the Outback, Christmas Day is best spent cooling off in the ocean. Enjoy some ice-cold beers and get the meat and vegetables ready for a good grilling. You’ll find burgers, steaks and sausages are standard for an Aussie Xmas BBQ, and that no Christmas Dinner is complete without a hefty serving of prawns.

For dessert, the Aussie classic has long been Pavlova, covered in healthy portions of fresh fruit and less healthy servings of whipped cream. Over in the Far East, Japan has the unlikeliest of Christmas celebrations - especially given that the Asian nation is one of the least Christianised countries in the world.

But the Japanese have taken the best qualities of Christmas and none of the religious aspects, celebrating love and friendship over the festive period. This is a time for parties, and for sharing, and what better way to share than with a giant bucket of KFC?

Kentucky Fried Chicken led a marketing campaign in the 1970s that’s proven so successful that decades later KFC stores sell out for days all through December. If you’re in Japan for Christmas, make sure you order your bucket of fried chicken well in advance to avoid disappointment. 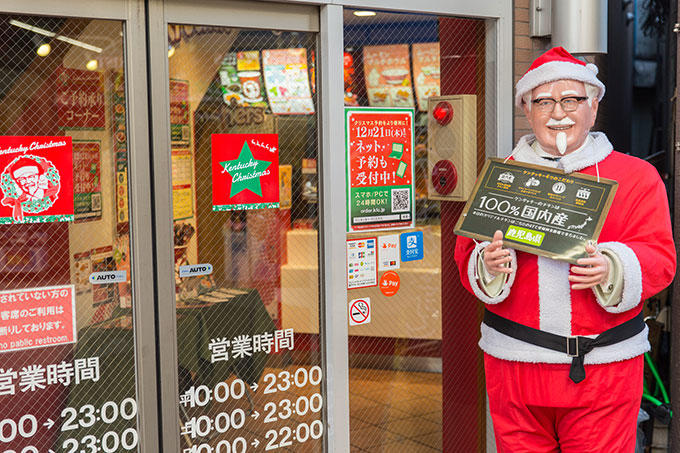 In Eastern Europe, dumplings have long been a staple food of the masses, and these delicious parcels of meat and veg wrapped in pastry, and then fried or boiled, come in all shapes and sizes across the region.

But no one takes their dumplings more seriously than the Polish, and the county’s national dish is the local variant, known as Pierogi. While ordinarily, you’ll find pierogi can be stuffed with meat, cheese, vegetables or a combination of all three, Christmas is actually a vegetarian affair in Poland. Christmas dinner is eaten on Christmas Eve, and top of the menu is Pierogi stuffed with a range of seasonal winter vegetables, ranging from cabbage to mushrooms. 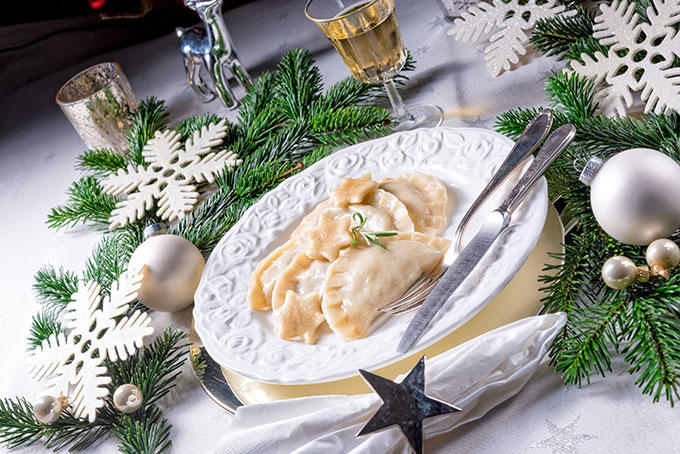 Times used to be a lot tougher in Norway, and centuries ago the poorer inhabitants of the country would never waste any part of an animal, including the head.

While the head of a sheep is today considered to be an extreme food, in some parts of Norway, traditionalists continue to boil it up - brains and all - and serve this unusual dish for Christmas dinner. Known as Smalahove, a sheep’s head isn’t the most appetising of Xmas dinners, especially when you consider that the boiled brains are often eaten with a spoon, but it endures in the hardier regions of western Norway to this day.

Norwegian Sheep’s Head is best served with mashed potatoes and a large shot of the local liquor, Akvavit, to cope with the ordeal! 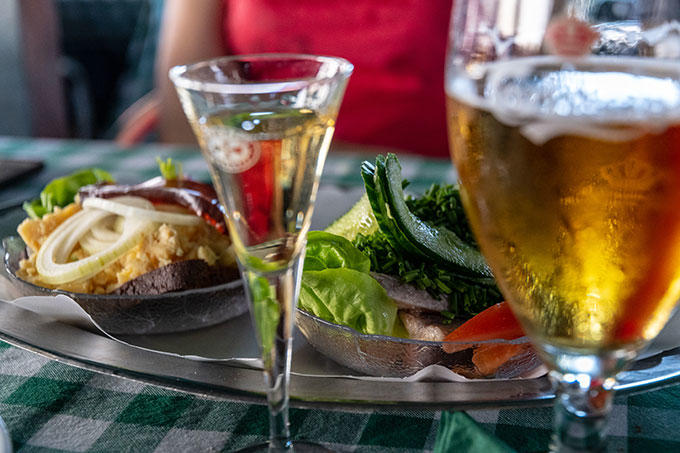 Fish and Chips is a meal that any British person will be more than familiar with, but in the United Kingdom, fish is rarely found on the Christmas dinner menu.

It’s a different story in Portugal though, where the fish hungry nation has refined the concept of fish and potatoes to a delectable form that takes pride of place at the head of the Christmas dinner. The Portuguese will prepare a salted codfish - Bacalhau - and will serve it up with a range of humble vegetables, including of course, a healthy smattering of potatoes. The rest of the world might associate pumpkins with Halloween, but in Armenia, pumpkins are one of the most traditional Christmas meals. Armenia just so happens to be the world’s oldest Christian nation too, so they must know what they are talking about when it comes to Christmas traditions.

Ghapama is a traditional Christmas dish, which involves stuffing a large pumpkin with rice and dried fruits before baking it in the oven. 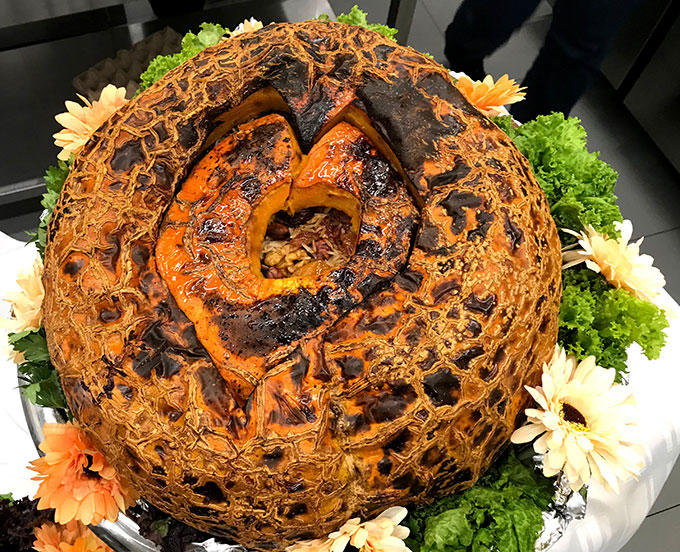 If there’s a Christmas dinner that’s most likely to deter the western palate, it’s the unusual dish of caterpillar worms that are eaten in some parts of South Africa.

The worm in question is actually the name for a type of caterpillar - confusing terminology indeed - the local name for which is Mopane. These caterpillar worms are specifically Emperor Moth caterpillars, but before they have the chance to bloom into beautiful butterflies they are fried and served up over the festive period as somewhat of a local delicacy. 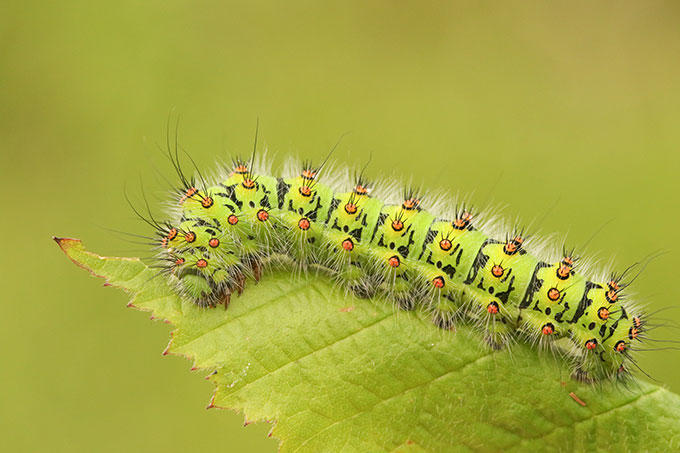 Over on the continent, German Christmas traditions are perhaps more relatable to the British, and across the country, huge meals are served up to celebrate the festive season.

The big Christmas meal actually happens on Christmas Eve, when all the family gathers to prepare a Christmas Goose and to eat and share presents. Importantly, the goose has to be stuffed, but the guidelines on what the goose can actually be stuffed with are refreshingly loose. You might find your German goose is stuffed with red cabbage or sauerkraut, or perhaps the inside is lined with an array of dumplings, or perhaps even other, smaller birds. World
5 of the Best Christmas Lights in the World
No matter where I am in the world, nothing makes me feel more festive than seeing a brightly-illuminated house, a fairylight switch-on, or a national icon decked in... Read More »
World
5 Family-Friendly Places to Spend Christmas
Christmas is a time we usually associate with staying at home. (How else will we catch the Gavin & Stacey Special?) But what if one year you wanted to shake things... Read More »
World
11 of the Most Magical Christmas Markets in the World
You know that festive feeling? The one where you crave nothing more than to be wrapped up in furs, a mug of hot chocolate in one gloved hand, and gift-laden shopping... Read More »
Call:
0800 587 0058 0333 333 2211
Talk to a Travel Expert
Instant call back »We'll call you back for free
X