A Guide to Cologne

Cologne, Germany’s fourth largest city, is located in the central western part of the country. After a brief visit as part of a German exchange (circa 2005), myself and the same group of school friends decided to take a trip back for a long weekend away. Whether you’re visiting for the first time or returning for a dose of nostalgia (like me), there’s always plenty to eat, drink and see. 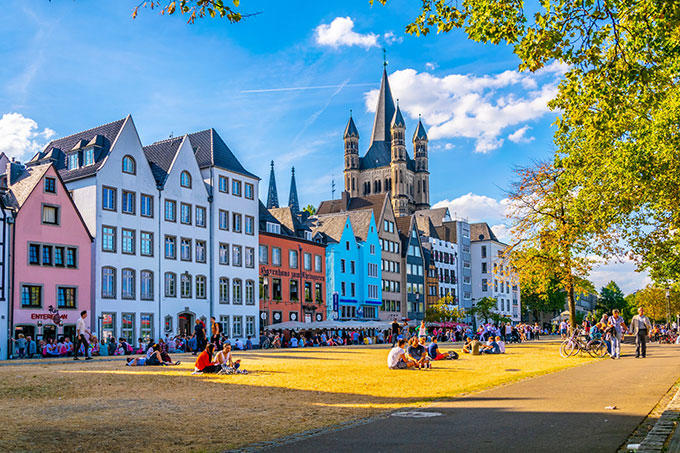 If the thought of German cuisine doesn’t conjure up images of sausages, schnitzel and Knödel (we’ll get to that later)… then I think you need to do some more research.

Of course, like any other European city, Cologne has a flurry of international restaurants, but I would recommend sticking to the local delicacies if you’re looking for the most authentic experience.

You’ll find this gem in the heart of Cologne’s vibrant Latin Quarter, known for its eclectic mix of bars and restaurants. Named after its long-time owner – who lived and worked to the age of 95 – this iconic restaurant serves up a menu of schnitzel (you can choose from either veal or pork), paired with a selection of homemade sauces.

Popular with locals as well as ‘in-the-know’ tourists, don’t be surprised to find this place fully booked - particularly during the weekend. If that is the case, speak to one of the waiters who will be more than happy to put your name down for a table. While you wait, either grab a spot by the bar (obviously they have a constant stream of Kölsch on tap) or head out to one of the nearby bars for a pre-dinner tipple.

Continuing on the more traditional side of things, you’ll find many Brauhäuser in and around Cologne’s city centre. Literally translated as ‘brewery’ these brewery-cum-restaurants are steeped in true Kölsch tradition, with many dating back to the early 19th century.

Now modernised, many have kept their original names (Brauhaus Sion and Früh for example) and most have ensured to keep the original rustic charm well intact. Dating back to 1544, Peters Brauhaus (previously named Zum Kranz) was originally one of the city’s leading breweries. After its original façade was destroyed (and later rebuilt) during World War II, Peters private brewery restored the three-storey townhouse back to its former glory (including a rather impressive wreath and chandelier).

Perfect for groups, you can take your pick of one of many long wooden tables where your server will soon be there to greet you with twelve Stangen (20-cL glasses of Kölsch), traditionally served in a circular tray resembling a crown or wreath.

Authentic German cooking is also central to the Brauhaus culture, with specialities of the house including schnitzel, pork knuckle and medallions of Venison served with Knödel (boiled potato dumplings that are typical of Bavarian of cuisine).

If you have enough room, the apple strudel is also not to be missed. 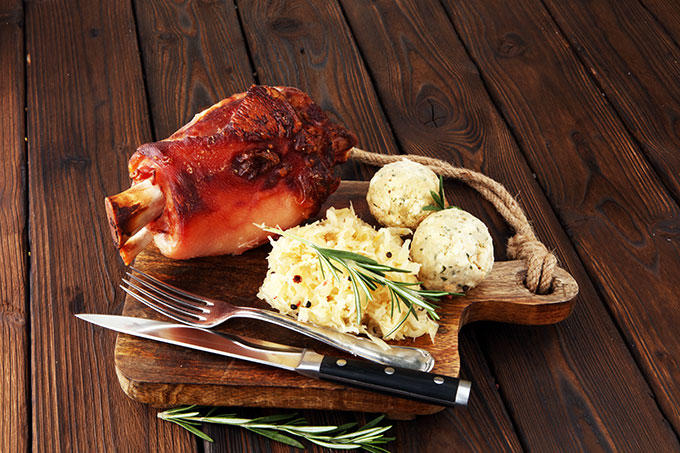 Situated on the 8th floor of the trendy 25hours Hotel in the Latin Quarter, Monkey Bar is the perfect place to spend an afternoon or an evening overlooking the city.

If you’re a cocktail fan then this is the place for you. Speak to one of the waiters dressed in Hawaiian shirts who will be more than happy to talk you through the extensive menu of international and safari-inspired cocktails. Contemporary twists on classic mixes including the Transatlantic Sour and the Gin Gin Mule are just a couple of options that are on offer.

If you’re less about the drinks and looking for some food, then sister restaurant Neni is situated on the other side of the floor. They also provide a selection of small-bites to Monkey Bar including falafel, Babaganoush and Korean fried chicken.

Take a seat at the bar or cosy around one of the futuristic fireplaces and enjoy the vibe. 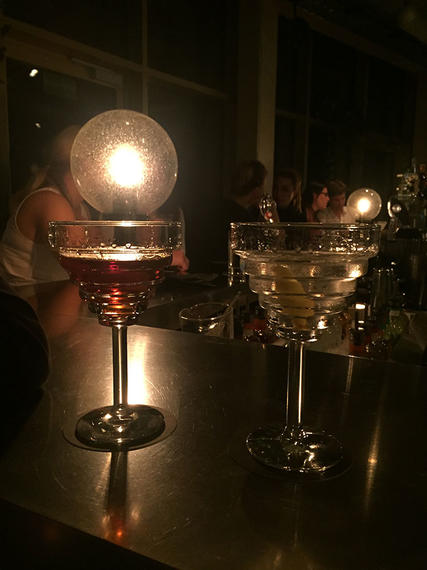 If you find yourself in a carbohydrate or meat-induced coma, then why not check out Cologne’s retail scene. You’ll find the main high-street along Schildergasse, but if you’re looking for something slightly off the beaten-track then I would recommend Humana Second Hand. Located just off Schildergasse on Hahnenstrasse, this second hand / vintage store is a treasure trove of men’s and women’s apparel, footwear and accessories.

At bargain prices (I bought a cashmere blend sweater for 26 EURO), you have to rummage but it’s totally worth it if you have the eye and the patience. 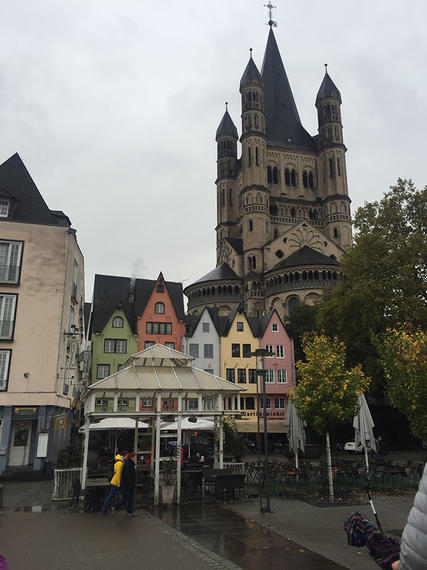 A trip to Cologne wouldn’t be complete without a trip to Cologne Cathedral. An unmissable (quite literally) example of gothic architecture, visitors can access the church and its basements free of charge or for a small donation. To fully appreciate the landmark, a trip up the spires is highly suggested for some of the most amazing views of the city.

Tickets are around 5 EURO and will give you access to the spiral staircase and the central bell tower. Not for the faint hearted, there are over five hundred steps to the top with only one support rail all the way up and all the way down.

Unless you’ve been living under a rock for the past few of years, you won’t be surprised to hear that the electric scooter craze has also hit Cologne. The absolutely PERFECT way to see the city, I’d recommend starting at Heumarkt and following the river front all the way down to the Rheinbrücke bridge. On your way back, cross over the Severinsbrücke to the Deutz neighbourhood to take in the cathedral and the Cologne skyline from across the Rhine.

Typically festive and central to German culture, Cologne has a variety of Christmas markets. The most popular is at the foot of the Cologne cathedral and brings in around 4 million people to its 150 stands every year.

If you’re looking for a slightly less busy option, the Alter Markt is located in Cologne’s old town (also known as Altstadt.

Whether you’re looking for traditional Glühwein or some hand-blown glass, this is the ideal festive activity on the run up to Christmas. Markets typically open on the Monday before Advent (December 1st) and close around the 23rd December. 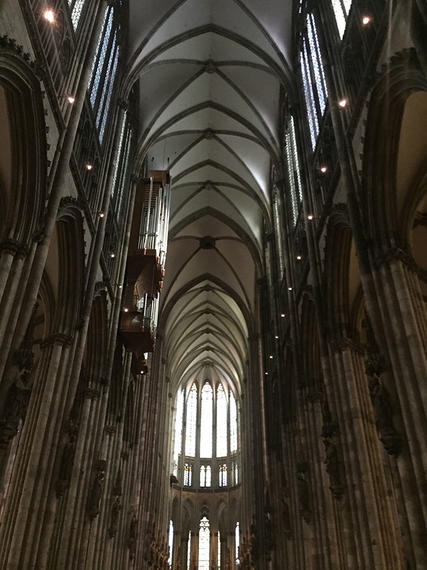 Faye Howard is an editor with a background in fashion trend forecasting and travel writing. Faye loves to unearth hidden gems on her travels and always makes sure she eats where the locals do.

Vienna
How To Spend A Weekend In Vienna
With Winter comes a total festive takeover. The desire to be cosy and snuggled up with a glass of mulled wine increases tenfold, and you long to be somewhere that... Read More »
Munich
A First-Timer's Guide to Munich
Daydreaming on the plane, I imagined every stereotypical scenario I could come across in the German city of Munich. Burly old men with eccentric moustaches clad in... Read More »
Europe
A Guide to Prague
The Czech capital city has long been associated with raucous stag and hen weekends. But there’s more to the charming city of Prague than budget boozy breaks; discover... Read More »
Call:
0208 127 4273 0333 333 2211
Talk to a Travel Expert
Instant call back »We'll call you back for free
X