A Beginner’s Guide to Angkor Wat

There’s no doubt that Angkor is one of travel’s great must dos. Sprawling across over 500 acres of lush jungle, ‘The Lost City’ attracts visitors far and wide. But there’s so much to know about this iconic destination beyond the eponymous Wat and the temple from Tomb Raider. Here’s how to get your bearings: 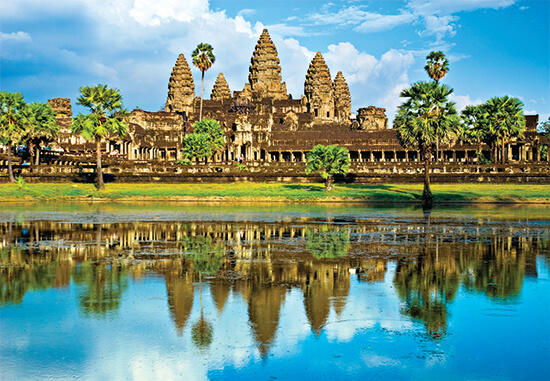 Travellers can visit Cambodia year-round. While the monsoon hits in May or June and lasts until October, visitors will usually only experience short, sharp showers, rather than days of lashing downpours.

December and January mark the cooler, dryer months but also the most popular. Accommodation will need to be organised in advance and a general (crowd-avoiding) plan for each trip to the temples should be in place.

Temperatures and humidity are usually at their highest around April, with daily averages often hitting 33°C+. Visits to the temples should be tackled in short stints, rather than all-day affairs. 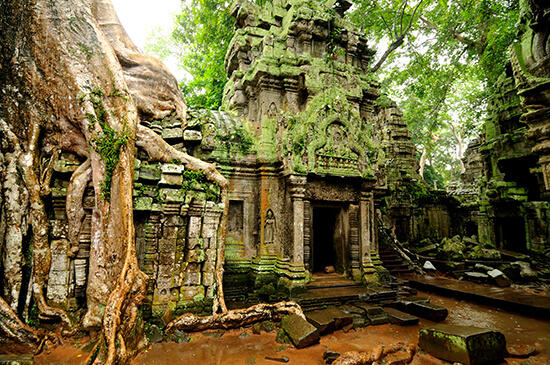 As the single largest religious monument in the world, Angkor Wat is an unmissable stop on your trip to Cambodia. One of the more iconic structures, it’s understandably popular so visit early and allow two hours to take it all in. Using a timed-ticketing system, visitors can climb to the upper levels (known as Bakan), which rise around 55m above ground.

Often touted as the most beautiful temple, Ta Prohm has been left unrestored and reclaimed by the jungle, offering visitors a more wild and other-worldly experience.

Bayon is another big-hitter with visitors. The temple’s 1,200m bas-relief carvings include 216 Buddha faces, which gaze pensively over the surrounding jungles. 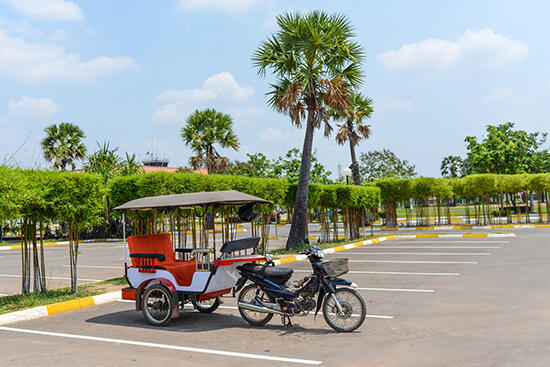 The Khmer temples are located at two mains sites, both of which are easily accessible from Siem Reap. Visitors can join tour buses and groups if they’re looking to tick off the main stops. For a more independent and authentic experience, motos (motorbike taxis), tuk-tuks and taxis can be hired for the day with the added bonus of a local guide who’ll gladly share their inside knowledge.

Alternatively, bicycles are available in many hotels in the town centre, giving you the option to explore at your own pace. However, note that the sites are a cycle from town, with Roluos located 9.9 miles south-east of the centre. Hiring your own scooter gives you the same freedom without as much physical exertion.

For travellers with a larger budget, tethered balloons can also provide an aerial view of the complex, but prepare for a hefty price tag. 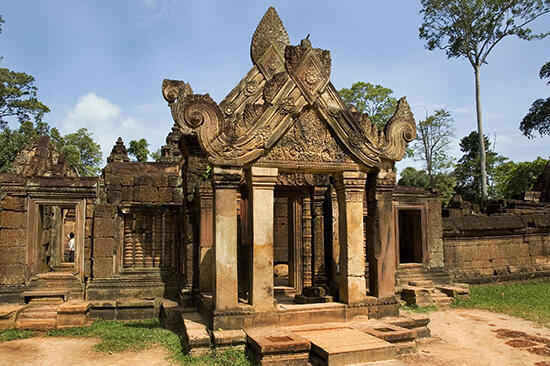 Watching the sun rise over Angkor Wat is a beautiful but busy experience. As a long-standing recommendation, daily crowds have gathered by the time the first rays hit. Instead, watch the day break at Ta Prohm or alongside the 216 faces of Bayon, for a more mystical atmosphere.

Uncover Banteai Srei’s intricate pink sandstone carvings: part of a smaller, more delicate – but none the less impressive – site. The temple’s name translates to ‘Fortress of the Women’ as the detailed decorations have been deemed too fine to have been forged by a man’s hands.

Just a 30-minute trek into the jungle, keen hikers can discover the complicated carvings of Kbal Spean. The ancient riverbed is home to hundreds of sacred Hindu carvings. 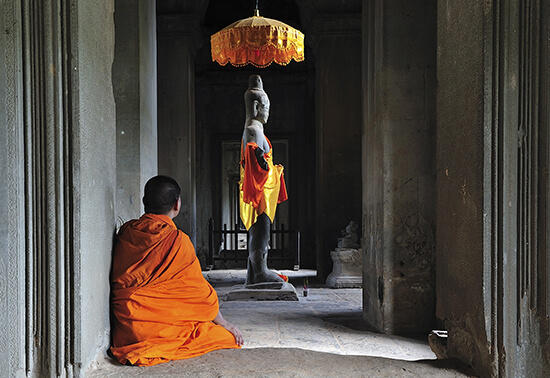 - Do dress respectively: Angkor is still a place of worship and you’ll see Buddhist monks around the temples. Ensure shoulders are covered, and keep shorts or skirts knee-length or longer.

- Don’t step off the marked trails around the sites: it’s tempting to explore further afield, however there are still some unexploded landmines around the area so it’s strongly recommended that you remain on the tourist route.

- Do pack a hat: the heat can be relentless. While there are stalls scattered around the complex, you’ll still need to ensure you have adequate water, food and sun cream supplies, as well as a broad-rimmed hat.

- Don’t snap away: always be respectful when using your camera. Ask permission from the person you’d like to capture, and be aware that many monks won’t approve.

Read these tips and feel prepared to explore the incredible Angkor Wat temple complex? Speak to one of our Travel Experts about our Cambodian Explorer Journey.

The past year has seen Daisy summit North Africa’s highest mountain, paddle-board along Portugal’s coast and hike solo around Wales. When she’s not planning her next adventure, she’s based in London working with Insight Guides (https://www.insightguides.com), and discovering the greatest places to explore in the city. Follow her adventures on Twitter: @daisy_cropper

7 Must-Visit Dark Tourism Destinations
Play it right and travel can be a fun, life-changing, reaffirming experience. But it’s not always about having a relaxing trip. Really getting stuck into a... Read More »
Cambodia
6 Things to Know Before You Go to Cambodia
Often overlooked in favour of its more popular neighbours – Thailand, Vietnam and Laos – Cambodia is finally starting to shout about all it has to tempt travellers... Read More »
Call:
0208 127 4273 0333 333 2211
Talk to a Travel Expert
Instant call back »We'll call you back for free
X