8 Reasons Why You Shouldn't Skip Manila

Few travellers hang around in Manila for long. That’s because the Philippines’ capital is not the white sand beaches, swaying palm trees and everything else that the country is famous for. In fact, it’s the polar opposite. Manila is better known for its congestion and general urban chaos rather than laid back vibes and beautiful vistas.

But Manila is perhaps the most misunderstood and misrepresented city in Southeast Asia, and while the traffic might be notoriously bad, this is the heart of the Philippines. This is where millions of people live and work and where hundreds of years of history and culture merge in a distinctly Filipino fashion. Colonial forts from the Spanish era stand next to flashy, modern skyscrapers. The world’s oldest Chinatown bursts with character, Jeepneys roar through the streets, and in Makati you can find some of the country’s most up and coming restaurants and rooftop bars.

You’ll never get used to the traffic, but give the city a chance, and you’ll find that Manila is much more than just a transit hub to the islands. This is one of the most exciting destinations in the Philippines, and to inspire you to visit the city, here are 8 reasons why you shouldn’t skip Manila. 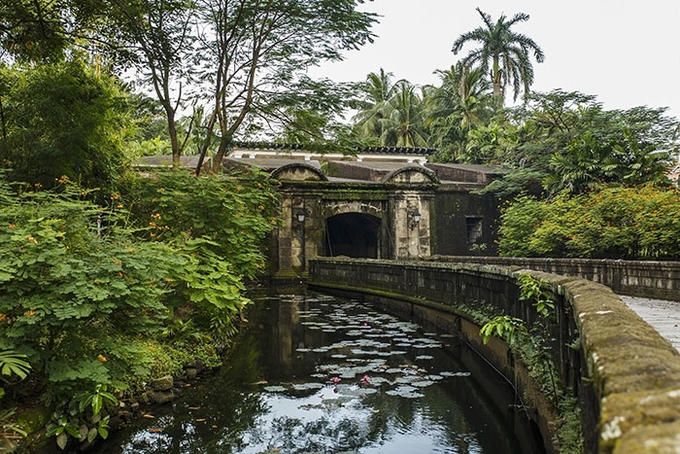 Manila is a city that’s rich in history, because for hundreds of years, the Spanish colonial rulers of the country left their mark on the architecture and the heritage. Unfortunately, much of Manila has been destroyed by earthquakes over the centuries, while during World War II the city was almost completely annihilated, but one area that has survived and been preserved is Intramuros.

This is the old city, and it dates back to the late 16th century when the Spanish made Manila the capital of their new colony. This is where the city you find today really began, but you’ll soon see that it’s very far removed from modern Manila. Intramuros literally means ‘within the walls’, and high stone ramparts surround cobblestone streets and ramshackle plazas. Manila Cathedral, the most important church in the country, stands tall in the centre of Intramuros, and you can explore old Spanish forts and colonial buildings as you take a step back in time. 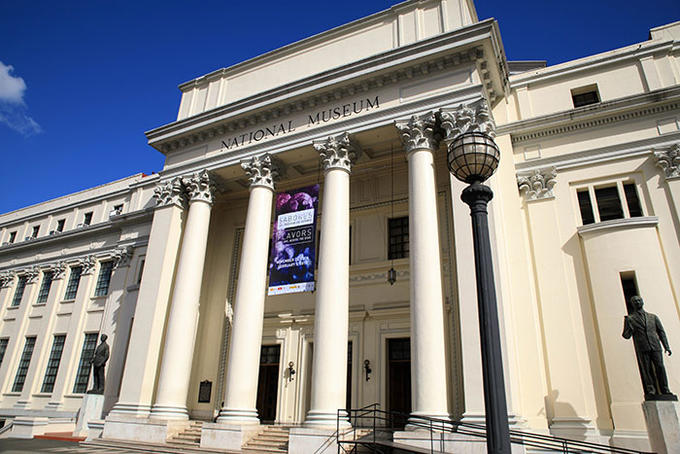 As the capital of the Philippines, Manila has some of the country’s most longstanding museums and galleries, and you’ll find that these historic institutions are a great place to learn more about the diverse culture and heritage that’s found across the 7000 islands in the archipelago.

In iconic Rizal Park, close to Intramuros, you can find the grand buildings that house the varied collections of the vast National Museum. You can browse through the collections in the national art gallery, delve into indigenous culture and traditions at the National Museum of Anthropology, or learn more about volcanoes and earthquakes at the Natural History Museum. 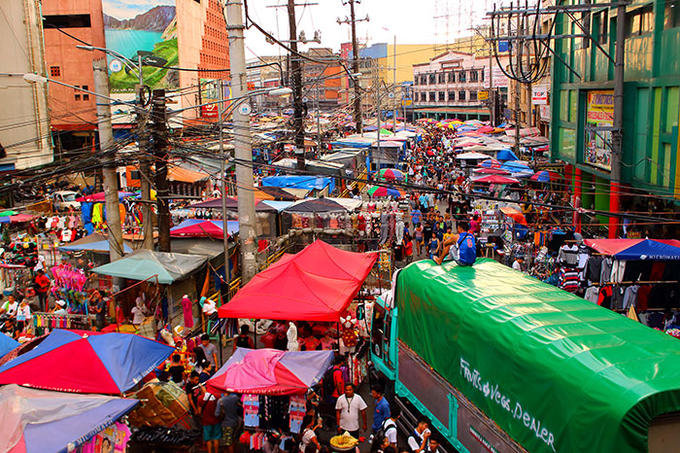 Manila is a city with an incredibly diverse heritage, and in the Binondo district, you can find the world’s oldest Chinatown. Binondo was settled by Chinese traders and immigrants in the late 16th century, right after Manila was made the capital of the Spanish Philippines. The Spanish though, wouldn’t let the Chinese live inside Intramuros, so instead, they began building settlements across the river in Extramuros, outside the walls.

Over the last four centuries, Binondo has grown into one of Manila’s most vibrant and lively districts, where you can find a fascinating blend of Chinese and Filipino cultures. You can haggle at the bustling markets, stroll through the historic streets, call into both temples and cathedrals, and most important of all, you can enjoy some of the best food in the city. 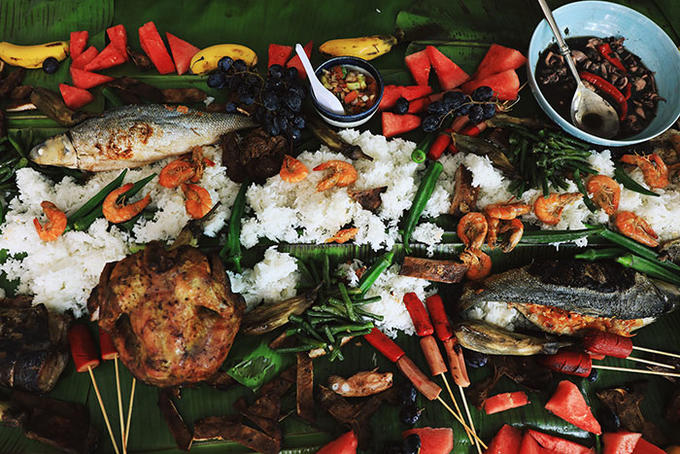 Okay, so in comparison to other Southeast Asian destinations, the Philippines isn’t exactly regarded as a foodie destination, but in Manila, if you know where to look, you can find one of the most exciting culinary scenes in the world.

The best way to discover the hidden culinary delights of Manila is to join a local food tour. In Chinatown, you can explore the district by eating your way through plates of steaming dumplings and spring rolls covered in noodles, while in modern Makati, you can tour through fusion restaurants and meet up and coming local chefs looking to put Filipino food well and truly on the map. 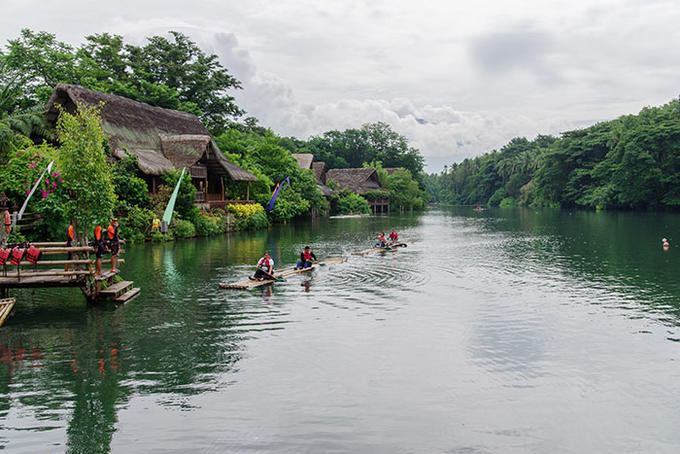 One of the best reasons to visit Manila is to take a day trip to Villa Escudero, where you can find one of the most spectacular restaurants in the Philippines.

Villa Escudero is an old plantation turned adventure park and it makes for a beautiful escape from the city. You can ride bamboo rafts along the river and hike through the forest, but the real highlight is the restaurant, which is located directly beneath a waterfall.

Rustic bamboo tables and chairs are set out next to the crashing water in the middle of the jungle, and you’ll be ankle deep as you enjoy a traditional Filipino meal in an incredible environment. 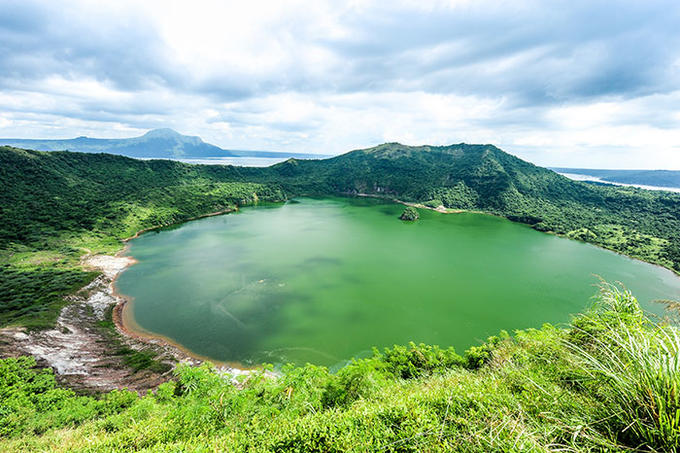 The crater of the volcano is filled with water, and the volcano itself is found in the middle of the vast Taal Lake, which was itself formed through volcanic eruptions. That means that what you’re looking at is a lake, inside a volcano, inside a lake. It’s a dramatic place to visit, and you can gaze out from viewing platforms, take boat trips across the lake, and if you dare, you can even hike to the rim of the Taal Volcano itself. Makati is Manila’s ever-expanding business district, and alongside the growing population and the huge numbers of skyscrapers and shopping malls, you can find the city’s best nightlife.

This is where Filipinos come to let loose after work and on the weekends, where you can see international DJs and artists playing any night of the week, or where you can enjoy a finely crafted IPA in a microbrewery or a masterfully composed cocktail in a speakeasy-style bar. Makati has it all, and if you’re looking for a night out, then this is the best place to go in the Philippines. 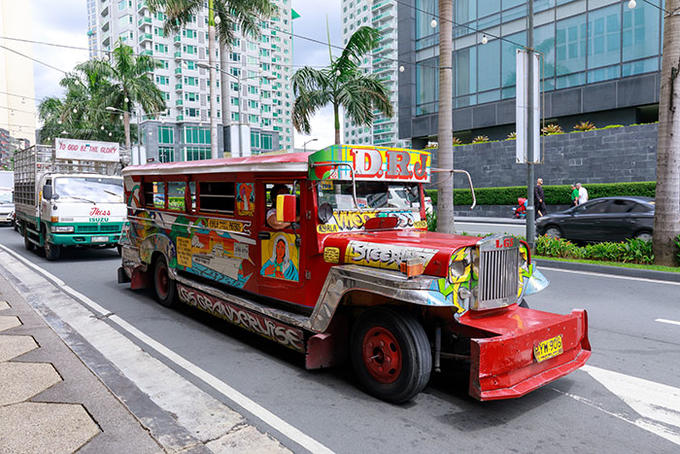 Jeepneys are possibly the most iconic sight that you’ll see in Manila. These converted jeeps are garishly decorated in loud colours and with unusual slogans, and they continually ferry people around the city, contributing more than anything else to Manila’s traffic problem as they go.

This is local transport at its best and its worst, but if you are feeling adventurous, then you can jump on the back of a Jeepney as it speeds past, and join the throng of packed passengers making their way around Manila for a unique, local experience in the city.

Keen to book a trip to Manila or the Philippines? Check out our range of Philippines holidays, and we'll tailor-make it easy!