8 of the Best Reasons to Visit the Great Barrier Reef

Why should I visit the World Famous Great Barrier Reef?

If the picture below isn't enough to inspire a visit to the Great Barrier Reef then hopefully this article will convince you that this natural world wonder definitely deserves a spot on your bucket list: 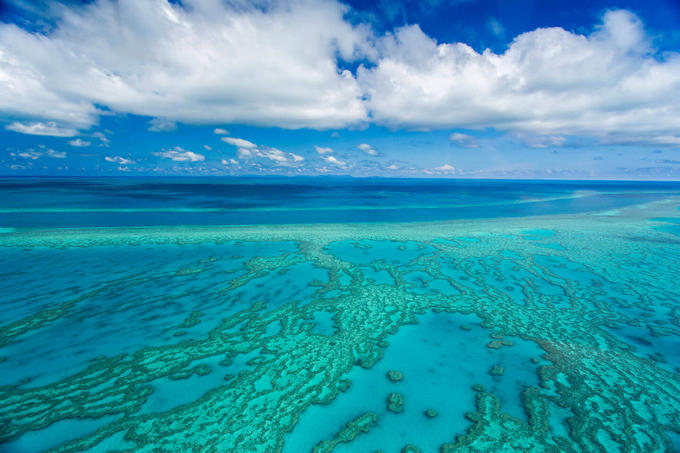 1. It is one of the Seven Natural Wonders of the World

The reef, as one of the most spectacular expressions of nature on Earth, joins Mount Everest, the Grand Canyon and Victoria Falls on the list of the Seven Natural Wonders of the World – and for good reason. The reef is quite unbelievably large, its sheer size is awe inspiring, stretching across a distance that is equal to the miles between London and Athens and covering an area roughly the size of Germany. It also is one of the most biodiverse environments on Earth, rivalled only by a handful of tropical rainforests. In fact, there are more fish species living in a two-acre area of the Great Barrier Reef than there are bird species in all of North America.

Oh, and did I mention the reef has World Heritage status? That’s right. In 1981 the Great Barrier Reef was inscribed onto the UNESCO World Heritage list. The 1,400-mile continuous stretch of reef ecosystem qualified as it was of extreme biodiverse significance – after all the reef is home to 400 types of coral, 1,500 species of fish, 4,000 species of mollusc, 133 species of sharks and rays, and 30 species of whales and dolphins, not to mention the endangered large green turtle and dugong. The reef is vital when it comes to coastal protection, fisheries and tourism; it receives over two million visitors each year. 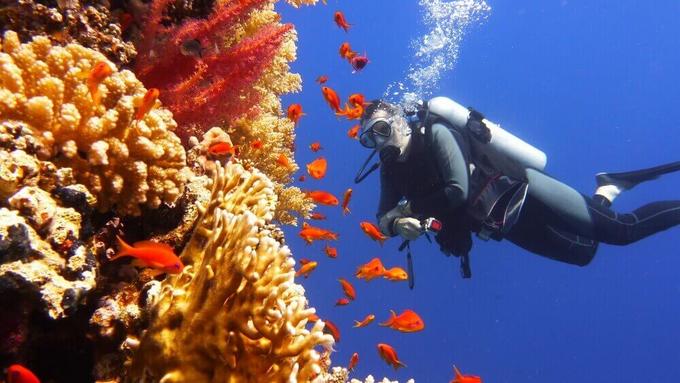 There really is nothing like diving into the warm yet refreshing tropical water of the Great Barrier Reef and tasting the slight saltiness of the water as you stare down onto the myriad colourful fish and corals below. Whether you are diving or snorkelling there’s something magical about hearing the gentle but persistent clicking of reef life as fish feed on the surrounding coral, darting around to form a rainbow of dazzling yellows, electric blues and jumpsuit oranges. The draw of being able to view these underwater wonders is surely one of the primary reasons to visit the Great Barrier Reef.

Those that are really adventurous will choose to discover the reef by scuba. The Great Barrier Reef is home to some of the best diving in the world, here are a few sites to whet your appetite: 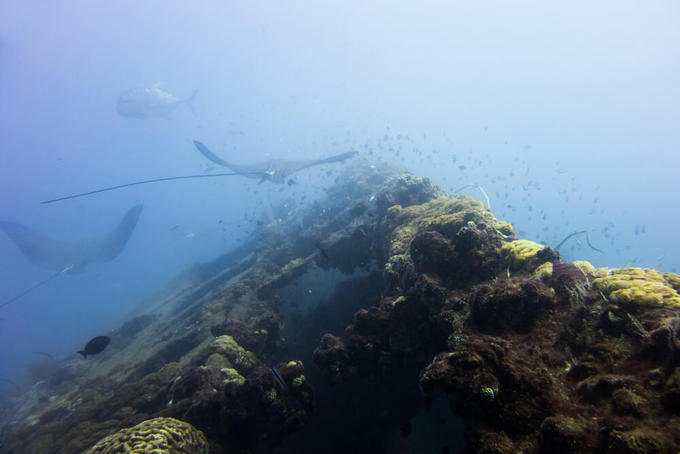 The SS Yongala, not far from Townsville and Magnetic Island, is consistently featured as one of the top 5 scuba dive sites on Earth. The dive site consists of a 100m steam ship which sank in 1911 during a cyclone and, even without the abundant sea life, is one of the best wreck dives in the world. At the wreck you can see myriad fish species as well as turtles, sharks and the majestic eagle and manta rays soaring past, and through, the dive site. If you visit during June to November you may even be lucky enough to spot minke and humpback whales. 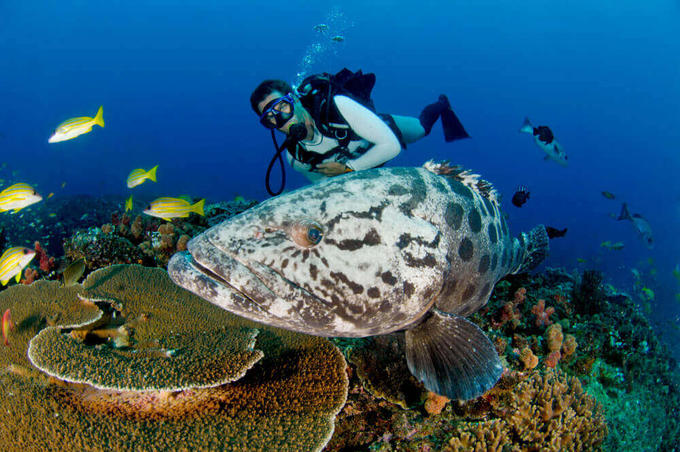 Cod Hole is considered by many to be in the top 10 dive sites worldwide and, predictably, the reason is the enormous tame potato cods that call this part of The Great Barrier Reef Home. At this site you are able to get close enough to appreciate the colossal size of these creatures, some of which weigh over 100kg and can be 2.5 metres long. White-tip reef sharks are also common here. 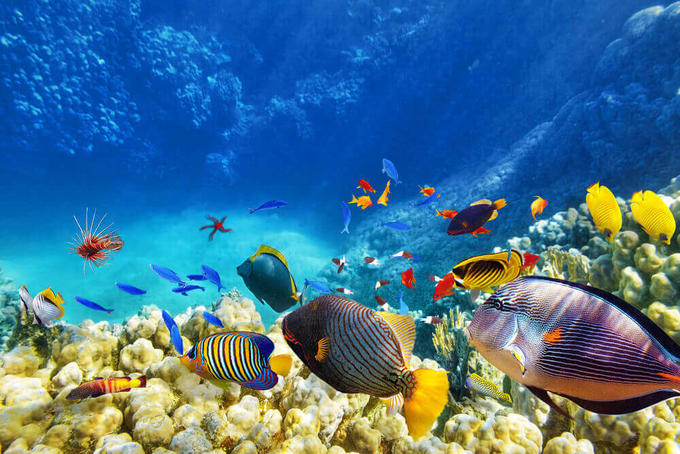 Almost all Great Barrier Reef encounters focus on the natural world as a collective, but it’s definitely worth focusing on some of the reef’s rock stars. 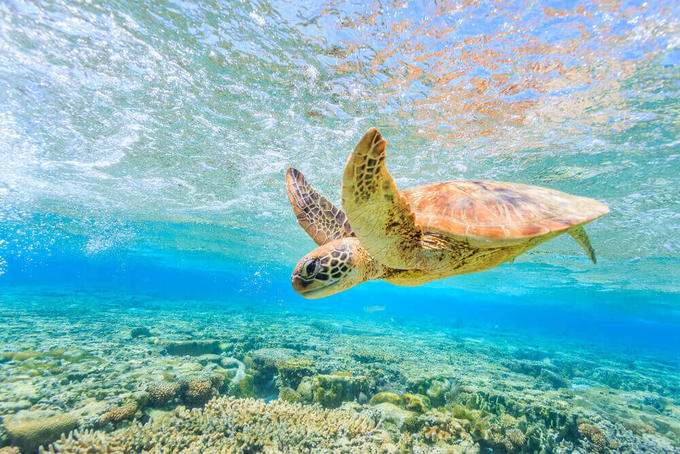 The Great Barrier Reef is home to six of the seven turtle species that can be found in the world’s oceans and seas: loggerhead, green, hawksbill, leatherback, olive ridley and flatback turtles. Whether you see them drifting elegantly past you on a diving or snorkelling experience or are lucky enough to witness them dash down the beach after hatching (hatching season is from January to March) the opportunity to see turtles is, surely, one of the most prominent reasons to visit the Great Barrier Reef. 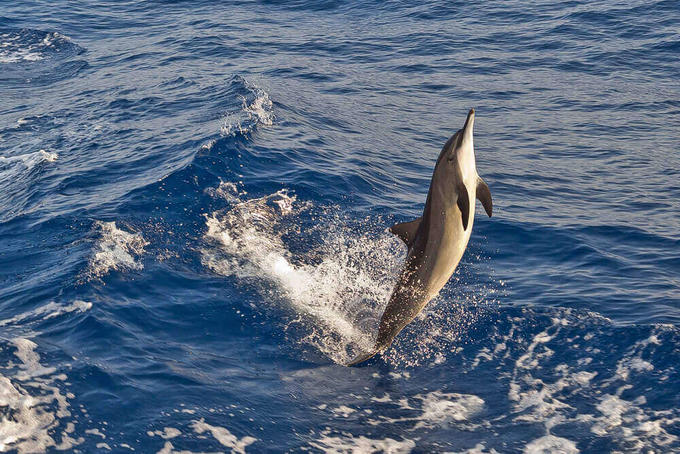 The most common Dolphin found on the reef is the spinner dolphin, named due to their acrobatic abilities. These playful creatures will often ride the bow wave created at the front of slow-moving boats, meaning tourists can get a pleasantly unexpected and up-close photo opportunity. If you want to get even friendlier with pods of these animals you can go on dedicated dolphin-viewing tours. On these excursions you can get into the water and swim alongside the dolphins so intimately that you can hear the clicking and screeching of their chatter with each other. 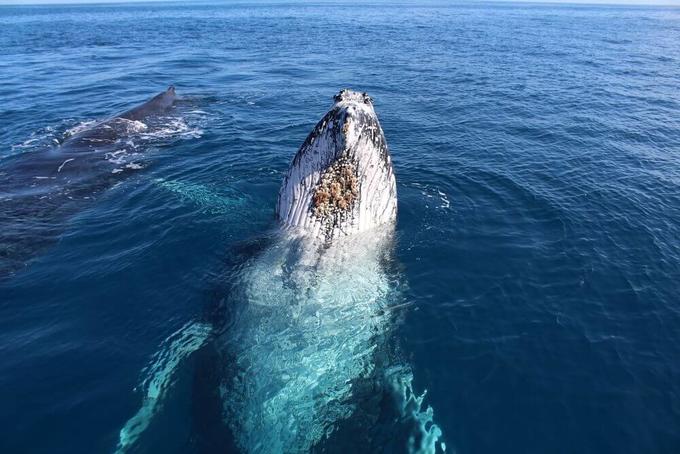 Behemoths. Whales are behemoths. There is surely no better way to describe them. Humpback whales are, perhaps, the most iconic of all Australian whales due to their penchant for dramatic acrobatics such as breaching, fin slapping and tail slapping. They migrate along the distance of the Great Barrier Reef from the cold waters of Antarctica, and are best viewed on a whale-viewing tour from areas such as Hervey Bay. 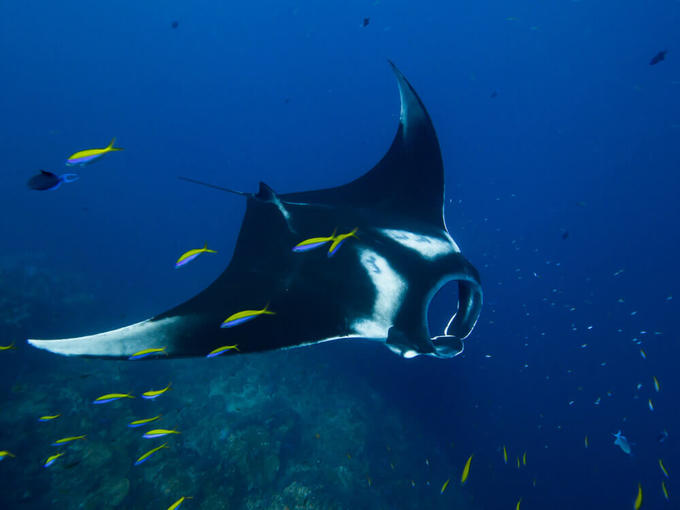 Manta rays are a must see if you are visiting the Great Barrier Reef. These gentle giants glide so effortlessly through the water that many people describe the motion as being more akin to flying than swimming. These giants have a wingspan of over seven metres which makes them all the more breathtaking when they glide past so gracefully. The best chance of viewing them is from Lady Elliot Island. 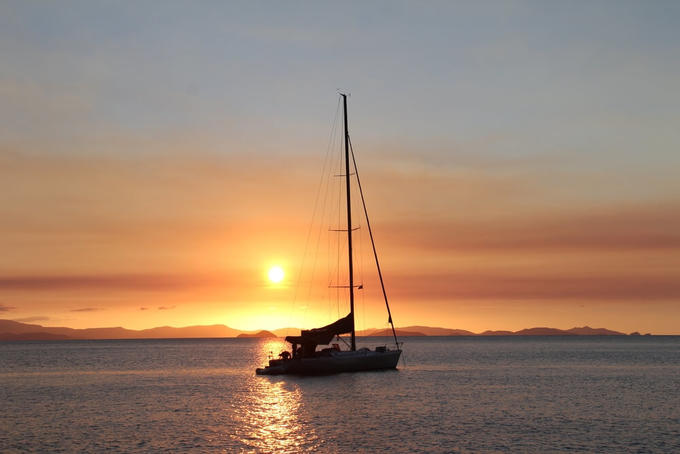 The 74 Whitsunday Islands are the pearls in the crown of the Great Barrier Reef, they are located at the southern end of the reef, off the coast of the seaside town Airlie Beach and 1.5 hours' flight north of Brisbane, Queensland. They house an array of beautiful resorts and offer up a feast for the senses, with secluded beaches and friendly towns. 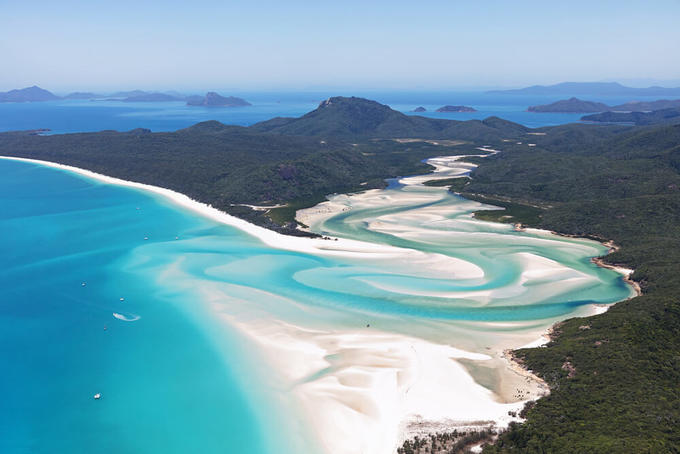 Would you like to lie on a beach made of the purest white sand in the world? Of course you would! Well on Whitehaven Beach in the Whitsunday Islands you can … another great reason to visit the Great Barrier Reef. This award-winning beach is the jewel in the crown of the Whitsunday Islands and is best enjoyed from the air. 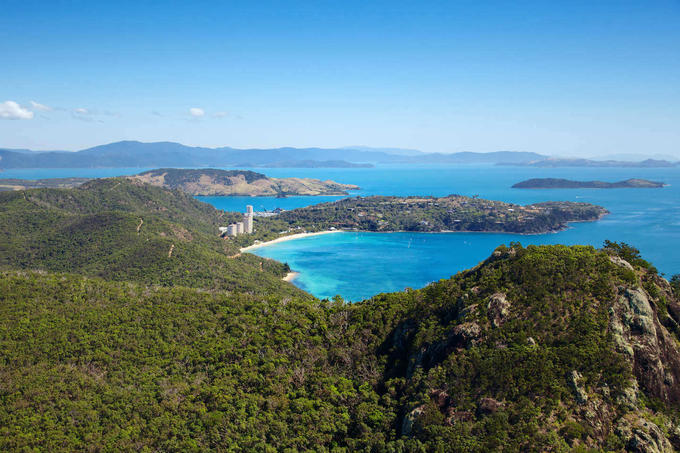 Be the captain of your own ship and work up an appetite whilst doing it by kayaking around the Great Barrier Reef. The waters surrounding the corals and most islands are peaceful and great for exploration by kayak; drop in and out of the water at your leisure or find your very own secluded beach to kick back and relax on.

An adrenaline-inducing mix of ziplining, abseiling and climbing through riverbeds, canyoning is growing in popularity. The sport allows you to safely traverse through beautiful surroundings, such as the Behana Gorge. 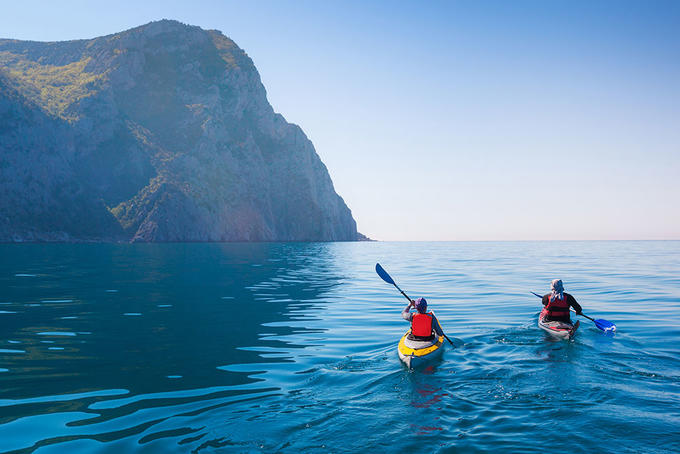 The night sky in the Great Barrier Reef and northern Queensland is some of the least polluted in the world by noise, light or by chemicals. The Great Barrier Reef is, therefore, a great place to stargaze and participate in some amateur astronomy. For a truly memorable experience take out a sleeping bag, or ‘swag-bag’, and sleep under the stars. 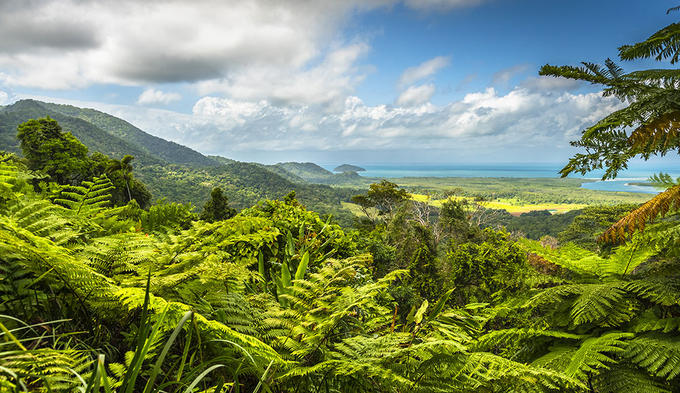 Whilst not strictly part of the Great Barrier Reef, one of the most compelling reasons to visit the Great Barrier Reef is its proximity to another World Heritage-listed site – the Daintree Rainforest in Tropical North Queensland. In fact, the Great Barrier Reef and the Daintree Rainforest are the only two UNESCO World Heritage sites to actually touch. The meeting of these two protected areas provides unique and noteworthy wildlife, as well as the most superb opportunities to experience an array of natural wonders in a small space of time. In a day you could go from treetops and rainforest trails to the surf along a pristine beach, or snorkelling amongst vibrant corals. 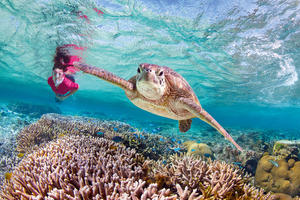 I work in the online marketing department at Flight Centre and am passionate about inspiring others to take the leap to travel. I love exploring the natural world - whether it’s under the waves, up mountain peaks or down in the dirt!

Queensland
Why You Shouldn't Miss the Queensland Outback
A Queensland holiday typically consists of adventures in ancient rainforest, lazing on incredible beaches and exploring the wonders of the Great Barrier Reef. And it’s... Read More »
Queensland
A View From Above: Queensland's Heart Reef

Take to the skies with Flight Centre's Phil Murray for a bird's-eye view of beautiful Heart Reef...