Flight Centre Travel Blog/10 Christmas Traditions from Around the World

10 Christmas Traditions from Around the World

Not long 'til Christmas now, and you'll soon be enjoying your mince pies and mulled wine while feeling suitably stuffed from far too much turkey. But as you set fire to your brandy-soaked Christmas pud and settle down to watch the Queen’s speech, what yuletide traditions are being practised in other parts of the world? Read on to find out… 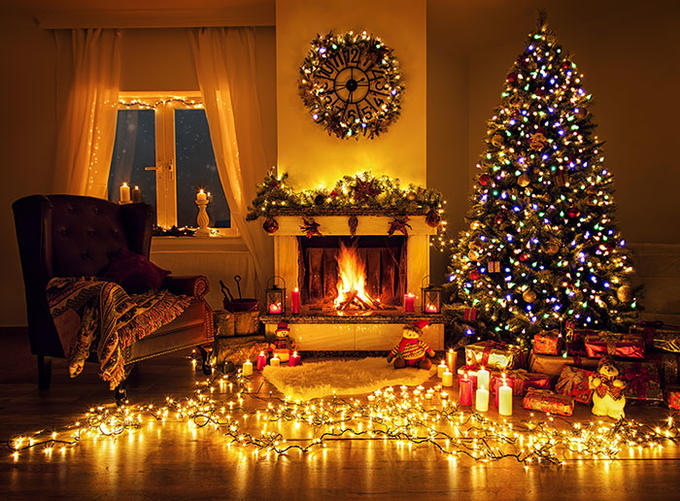 On Christmas morning, the roads in Caracas are closed to traffic to allow citizens to roller-skate to church. Yes, that’s right, roller-skate to church. In addition to this, children living in houses along the skating route tie one end of a piece of string to their big toe and hang the other end out of the window for the roller skaters to tug on (gently, we hope) as they whizz past. Quite why this bizarre custom caught on is unknown. 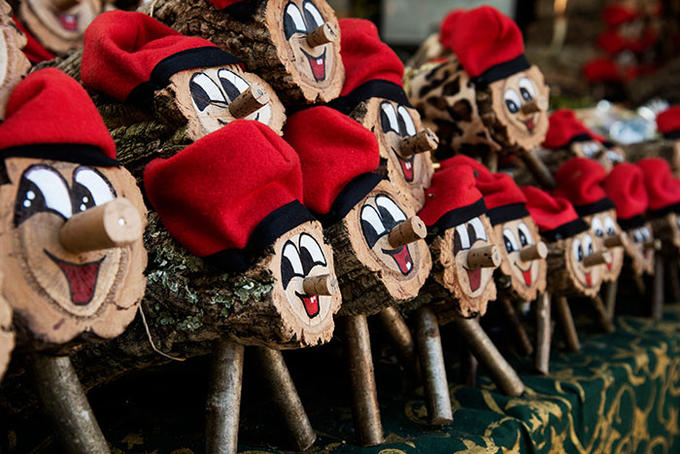 If you thought festive roller-skating was eccentric, try this for size. Tió de Nadal, which translates as the Christmas log, is a Catalonian tradition whereby a smiling face is painted on the end of a hollow branch. During advent, children are charged with looking after the log, giving it sweets, fruit and treats to ‘eat’ every night and keeping it warm with a blanket. On Christmas Day, the log is placed by the fire and beaten with sticks while the children sing the Caga tió song, whose rather crude translation is best left to your imagination. The tió obligingly defecates sweets, nuts and dried figs, depositing them under its blanket. When it has ‘done its business’ it lets you know it has finished by dropping a salted herring, a clove of garlic or even a puddle of water. The ‘poops’ are then shared between the children.

According to local Guatemalan legend, the devil lurks in the dark corners of your house, hiding under the bed, behind the curtains and in the back of the cupboards. Consequently, on 7th December, homes are cleaned from top to toe, and any unwanted items removed and put in a large pile in the street. A papier mâché effigy of satan, like the one above, is placed on top of the rubbish heap and set alight at 6pm sharp, eliminating the evil spirits just in time for Christmas. 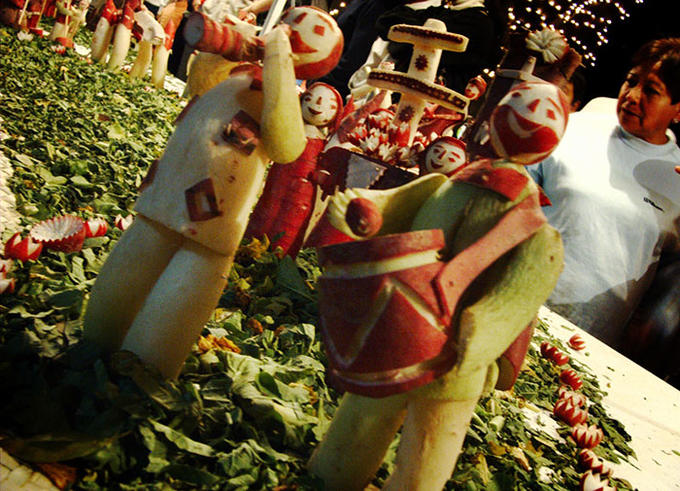 Night of the Radishes, Oaxaca, Mexico

La Noche de Rábanos began in colonial times when radishes were introduced to Mexico from Spain. At that time, many Oaxacans were skilled woodworkers, so to attract punters to the annual Christmas market, they used their expertise to carve intricate designs into the radishes. In 1897, a radish-sculpting competition was established, and today the event attracts over 100 entrants and thousands of visitors. Radishes wilt pretty quickly so queues stretch around the block with spectators clamouring to see the vegetable artworks before they start to droop. 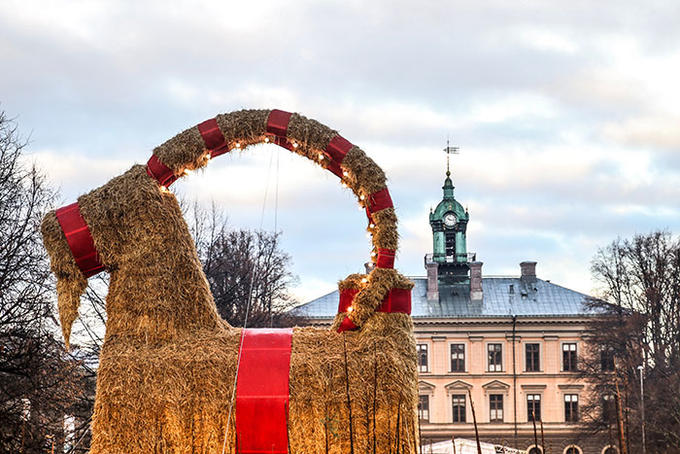 Every December the residents of Gävle in Sweden make a giant goat out of straw and stand him proudly in the town. The first goat was constructed in 1966, but unfortunately the poor creature accidentally caught fire on New Year’s Eve. In the years after this, the sculpture was frequently targeted by arsonists intent on destroying it, and the burning of the goat soon became something of a tradition. Despite the goat being burned down no less than 27 times in almost 50 years, it must be noted that it is not meant to catch fire, and vandals have been prosecuted for damaging it.

Known as Ganna, Christmas in Ethiopia is celebrated on 7th January following the Coptic Orthodox calendar. On the big day itself, worshippers wearing the traditional shamma, a white toga-like cloak with brightly-coloured stripes, flock to church for music, dancing and singing. In the afternoon, locals head to the fields for a game of Ganna, a type of hockey that gives its name to the day. It is thought that this game was played by the shepherds the night they heard Jesus had been born. Participants use curved sticks and a hard leather ball, and often become rather raucous, with fierce rivalry and broken bones not uncommon.

3. In Japan, Christmas is all about KFC. Since the mid 70's, the Japanese have made it a tradition to go and queue (up to 2 hours) for a Christmas bucket from the Colonel. The 'Christmas Dinner' bucket now comes with cake and champagne and most people now order them months in advance to avoid queuing. #kfc #japankfc #kurisumasuniwakentakki #kfcchristmas

In 1974, a successful advertising campaign by Kentucky Fried Chicken proclaimed ‘Kurisumasu ni wa Kentakkii!’ or ‘Kentucky for Christmas!’ convincing the Japanese that deep-fried battered chicken and yuletide go hand in hand. So, every year on 25th December, millions of Japanese queue up at their local KFC for their Christmas dinner, served in a festive-themed bucket and often accompanied by Champagne and cake. It may sound like a joke, but this is serious business: orders are often taken months in advance, and even Colonel Sanders dresses up as Santa for the occasion, with many children believing he is the man himself.

India’s 35 million Christians go to midnight mass and give presents at Christmastime, despite it not being an official holiday. With a lack of the traditional fir tree, mango and banana trees are decorated with lights and baubles, and some households use mango leaves to decorate their homes. 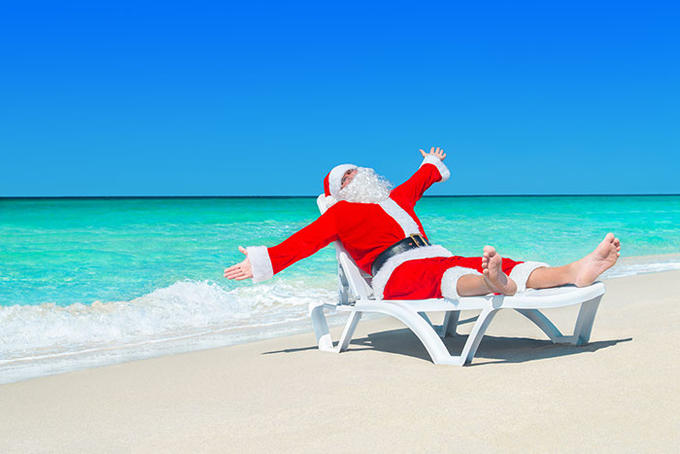 Christmas on the beach, Australia

Forget the cosy fireside scene, in the southern hemisphere Christmas falls in the middle of the summer, so it’s usually sweltering hot. With not a snowflake or a robin in sight, the best thing to do is to grab your cossie and join the rest of the surfing Santas down on the beach. Many families cook Christmas lunch on the barbecue, tucking into sizzled sausages and flame-grilled turkey with prawns and lobster. In the absence of holly, Australians decorate their houses with Christmas bush, an indigenous plant that flowers red only in summer.

The first Sunday after New Year’s Day is known as Three Kings Day, the official end of the festive season. To commemorate the event, Filipino children put their shoes outside the front door and wait for the Three Kings to leave gifts and sweets inside, similar to the western practice of putting up a stocking.

Check out these traditions for yourself and make an appointment with one of our Travel Experts today to book a festive break to suit you.

World
The Best Christmas Drinks from Around the World
IT'S CHRISTMAS! The Flight Centre crew just LOVES the festive period, and what makes Christmas Day even more enjoyable? Why, a seasonal tipple of course! To mark... Read More »
World
Weird Christmas Traditions Around the World
Every family has their own traditions when it comes to Christmas. Some like turkey while others like goose. Some leave carrots for the reindeers and some leave mince... Read More »
Call:
0800 587 0058 0333 333 2211
Talk to a Travel Expert
Instant call back »We'll call you back for free
X