Travel blogger and sugar-addict Sophie Williams discovers the cafe culture of Hungary’s capital – and indulges in a few luxurious treats along the way.

Budapest is becoming an easy weekend getaway destination thanks to its fantastic budget airline links to the UK. Nicknamed the ‘Paris of the East’, the Hungarian capital is known for its stunning buildings and world class music scene.

As a late Christmas treat, I headed to Budapest to explore the city and see what it has to offer. The first thing I noticed? The city’s thriving café culture.

Budapest’s café culture originates from the beginning of the 1900s when there were over 500 coffee houses in the city, however many of these were destroyed during the wars. Nowadays, you can still find a coffee shop on every street corner to grab yourself a warming drink.

Over my weekend spent in the city, I explored some of Budapest’s finest cafés and discovered two that are completely unmissable.

The first must do is the New York Café. Adjoining the Boscolo New York Hotel, the café is a 20 minute walk from the city centre and is considered to be one of the most prestigious in Budapest. New York Café has hosted some of Hungary’s famous writers and poets during the 20th century. Some of the country’s celebrities and political figures still meet here today to discuss important matters over a delicious drink. 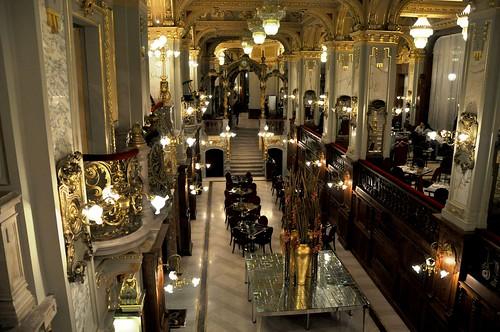 I sit down on one of the tables and take in the art deco architecture and glittering chandeliers while a man on the grand piano plays classical tunes. 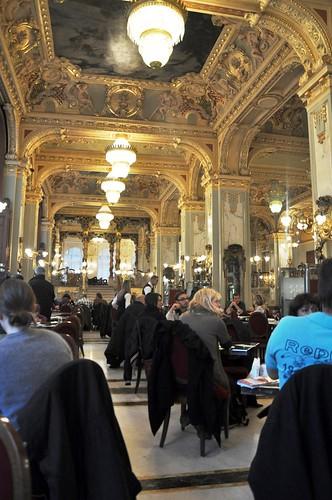 The menu offers many different dishes – from New York Cheesecake to traditional Hungarian cuisine. But if there’s one thing that will really impress you – it’s the café’s long list of hot chocolate choices. I decide on the white strawberry hot chocolate with strawberry cinnamon, covered in whipped cream with fresh strawberries on top. Cue me, Instagramming it as soon as it arrives on the table. (Take it from me: it tastes even better than it looks.) 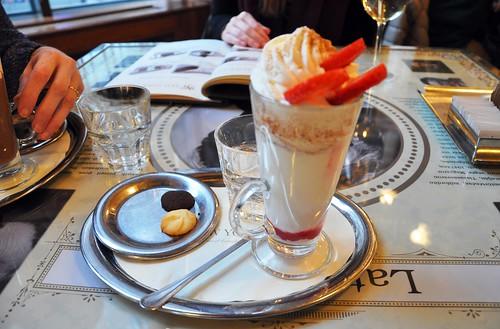 If you want to try some of the best cake and ice cream in Budapest then you have to visit Café Gerbeaud in Vörösmarty tér.

Gerbeaud is one of the oldest known cafes in Europe and is renowned locally for its tort and ice cream sundaes. In summer, Gerbeaud serves its much-loved ice cream on the terrace.

I walk into the café past some of the scrumptious treats in the counter. Gerbeaud prides itself on its special Gerbeaud cake which is a delicious-looking sponge cake with walnut and jam.

However looking at the menu, something else has caught my eye – the strawberry ice cream sundae. Made up of sponge pieces, strawberry chunks, ice cream, whipped cream, strawberries and then topped with a strawberry macaroon, the desert is quite honestly a work of art. By the time I’ve finished that and the strongest hot chocolate I have ever tasted I’m feeling a little queasy – but in a good way of course! The waitress asks if we want anything else and I decline rather politely; my stomach is bursting at the seams. 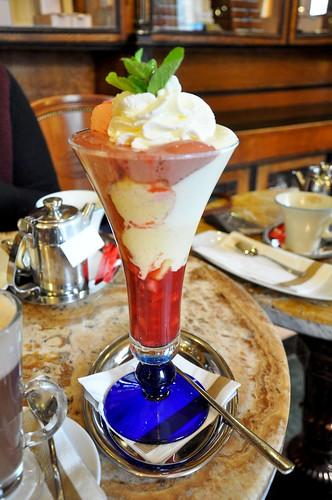 Flash forward a day and I’m back in freezing cold London. I grab myself a hot chocolate at Paddington, remembering that they’re just not as good as the ones in Budapest. I’m still dreaming of the strawberry white hot chocolate and planning my inevitable return to this wonderful city.

Desperate to try the white strawberry hot chocolate with strawberry cinnamon, whipped cream and fresh strawberries for yourself? (We know we are!) Fly to Budapest with British Airways flights from £185.