12 Striking Examples of Islamic Architecture that You Should See

Islamic architecture, with its vibrant colours and ornate arches, has given us some of the world’s most striking buildings. While the majority are mosques, you’ll also find some impressive tombs, palaces and forts adorned with the style’s distinctive minarets and domes. But it’s the finer details that are perhaps the most remarkable, with repeating geometric shapes and intricate calligraphy covering many interior walls and ceilings, as well as the Rub el Hizb, the ubiquitous Islamic eight-pointed star made from two overlapping squares which, if you look carefully, you’ll see everywhere.

We’ve scoured the globe for the most eye-catching examples of Islamic architecture; here are our favourites: 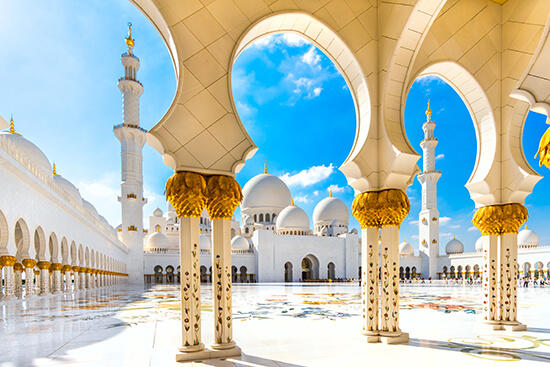 The largest mosque in the United Arab Emirates (UAE), the Sheikh Zayed Grand Mosque was the brainchild of Sheikh Zayed, the country’s former president, who is buried within the complex. Constructed between 1996 and 2007 from mostly natural materials, the gleaming white marble façade includes more than 80 domes inlaid with gold and semi-precious stones, and is particularly striking when viewed against the bright blue sky. It’s definitely worth going inside, where seven chandeliers, one of which weighs 12 tons, glitter extravagantly with Swarovski crystals.

Better yet, it’s possible to see the Sheikh Zayed Grand Mosque on a layover at Abu Dhabi International Airport. Yes, that’s right: if your transit time is four hours or more, you can take a taxi to the building, have a look around and be back again in time for your onward flight. Chat to your Expert for further information. 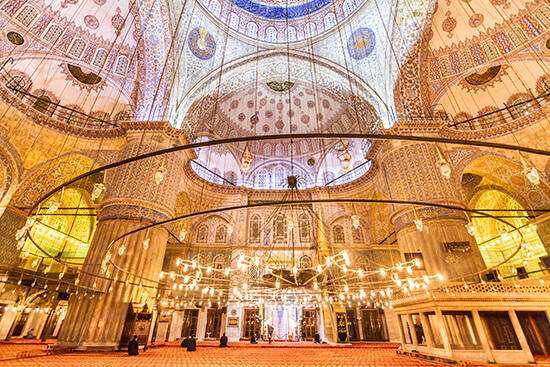 One of the world’s most famous religious buildings, the Blue Mosque is found in the heart of Istanbul, its six minarets puncturing the sky dramatically, high above Sultanahmet Square. Constructed in 1616 and still in use today, the interior is covered head-to-toe in around 20,000 hand-painted blue ceramic tiles and over 260 stained glass windows, which bathe the prayer hall in a soft blue light at dusk, inspiring the name ‘Blue Mosque’. 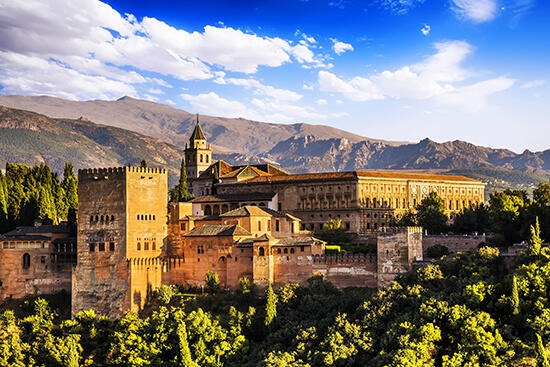 This palace-cum-fortress is one of Europe’s finest architectural jewels, shining brightly in the Andalusian sunshine from its prime hilltop position. Built in 889 and restored in the 13th century, it’s now a UNESCO World Heritage site, famed for its Moorish influences, dainty fountains and geometrically patterned ceilings. It’s immensely popular, so to really appreciate its detailing, come outside of the summer period, when crowds diminish slightly. 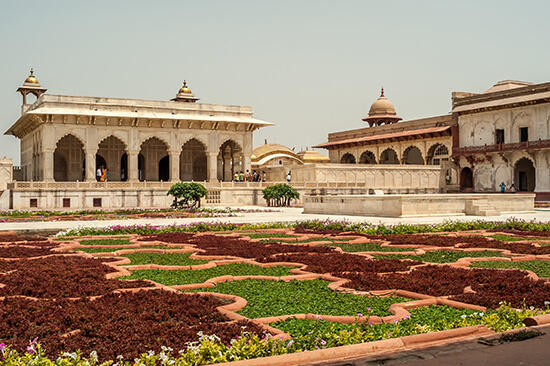 Believe it or not, there is more to Agra than just the Taj Mahal. Yes that’s right, rather than a fleeting visit to the city, it’s worth staying a night or two to take in the other sights, including the palatial Agra Fort. Here, you can while away an afternoon wandering through the red sandstone arches and perfectly manicured gardens, and admire the wonderful views of the distant Taj Mahal from the fort’s raised position above the Yamuna River. 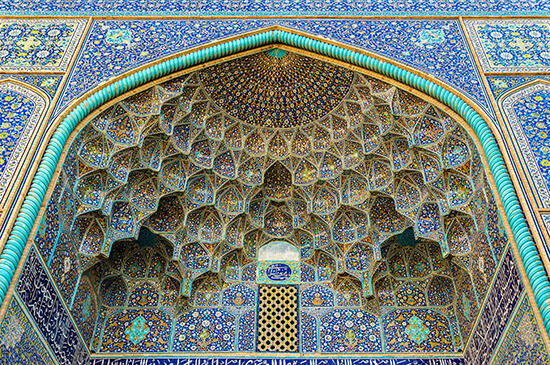 Considered the most beautiful mosque in Iran, Isfahan’s pride and joy really is something special. Unusually, it has no minarets, but this doesn’t detract one jot from the vivid mosaics and fine floral patterns of the interior, as well as the spectacular muqarna (pictured), an ornamental vaulted ceiling, which in this case is inlaid with ceramic tiles of every shade of blue. 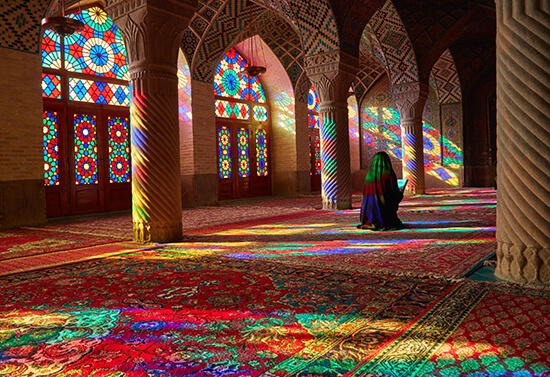 Also known as the Pink Mosque, this refined building is most famous for its stained-glass windows, which cast a kaleidoscope of light across the carved pillars and Persian carpets, creating a dazzling dancefloor-like effect best seen in the low light of morning. 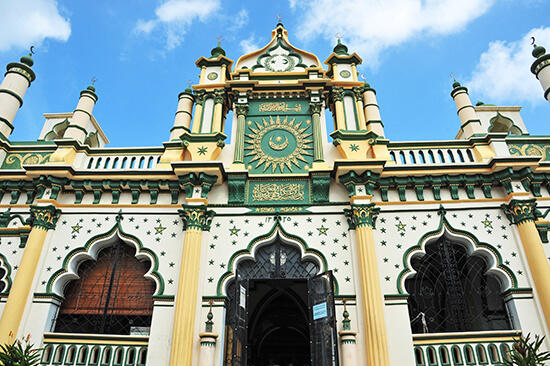 Found in the heart of Singapore’s Little India, this colourful mosque is cobbled together from a mishmash of Indian, Moorish and Victorian ideas. Don’t miss the one-of-a-kind sundial found above its entrance (pictured), where 25 rays of sunlight are inscribed with the names of the 25 prophets in Arabic calligraphy. 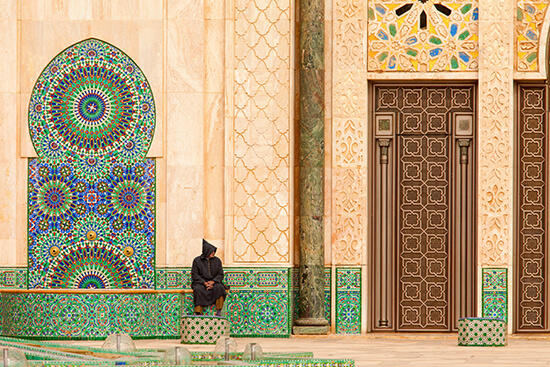 Standing proudly on the edge of the Atlantic Ocean, Hassan II Mosque is the largest in Morocco and boasts the tallest minaret in the world, at 210 metres. Unusually for Morocco, its fountain-filled courtyards are open to non-Muslims; definitely worth a peek for the exquisite tilework and psychedelic patterns inside. There’s even a glass floor here, allowing worshippers to pray with the waves crashing beneath them. 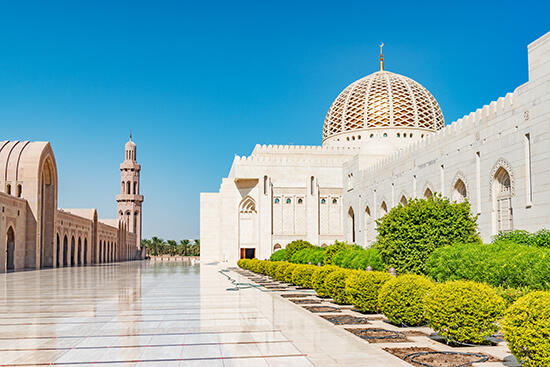 Oman’s main place of worship, Sultan Qaboos Grand Mosque is a modern construction, completed in 2001 from 300,000 tonnes of Indian sandstone. Highlights include the Swarovski crystal chandelier and the vast Persian carpet, whose 1.7 billion knots took 600 women four years to tie, making it the second largest single-piece carpet in the world. 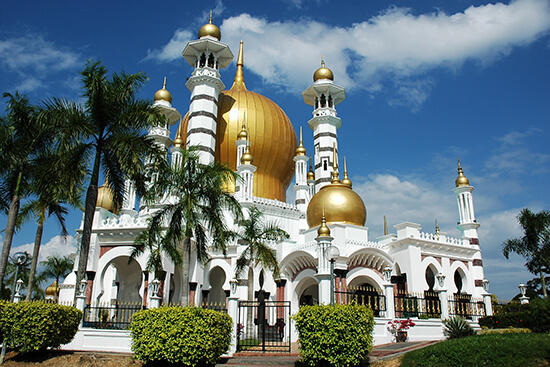 When Ubudiah Royal Mosque was under construction in 1913, two elephants walked across the imported Italian marble floor, cracking it and causing building work to grind to an expensive halt... or so the story goes. It was eventually completed three years later and today its huge gold domes are the star attraction, while the purple marble stripes on the exterior add a bit of pizazz. 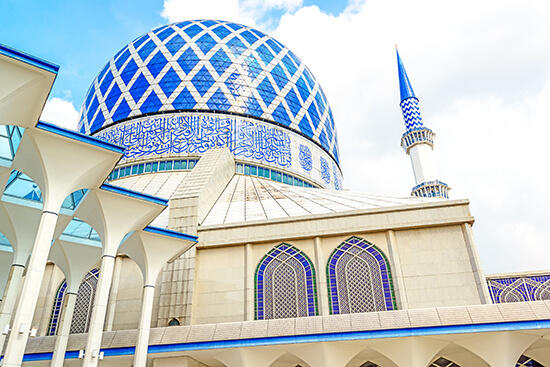 The enormous Sultan Salahuddin Abdul Aziz Mosque, also known as the Blue Mosque due to its cobalt-hued stained glass windows, has space for 24,000 worshippers, while its beautiful 51.2-metre blue and silver crown holds the title of the world’s largest dome on a religious building. The four minarets are over 140m tall too, making them visible from miles around, including from Kuala Lumpur, 17 miles away. 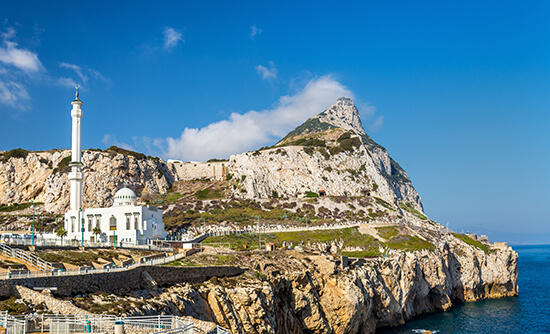 Perhaps less about the mosque itself and more about its setting, Ibrahim-al-Ibrahim Mosque sits dramatically at the foot of the Rock of Gibraltar in the British overseas territory of Gibraltar. Opened in 1997, the mosque was a gift from King Fahd of Saudi Arabia, who wanted Moroccans working in Gibraltar to have a place to worship. It is the largest mosque found in a non-Muslim country and stands just a stone’s throw from the Shrine of Our Lady of Europe, a Roman Catholic church, a fact that proud Gibraltarians say shows the harmony between the two religions.

Inspired to soak up the beauty and symmetry of one of these examples of Islamic architecture? Make an appointment with one of our Travel Experts to book your holiday today.