Where to go this Winter

Oh why, oh why are we talking about winter, we hear you ask. We're well aware that the last dregs of summer (if you can call it that!) are still with us, but we know that many of you like to plan ahead. For those who want to secure a winter holiday to the usual, the unusual, the hot or the unbelievably cold, these are the places to visit this winter:

Australia is a popular destination over the winter months – and why not, it’s summer again? If you really want a memorable holiday, try and be in Sydney for the New Year. As the sunsets and the warm evening cools, you’ll find yourself submerged in a crowd of Aussies seeing in 2016.

Awe as Sydney’s iconic Opera House glows from red, to blue, to pink as an impressive show of fireworks light up the Harbour Bridge. There are few better ways to experience one of Australia’s greatest cities.

When: Arrive in Sydney by 31st December to experience this bucket-list spectacle.

Banff National Park is beautiful at the best of times, but it really comes to life when it’s blanketed in snow. The Canada SnowDays celebrate all things winter – skiing, music, and of course, hot food to warm you up. There’s plenty to do on your days off, from racing down the slopes, gazing at ice sculptures in the Wonderland and watching snowboarding pros show you how it’s done, to cheering on a game of curling. When you’re all done, warm up with a hot chocolate and a dip in the steaming Banff Upper Springs.

When: Pack your thick coats for 9th January to 7th February 2016.

Japan is no stranger to the wacky, but you’ll really find yourself in a real quirky, cultural whirlwind at the Hadaka Matsuri festival.

The festival dates back to 767 AD, when there was a strong belief that nudity could absorb all of the bad luck and evil. It's a belief that, to this day, is still practised in Tokyo, Kyoto, Osaka, Inazawa City and Sendai every February. Visit during this time and you'll find over 10,000 half-naked men at the Saidai-ji Eyo Hadaka Matsuri in Okayama, wearing little else but a loin-cloth and leaving nothing to the imagination. Participants gather at the Saidai-ji temple before being released to catch sacred lucky sticks, known as shingi, to gain the honour of being the ‘Lucky Man’. Finding these sticks is not an easy feat, especially as the search is conducted in the dark and objects are thrown from the top of the temple as a non-violet rumble for the title of ‘Lucky Man’ ensues.

When: Bring your camera and a very open mind to Japan on 20th February.

You COULD spend Boxing Day watching Harry Potter, you COULD celebrate New Year’s at another underwhelming house gathering, or …you COULD be partying in the Bahamas at Junkanoo.

A technicolour spectacle of drums and dancing rips through Bay Street in downtown Nassau to celebrate cultural freedom. Junkanoo is one of the oldest street festivals in the Caribbean and dates back to the years of slavery, when slaves were given three day’s holiday to leave the plantations and celebrate with their friends and families.

Despite its dark origins, you’ll find yourself swept up in the free spirit of this cultural bonanza. Intricate costumes made from feathers are worn as dancing, musical, and best-dressed competitions are held.

When: Experience a different post-Christmas celebration on 26th December. 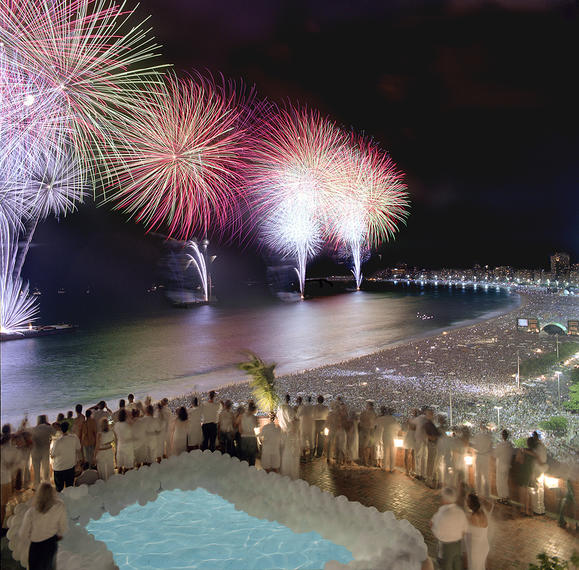 If you can’t make it to the massive Rio Carnival on 5th February, try to coincide your Brazil holiday with Reveillon.  Who else will be seeing in the New Year at the world’s biggest beach party?

Bump shoulders with locals in cultural dress, dance to traditional music, and enjoy an abundance of that moreish South American food. Oh, and this all takes place on the iconic Copacabana Beach, but you won’t be seeing any speedos around here as the dress code is strictly all-white (unless you’ve got some white trunks at the back of your cupboard). White is believed to symbolise purity and bring hopes into the New Year, black is believed to be bad luck so avoid it at all costs.

When: Pack your swimmers and sandals for 31st December to 1st January.

Comic Con, VidCon and now SantaCon. If there’s one thing the USA loves to do, it’s a convention, although this isn’t your conventional convention.

To get into the Christmas spirit, thousands of San Francisconites, holidaymakers and festive enthusiasts take to the streets of the City by the Bay dressed as Kris Kringle himself. Think of it as a Santa-themed pub crawl on a momentous scale. Closer to the time, you can find routes and starting locations, as well as some health and safety guidelines – no one needs to see a drunk St Nick.

When: Iron your favourite Santa costume and wait for the December dates to be confirmed. Disney is magical whatever the time of the year, but when it’s dressed in fairy lights and Christmas trees, you and your children will be guaranteed to remember this Christmas for a very long time.

Cinderella’s castle is decorated with icicles and shining lights, creating the perfect backdrop for the Mickey’s Once Upon a Christmastime Parade. You’ll be able to point out some familiar faces from the parade, such as Jiminy Cricket, Goofy, Winnie-the-Pooh, Tigger and of course, Scrooge McDuck. Oh, and Santa.

You can even get a pre-decorated seasonal in-room celebration, with personalised gifts included!

When: From 1st November to 5th January you can escape to a world of magical wonder.

*We got through this whole article without a single 'winter is coming' or any other kind of Game of Thrones reference – haven't we done well?

6 Reasons to visit Australia this winter

Orlando: Not just for children