What it's Like to Get Engaged and Married at Uluru

When Flight Centre customer Philippa Hyams first travelled to Uluru, she had no idea how significant the destination would become for her. After husband Robert took her by surprise and got down on one knee here after the pair had been together 18 years, the location held so much magic for the couple that they decided to return to Uluru to get married. Here, she shares why the two Australia Journeys they booked have become the most memorable of their lifetime… 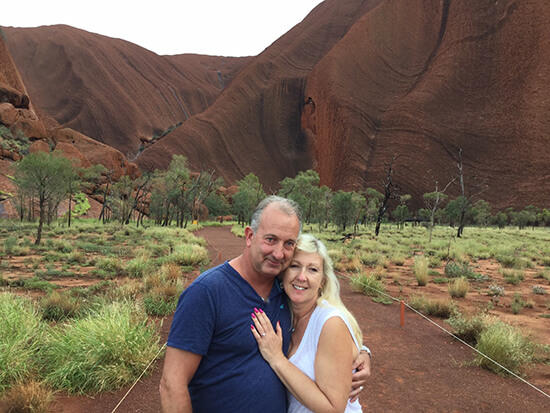 “Robert first went to Australia about 25 years ago and it was somewhere I had thought about, but I never imagined we would get there. But when our Travel Expert Yohan invited us to Flight Centre’s Suitcase Party two years ago, where the prize was a trip to Australia, I decided there and then that I wanted to go and Yohan and I started planning the itinerary.

“We then went on an Escape to Dubai, where, unbeknown to me, Robert purchased an engagement ring and kept it hidden for eight months, waiting for the right moment.

“We finally made it to Australia in February last year. On our final morning, we got up at 5am to go on the sunrise excursion. About halfway through the morning, we reached a clearing with a waterfall and the next thing I knew, Robert was fumbling in his pocket and went down on one knee and asked me to marry him! He produced the beautiful ring, it was so romantic, charming, and very emotional. I obviously said yes! “When we returned home, we discussed various options; we’ve had many a holiday to Miami with Flight Centre and we love Mexico. I joked that we should come back to Australia, but when we thought about it, it just seemed right.

“It was no mean feat organising a wedding for nine people 20,000 miles away, but Yohan worked so hard putting the itinerary together and co-ordinating flights for my son to come from Canada. The day went perfectly, and I cannot describe how magical it was getting married there.

“I even arranged for a fire truck to collect Robert on the morning of the wedding! He has been a London firefighter for 38 years and whenever we go on holiday, we always visit the local fire stations. To Robert’s complete amazement, there was a fire station at the Uluru resort when we got engaged and we spent a couple of hours chatting to the firefighters there, so once we’d decided on the venue, I wrote to them and asked if they would consider surprising Robert. It’s the first time they have been asked to do something like that! 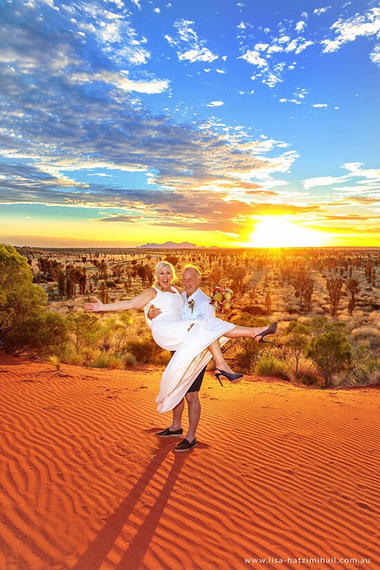 “It was very special for us to go back to the place where Robert proposed, and we got married exactly one year on from the day we got engaged. We have been together for 18 years, so to make this commitment at such a place was incredibly emotional for us with our children and families present.

“The Flight Centre team are fantastic and we know Yohan will always make every effort to get us the best deals without compromising on quality. We would never go anywhere else.”

Travel Expert Yohan Foong, of the Flight Centre Romford store, said: “I was so happy for them both that they wanted to return to Uluru to get married, as I know they had such an awesome time on the trip I booked them. It is such a unique iconic location to get married, I was over the moon that I could make it all happen and the whole family could experience Australia together.”

Planning something special? Pop in-store to meet your very own Travel Expert and start planning your celebratory trip.