5 Things You’ve Got to Do in Namibia

Namibia is a country of unrivalled beauty. Home to stunning mountains, ancient – almost alien – desert landscapes, and, of course, some of the best wildlife-watching opportunities in Southern Africa. It can be hard to know where to begin here, but whatever you do, make sure you cover off these five things to do first: 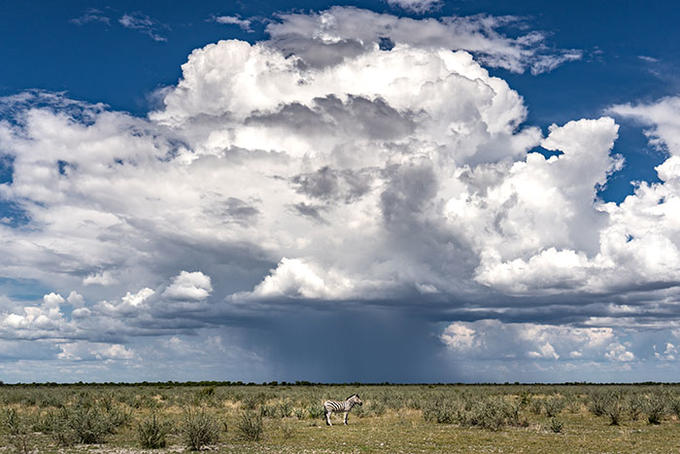 At over 8,600 square miles, Etosha National Park is one of the largest parks in the world. In theory that would mean animal sightings would be scarce, but Etosha's charm lies in the fact that the animals come to you. Park up next to one of the numerous watering holes dotted around the park and wait for the hordes of animals to swing by for a drink. Slight caveat is that this only tends to happen in the dry season. Rainy season leads to fewer waterhole-gatherings because there’s water everywhere, but it does still provide some stunning backdrops for when you’re spotting animals! Game drives in the park can be organised through any of the neighbouring lodges or you can opt for the self-drive option; however, it’s always recommended to go with a guide. In its heyday, Kolmanskop was the absolute lap of luxury, decked out with ballrooms, casinos, theatres, swimming pools, an ice factory, a hospital and even the first X-ray machine in Southern Africa. Twice a day each household would be delivered a giant block of ice, fresh lemonade and their daily allowance of water. Opulent to say the least, but semi-justified given the town's shiny export: diamonds! After the discovery of an "unusually shiny rock" in the area in 1908 people went nuts and Kolmanskop became a diamond boom town for almost 50 years. Unfortunately it all ended after WWII when the price of diamond prices dropped, the precious stones became scarcer and larger diamonds were found further South. By 1958, the town was completely abandoned and left to the mercy of the desert dunes. Fastforward 60 years and it's now an eerie ghost town – not to mention a photographer's dream.

Kolmanskop does have an official opening time of 8am, but if the guards are there they sometimes let you in earlier. Entry tickets are purchased at the gate, which include a tour that is definitely worth doing if you have the time! The Caprivi Strip of north-eastern Namibia might not be easiest place to get to, but it’s worth it if you’re willing to make the trip. Blues and greens dominate the landscape, making for a stark contrast to the yellows and reds of the south. To top it off, it also offers some of the best animal encounters in Namibia, but rather than going on a usual game drive, one of best ways to view wildlife is by floating down the river. Whether you’re looking to spot elephants and hippos wallowing in Bwabwata National Park, or head to the Zambezi River for a bit of bird watching, a sunset cruise is undoubtably the best way to do it. There’s nothing like seeing a selection of Namibia’s impressive wildlife as the sky lights up with a classic Namibian sunset. Most lodges in the Caprivi Strip offer some sort of river cruise, but make sure you do a bit of research if you’re looking to see specific animals. Hike up the tallest dunes in the world

Not only is the Namib Desert one of the oldest deserts in the world, but it also has some of the highest dunes. Sossusvlei National Park in southern Namibia is the obvious choice for desert dunes, and if you’re up for challenge you can even hike up a few of them. Dune 45 apparently has the best view, but Big Daddy is by far the tallest. Understandably, it’s a fairly sandy endeavour and the hikes often take a few hours, but the scenery is stunning and you’re likely to have the whole place to yourself. If you’re planning on doing a few hikes make sure you arrive early as the sun is scorching and the sand gets unpleasantly hot. Doors open around 6:30am. 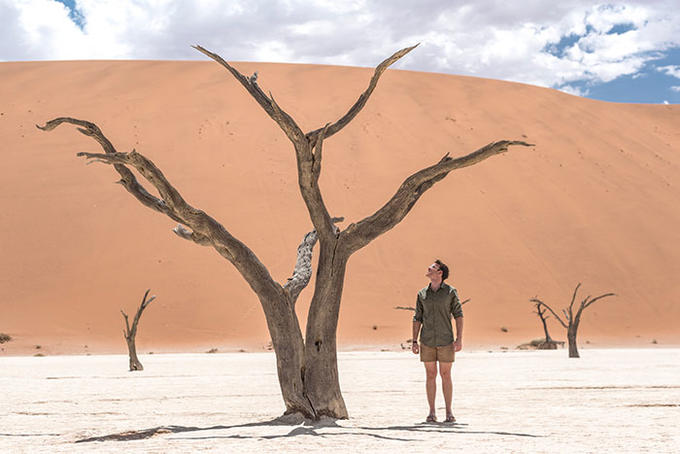 Wander through a Skeleton Forest

Deadvlei, Namibia’s most iconic landscape, is one of the most photographed spots in Southern Africa. The direct translation from Afrikaans is “Dead Marsh” but it’s been a fair few years since this place has been close to marsh-like. Drought and encroaching sand dunes have led to a lifeless valley full of acacia tree skeletons surrounded by towering sandy slopes. If there’s one thing to do in Namibia, this is it. Much like the sand dunes above, Deadvlei sits in Sossusvlei National Park and it gets bloody hot. Wear close-toed shoes if you’re planning to stay past 11am as the sand becomes excruciatingly painful to walk on!

Chat to one of our Travel Experts about booking your African holiday.

Kruger National Park
How to Safari in South Africa with 'As Seen from the Sidecar'
Matt Bishop and Reece Gilkes are two former Flight Centre Travel Experts attempting to complete the first ever circumnavigation of the globe in a scooter with a... Read More »
Africa
An Expert’s Guide to Africa
“From mountain gorillas in Uganda and Rwanda to the great migration across the Masai Mara, this part of the world shows nature at its best.”Tom Grapes is a huge... Read More »
Call:
0208 127 4273 0333 333 2211
Talk to a Travel Expert
Instant call back »We'll call you back for free
X