The Crazy World of Delhi

Seasoned traveller, Jen Lowthrop, reveals some of the best things to do in the crazy city that is Delhi.

India has everything but to the untrained eye can be seen as busy and chaotic city. But oh no, India is so much more and can provide a lifetime of holidays in one trip without ever feeling like you were doing or seeing the same thing twice.

Delhi is often passed over in much the same light, even to India lovers. Mumbai is more commonly the city of choice, but don't let Delhi pass you buy.

Whether it is true Indian culture, western luxuries or the tastiest food in the world, Delhi has it all.

I spent a total of around three weeks in Delhi on and off while I travelled to surrounding areas. It is a great base for much of north India and you can take day trips to must-see places like the Taj Mahal, Fatehpur Sikri and Agra Fort. With a private driver you can do all three of these in a day and still be home for dinner... and it is ALWAYS worth getting back for dinner.

Delhi has everything from 5* cuisine to some of the tastiest street food across the country. Some of my favourites include Aulu Tikki (pomegranate seeds, spices, yoghurt... a concoction of flavours and textures together), chicken tikka kathi rolls (oh my mouth won't stop watering at the thought) and of course hundreds of samosas, bhajis and momos. There is always the chance of getting the famous Delhi Belly, but personally I think it is more likely from drinking the water than eating the food. All things deep fried is sure to have killed anything our tummies won't appreciate, right?!

If you are really craving something western then head to one of the luxury air conditioned malls for a spot of retail therapy and my all time favourite Haagen Dazs Cafe... I am ashamed to admit I had ice cream from here about six times in three weeks, it costs exactly the same as London so don't expect a bargain, but sometimes cravings take over and you just have to break the bank and treat yourself. 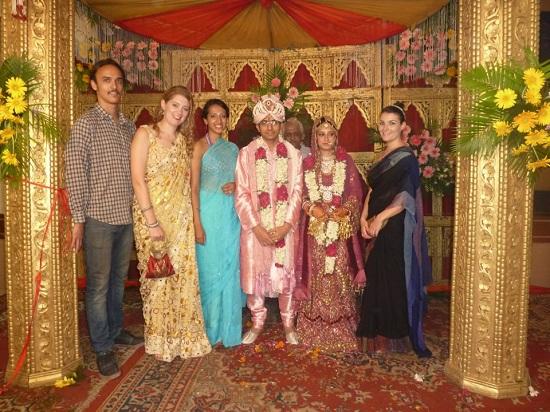 The partying in Delhi is secretly as modern as the rest of the world, behind all the traditionally dressed men and women are young twenty-somethings heading out in their private cars in miniskirts and cropped tops, dancing the night away to a mixture of David Guetta and Bollywood tunes. I really started to love the music in India and when attending an Indian wedding in Delhi found myself doing the moves with the rest of the crowd to the song of the moment, Sheila Ki Jawani by Tees Maar Khan. I bet you will be hooked too after listening a couple of times.

You can get around Delhi fairly easily too, it is BIG, really big but they have a great air conditioned train service (one up on the London Underground) and then hundreds of TukTuks to get you to the exact location you want. Be prepared to bargain though, as a tourist they will try, and probably succeed, in ripping you off.

There are plenty of places to see beyond the high class malls and busy, thriving markets. Like the rest of India there are many, many temples. My favourites were the Lotus Temple, modern and very different to most other temples and the Askhardham Temple, which is quite simply beautiful. I saw my fair share of temples in Delhi, but this one even made me go WOW! I liked the Askhardham more than The Taj Mahal, the detail was exquisite and everything kept immaculately clean and pristine. You weren't allowed to take any cameras or phones in with you, which made taking photographs hard, but meant you weren't distracted but could instead focus on the beauty.

Everyone who visits India should a visit to Delhi and get to know this city, it is more than just a layover, it is the centre of the country and the longer you stay the more secrets you will unfold.

Jen is a freelance blogger and social media expert. She is always looking for the next adventure and her favourite thing to do in any city is wander the streets, stopping at little cafes and chatting to the locals. Jen writes the blog She Gets Around and you can also find her on Facebook and Twitter.