Flight Centre Travel Blog/Tales from the Road in Western Australia

Tales from the Road in Western Australia

A mighty wave, bathed in sunlight, towers above me as I squint up at the brilliant blue sky beyond, writes Helen Ochyra. But it’s not going to come crashing down any time soon. Formed more than 2.7 billion years ago, it’s cast in granite, an ancient formation that’s 15m high and 110m long – and more than 200 miles from the city of Perth, amid the spectacular landscape of the Golden Outback. This is Wave Rock, my first stop on an exhilarating Journey around the southwestern corner of the state of Western Australia.

Far removed from the eastern states, this region has a character all its own. Nowhere is this more apparent than in Kalgoorlie, an original mining town rich in history and surrounded by miles of amber-hued desert. Originally known as Hannan’s Find, after the Irishman who first spotted gold here, the town rushed to fame in the 1880s when thousands of prospectors flocked to its dusty streets. 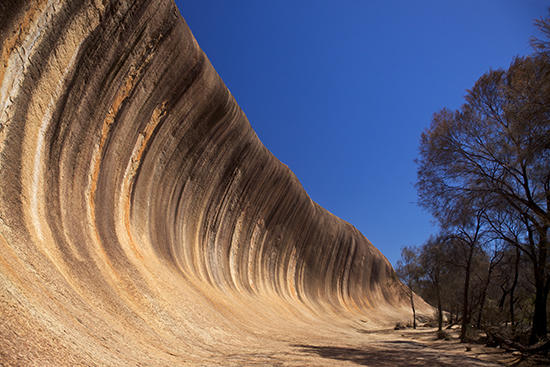 Today, gazing down on Kalgoorlie’s gigantic Super Pit – the largest open-pit gold mine in the country, and one of the most prosperous in the world – is a reminder that the allure of this precious metal hasn’t lost its shine. In town, I take in Hannan Street, lined with lively cafés and bars, and historic hotels with wrought-iron balconies provide a perfect perch for me to watch the bustle below, cold beer in hand. I even tour the last of Hay Street’s original infamous brothels. Poking around the 115-year-old Questa Casa, a working ‘museum’ still open today under current madam Carmel, is an eye-opening experience…

My head abuzz with stories of feather boas, high heels and the time a woman drove her car straight through the joint, I hit the road to head south towards the breezy coastal town of Esperance. A nature lover’s dream, there’s little here besides untouched islands and idyllic white-sand beaches, and that’s the appeal. Locals say Lucky Bay is home to the best, so it’s here that I kick off my flip flops and bury my toes in sand so clean it almost squeaks. 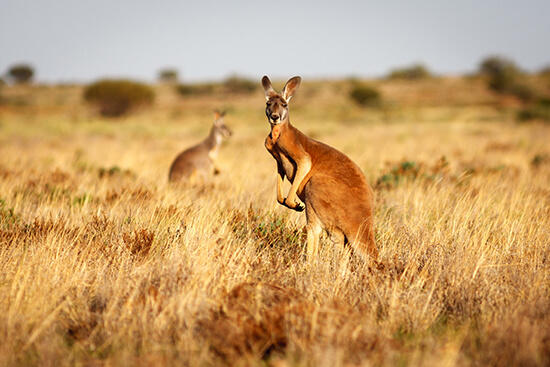 As I stroll along the beach, swept up in the sheer beauty of the archipelago seascape that surrounds me, turquoise waters cooling my feet, I find I’m squeaking myself – in delight at spotting a kangaroo up ahead. I stop in my tracks, worried I might startle it, but this ‘roo is a true blue Aussie, reclining in the sunshine and fixing me with a laid-back gaze that seems to say, ‘G’day’.

From Esperance we travel west, next stop Albany. The landing point for many soon-to-be Aussies in the 19th century, it was Western Australia’s first European settlement. I stand on the deck of the replica brig Amity, which brought the first settlers to this outpost, and imagine being packed on the small vessel with 50 men, livestock and stores. Over at the Old Gaol, I uncover convict stories and ghostly tales.

My favourite day here is spent clambering the emerald peaks of the Stirling Range, finding fields of sunshine-yellow wild flowers and passing through swirls of mist. One of the only places in Australia to see snow, this is a magnificent, verdant landscape, and it’s hard to fathom that it’s part of the same state as the arid desertscapes around Kalgoorlie. 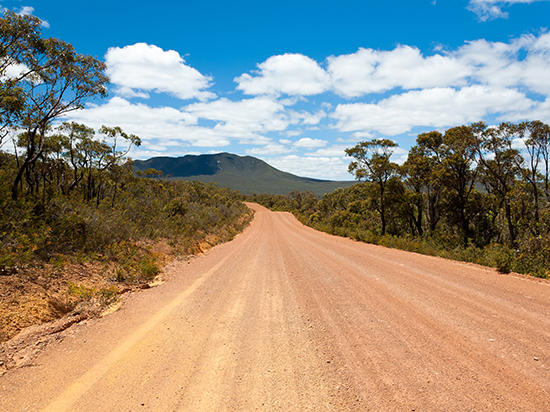 Further west, Gloucester National Park commands the landscape. This towering ancient forest is home to colossal karri trees, their straight, smooth trunks in creamy shades of white, orange, pink and grey soaring skyward. The 61m Gloucester Tree became a bushfire lookout in 1947 and has 153 steel-peg ‘steps’ driven into its trunk; they turn my legs to jelly but the dizzying canopy panorama from the viewing platform is a spectacular reward. Up here, all is green.

My final few days are spent in the state’s far southwest corner, in magical Margaret River. A name familiar to wine-lovers worldwide, it also speaks of craft beers and flavour-filled produce, from local truffles and the freshest crayfish to rich cheeses. I spend a sun-soaked day exploring vineyards, going from tasting to laid-back tasting at welcoming wineries. I’m driven along Caves Road, a tree-lined trail through marching rows of vines, the landscape a rolling carpet of green and golden hues. We turn off to Arimia, a tiny, friendly winery that steals my heart with its fun cellar door tasting and unusual (for the region) Zinfandel. Plenty of wineries dish up a gourmet lunch, too, Arimia included. 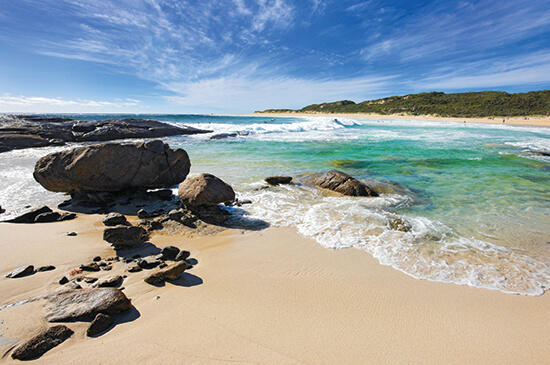 Margaret River is also known for its world-class surfing, so as my Australian adventure nears its end I find myself at the bottom of a wave once more. This time, well taught by the local surf school, I’m ready for the ride. As the water swells, I lift myself up on my board, catch the wave and power back towards the shore. It’s thrilling, exhilarating… another of Western Australia’s many golden moments.

Make an appointment with one of our Travel Experts to chat about our Southwest Highlights Journey – which will take you to Perth, Margaret River and Fremantle, to name a few.

Western Australia
7 Amazing Pictures That Will Make You Want to go to Western Australia
Vast, rugged and peppered with photogenic points of interest, Western Australia is a rewarding place to explore, especially if you’re into photography. With my camera... Read More »
Australia
Why NOW is the Best Time to Book Your Australia Holiday
Australia. The Land Down Under, where you can gaze upon the giant monolith that is Uluru, explore the Great Barrier Reef and come face-to-face with koalas, kangaroos,... Read More »
Call:
0208 127 4273 0333 333 2211
Talk to a Travel Expert
Instant call back »We'll call you back for free
X