Hot in the City: Summer in New York

Emerging from the subway into bright sunlight, I checked my phone to see what the temperature was. 34°C. And that was at street level. Down in the subway, it must have been pushing 40°C. And it was only midday. New York in August was a shock to the senses. I went in search of something cold.

I found just what I needed in Blockheads, a Mexican joint in the East Village where I made the most of the lunchtime special and ordered a chicken burrito accompanied by a frozen sangria. Although the sangria did not stay frozen for long, it was super refreshing, and just what I needed.

Afterwards, I walked back out into the sunshine, took a stroll around the block and, seeing a queue outside Ess-a-Bagel, joined it. Why can’t I have two lunches? This is New York, home of the bagel, after all! I was soon tucking in to a cinnamon and raisin bagel, straight from the oven and spread with what must have been the entire tub of cream cheese with cinnamon and apple. It was without a doubt the best bagel I’ve ever had. 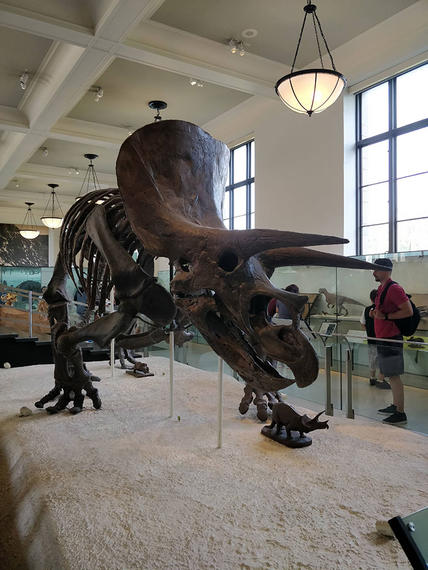 The American Museum of Natural History

Needing to wear off all that food, I set off for the American Museum of Natural History, setting for Ben Stiller’s Night at the Museum movie and, much to my delight, filled with models and samples of some of the world’s most weird and wonderful creatures, including dinosaurs and woolly mammoths. I lapped up the (stuffed) elephants, rhinos and leopards, as well as the refreshing air conditioning in the cool, grand building. Back outside afterwards, I strolled slowly in the sunshine, across Central Park and to the Metropolitan Museum of Art. 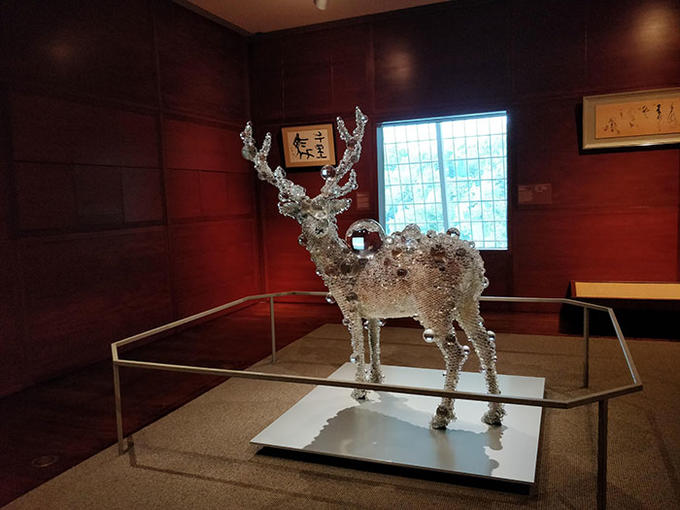 The Metropolitan Museum of Art

Keeping me thoroughly entranced for the rest of the afternoon, I spent many happy hours in the Met, admiring some of the world’s most exquisite works of art, including PixCell-Deer#24 by Kohei Nawa (pictured), a deer made out of crystal balls which glittered colourfully in the sunlight; various Egyptian mummies and, my absolute favourite, the intricate blue tiles that feature prominently in art from across the Islamic world. Feeling suitably cultured back at the hotel, I was delighted to discover that my room booking included not one, but two free glasses of wine, and as I was travelling on my own, I could have them both. Hurrah! I sat on the rooftop and gazed up at the skyscrapers while sipping on nicely chilled Sauvignon Blanc. Bliss. 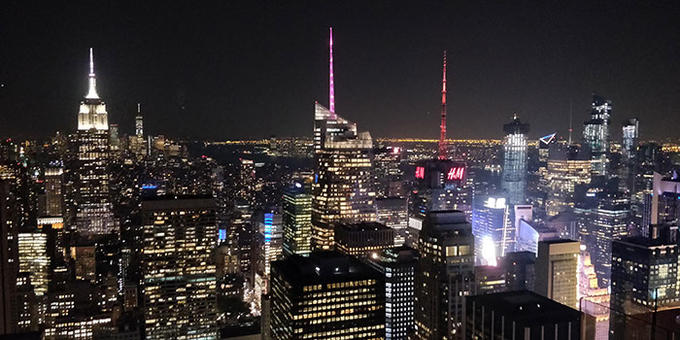 Top of the Rock

As the sun set and the night took the edge off the summer heat, I went for an evening stroll down to the Rockefeller Plaza, where I took the lift to the 67th floor, otherwise known as Top of the Rock. From there, I could see the whole of Manhattan's patchwork of streets out spread before me, the skyscrapers lit up like stars glittering below, the Empire State Building taking pride of place among them. I stayed up there for a couple of hours, enjoying the gentle, warm breeze and appreciating the romance of it all.

The following morning I ascended into the sky again, this time to the One World Observatory at the Freedom Tower. The day was already heating up, despite the early hour, and a haze lay across the city, hiding some of the distant skyline from view. I could still see for miles though, across to the Statue of Liberty, Brooklyn Bridge, up to Queens and the Bronx, as well as both the Hudson and the East Rivers.

As I somehow managed to bypass Chinatown on my first visit to New York a few years prior, I had made up my mind to see it this time. So, back on solid ground after my Freedom Tower ascent, I wandered over to the lanterns, steamed bun shops and the smells of noodles frying. Now I've spent many months in China, and to me, New York’s Chinatown had a real buzz to it; it felt more Chinese than China did! A monastery in Manhattan

By this point, it was still only mid-morning so, with most of the day ahead of me, I headed to The Smith for brunch of smoked salmon and scrambled eggs and a mimosa, before taking the subway beyond the end of Central Park, further than I've ever been before, to Washington Heights in Upper Manhattan, home to The Cloisters. Who knew there was a monastery in Manhattan?

Technically, it’s not just one monastery, but a mishmash of a few, joined together in the 1930s to showcase the Met’s medieval artworks. As I had been to the Met the day before, entry was free, much to my delight. There was a fashion exhibition taking place while I was there, and the modern clothing styles and haunting opera music jarred with the mediaeval-style building. It made for a beguiling atmosphere, especially with the Hudson River glinting in the bright sun just outside the window. I loved it. 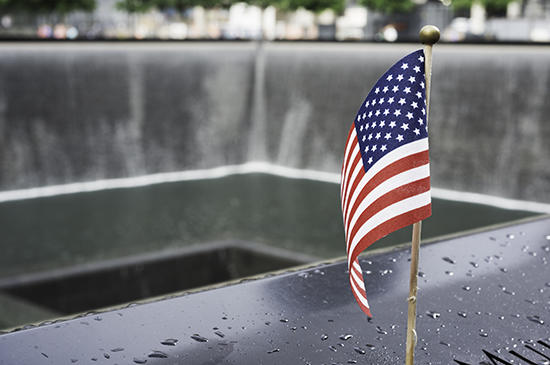 Back in the city, I called in at the 9/11 Memorial Museum. I had been in two minds about visiting; I remember that day in 2001 very clearly, and wasn’t sure if I needed to relive it through a museum. However, I decided to go anyway, and was pleased to find it was more of a tribute than a museum. Still, it was a rather harrowing experience looking at dusty, bloodstained shoes and twisted pieces of building, and I’m not ashamed to say I that cried as I wandered around looking at the exhibits. I finished at the two memorial pools and cried some more, but I was glad I went. On my third and final day in New York, I rode the subway all the way to the end at Coney Island. A place of fairgrounds, hot dogs and pizza, Coney Island was scorching hot underfoot as I strolled along the famous boardwalk, slurping happily on an entire gallon of Diet Coke. As I walked I watched the sunbathers sizzling on the beach and the swimmers splashing in the sea, and heard the joyful screams of the rollercoaster riders whizzing by, although I didn’t go on any rides myself. By now it was time for pizza. I stopped by Grimaldi’s first, which is something of a pizza institution in Brooklyn, and then swung by L&B Spumoni Gardens. Both have been serving up excellent pizza for decades (which you can read more about here), but my favourite was the pizza pie at L&B Spumoni Gardens. I regretted not having a travel buddy at this point as, unable to manage a whole pizza (they are enormous!), I had to order by the slice and was therefore restricted on toppings. Also at L&B Spumoni Gardens I sampled the orange sherbet ice cream, which was wonderfully soft and creamy, although it didn’t last long in the sunshine. Finding myself with a bit of time to kill before leaving for the airport, I decided to pay a visit to the Museum of Modern Art, or MoMA. Being honest, I’m not the world’s biggest fan of modern art, so I went in with some apprehension. I needn’t have worried though, as I loved it there, wandering among some really striking pieces of art. For me, highlights included Van Gogh’s The Starry Night and City Dreams, a collection of miniature cities made entirely of paper by Bodys Isek Kingelez. 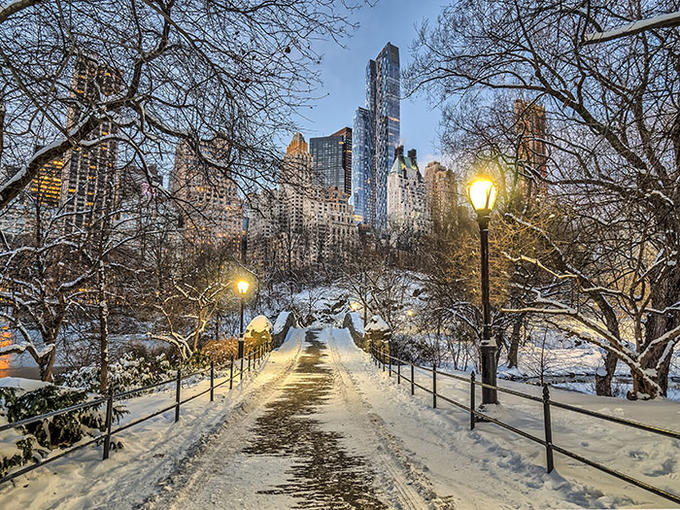 Then, it was time to go. Three days in New York City had flown by. August in the city had been hot, hot, hot, but not unbearable, and had the advantage of the sun, which had shone brightly throughout my visit and given me an 'I've just been on my holidays' glow. Furthermore, not only did the fine weather mean that all attractions were open, but I could wander New York’s parks and pathways happily, and take full advantage of the excellent rooftop dining. Next time I might try going in winter though, just to mix it up.