A full spectrum of attractions within a two-hour radius makes Melbourne the ideal starting point for a road trip in Victoria, says Kathleen Prior... Unsure of what I hoped to find, in my mid-30s I quit my job, put my belongings in storage and flew round the world with a rucksack and my savings. Most of my friends were settling down, but I wanted adventure, so I went Down Under for a road trip starting in Melbourne, Victoria’s state capital. With barely enough time to dump our bags, we were off on our first true Australian experience: an Aussie rules football match at the Melbourne Cricket Ground, the nation’s largest sports stadium. The game spun by in a blur: my understanding of the rules was non-existent, but we wanted the Richmond Tigers – yellow and black – to win, which they did. Hurrah!

A clash of culture and cliché, Melbourne is a city that has it all. Cutting-edge theatre and all the latest culinary hypes, late-night comedy clubs and chilled river cruises. Shaking off jet lag, we set off to the hipster nexus that is Flinders Lane: turn down once-dingy alleys and you’ll find unassuming doorways leading to ultra-cool shops and galleries, and the clusters of street art that have made these laneways famous. To really appreciate the underground art scene, join a guided tour.

On Hosier Lane, tapas bar MoVida serves up contemporary delights in an industrial Art Deco setting: try piquillo peppers stuffed with scallops, or pickled anchovies offset by a tomato sorbet. The area is a shopper’s paradise too, with laneways such as Degraves Street and Centre Place packed with cafés and boutiques. But the item at the top of our wish list was a campervan that would be our home for the next few months. After a few essential pit stops, we had a tankful of diesel and a fridge stacked with ‘goon bags’ of white wine. Considered one of the world’s most beautiful drives, the Great Ocean Road seemed an ideal start. Built after the First World War by returned soldiers and dedicated to those who lost their lives, the road runs along the scenic southern coastline of Victoria, and at 151 miles long, it’s the world’s largest war memorial.

The journey to the eastern end in Torquay is an 80-minute drive from Melbourne – plus an extra hour for our battered old van to cough and splutter her way down the slow lane. From there, the road sweeps along the rugged landscape, with each turn revealing a new vista of the wild Southern Ocean. It takes in some of Victoria’s tourist highlights – the Twelve Apostles is the most famous. These towering limestone stacks are at their best in the golden glow of dawn or dusk when they burn orange and amber, a stark contrast to the frothing cobalt-blue sea. But the erosion that once formed the natural wonder now means that just eight of the monoliths still stand. The most recent to crumble into the sea did so in 2005: it is predicted they will all have disappeared within 200 years.

It was here we first felt the thrill of the open road, and the pleasure of pulling over whenever a scene took our fancy. Apollo Bay was a favourite. Stormy weather churned savage waves leaving serene beaches near deserted: we returned to the van with windswept hair and sea salt still on our lips. The route is dotted with fishing villages, with Port Fairy’s white-washed cottages and stone churches a laid-back treasure. Wander down to the jetty to watch anglers pull in bream and mullet, and if you’re lucky spot a whale breaching out at sea, then sample a fresh catch at gastropub The Hub. 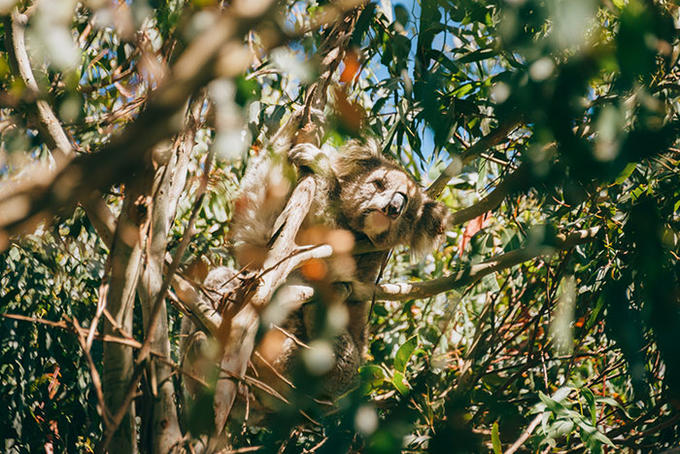 Built in 1848 and known as the Beacon of Hope, the oldest working lighthouse on the Australian mainland is perched on the Cape Otway clifftop – a poignant reminder of why the area is known as shipwreck coast. Climb to the top for sweeping panoramas of the textured canopy of rainforest, interspersed by patches of grasslands, bleached and baked by the sun. Black rocks sear a jagged tear through the scene, where the sea ferociously pounds the shoreline.

Now the Great Otway National Park, the area was once inhabited by the Gadubanud people, who thrived on a diet rich with game and seafood. They avoided contact with the early settlers of the 19th century by retreating into the near-impenetrable rainforest. Explore their ancient plant paradise on a 25m-high treetop walk over the leafy gullies or, for the fearless, a zipline. Streams tumble through the tangle of ferns and mossy twisted trunks, creating waterfalls and natural swimming pools for a much-needed refreshing dip.

Take your time to peer into the branches of the manna gum tree, as you may spot a koala playing peekaboo within the leaves. Despite being listed as a vulnerable species, the animals are abundant in Victoria, and with limited supplies of their diet staple, eucalyptus leaves, they are – quite literally – eating themselves out of house and home.

During our winding meander through the Otway Ranges, as the sun began to melt into the grasslands, a mob of kangaroos appeared on the horizon, silhouetted against a rosy sunset that darkened and bruised behind them. The scene throbbed with Australian charm, the epitome of a road-trip adventure. Phillip Island is a two-hour drive from Melbourne, connected to the mainland by a bridge. The island has a Grand Prix Circuit and is renowned for motor racing. Its surf is regarded as some of the most reliable, and there are plentiful opportunities to swim, sail and dive. But that’s not why most people come…

The idea of a penguin colony living on one of Australia’s sunshine-soaked beaches sounds quite absurd. Yet, the island is home to an estimated 32,000 little penguins. The smallest of all 17 penguin species, they grow to just 33cm tall. Ecotourism project the Penguin Parade provides access to viewing areas: arrive early for a front-row seat, then it’s a two-hour wait for the penguins who appear at dusk. Our crowd waited eagerly, children fractious with excitement – and me not far behind!

Then, with a collective gasp of awe from the visitors, the first penguins begin to scramble to the shore. Some have been fishing out at sea for days. When they return, they wait in the shallows for others to arrive, seeking safety in numbers, before collectively surfing a wave to the beach. Finding their feet, they waddle their way to their burrows in the sand. Some look startled, not sure where to wobble. It’s achingly cute. 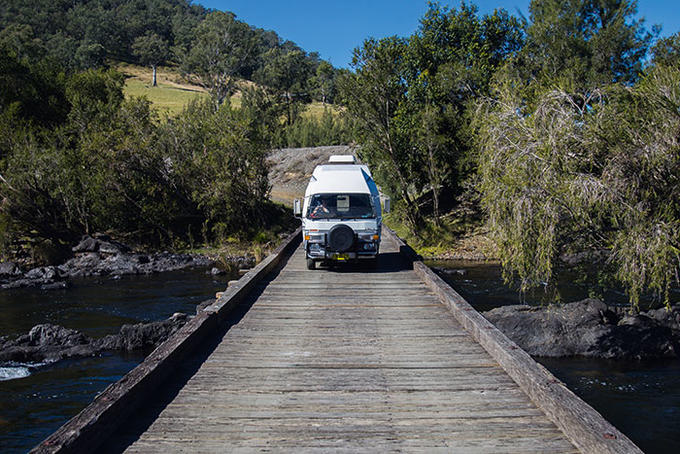 Heading east out of Melbourne, we arrived in Ferntree Gully for the Kokoda Track Memorial Walk, honouring those who fought in Papua New Guinea during the Second World War. I embraced the 1,000 wooden steps, signifying those cut by the army to reach battlefields in the highlands. Nearing the top, I began to regret my decision – the Victorian-era Puffing Billy steam train seemed a better, less strenuous alternative!

Then, a lyrebird scurried across my path. Native to Australia, it’s a national emblem, featuring on the AU$100 bill and the 10-cents coin. Renowned for its extravagant tail feathers, which twirled in the dappled light as it foraged in the undergrowth, it spurred me onwards and upwards.

At 633m, Mount Dandenong is the tallest peak in the Dandenong Ranges, and driving the 18-mile Tourist Road takes you nearly to the top. We stopped en route at the William Ricketts Sanctuary, a tranquil garden filled with statues made by the Australian potter. Scattered among whimsical archways and trickling water features, the sculptures are weaved into overgrown foliage, representing the Aboriginal people’s philosophy of respect for the natural world. The result is a peaceful place of spiritual reflection. 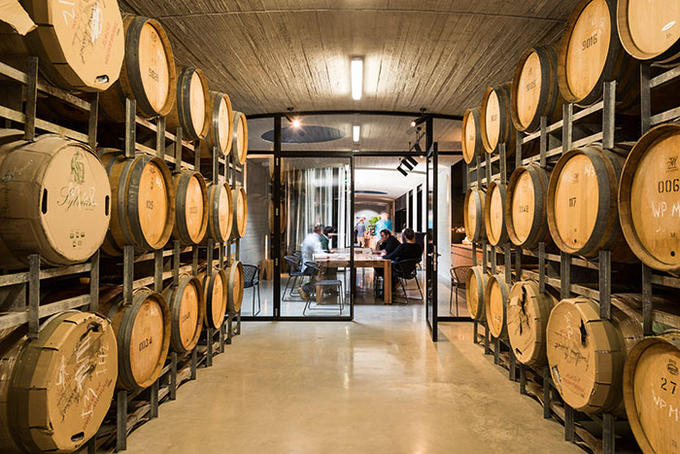 After driving up and over the Dandenongs, we headed into the Yarra Valley, known for its sensational vineyards. One of the best is the TarraWarra Estate, a sleek contemporary winery on more than 980 acres. Our wine-tasting afternoon was hindered as one of us had to drive afterwards: a quick game of Paper, Scissors, Stone designated the driver, and I was forced to spit out delicious Pinot Noirs as my partner grew tipsy.

Nightfall was descending as we hurriedly gathered wood and built a fire at our campground in the Yarra State Forest. Within minutes, we were scoffing kebabs, then toasting marshmallows in the dying embers. Here, we were completely alone, except for the animals in the forest who chirped and cawed a cacophony. In the absolute darkness, the secluded spot became prime star-gazing territory. We lay on our backs and watched the night sky swirl, the Southern Hemisphere showcasing unfamiliar yet mesmeric stellar constellations.

I never knew what I was seeking when I escaped the monotony and routine of my life in London. But I realised right then that I had found it...

Start planning your trip to Melbourne with a little help from our range of Australia holidays.

Melbourne
Take the Scenic Route from Melbourne
While Sydney boasts Australia’s most recognisable cityscape, Melbourne has quietly fostered its most sophisticated cultural scene, with a vibrant lifestyle that has... Read More »
Melbourne
Around Melbourne in 6 Restaurants
Contrary to popular Australian clichés, Australian food is more than just ‘shrimp on the barbie’ and Tim Tams. It's farm to table restaurants, multicultural fusion,... Read More »
Call:
0800 587 0058 0333 333 2211
Talk to a Travel Expert
Instant call back »We'll call you back for free
X