Philadelphia: You’ll fall in love with the city’s murals

Amongst couples, Suzanne Bearne sees a more romantic side to Philadelphia on the Love Letter Train Tour.

They say two’s company and three’s a crowd. But how about when you’re the only singleton on your tour group of four couples? And you’re visiting a set of murals showing a love letter in West Philadelphia? It’s up there with dining solo in a restaurant on Valentine’s Day.

But I put my reservations to one side as our guide, Mary Rastatter, leads us to a packed train on the 8th St Station on the Market-Frankford Line. She tells us that thanks to the city’s Mural Arts Program, set up by muralist Jane Golden in 1984 to provide constructive projects for young graffiti artists, Philadelphia ain’t just the land of cheesesteaks - it’s now known as the city of murals. On the Love Letter Train Tour we'll see one of these projects - a set of 50 murals collectively depicting a love letter from a guy to a girl along the walls and rooftops of the Market/Frankford elevated train line. 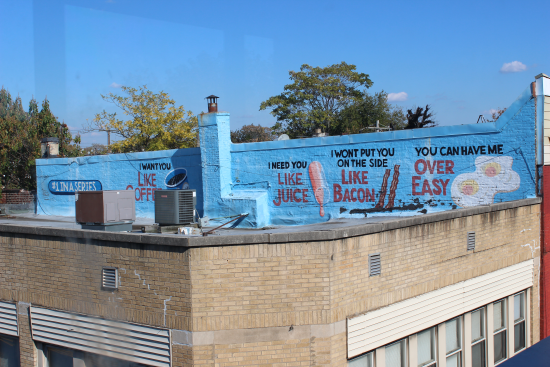 Squashed on the carriage with locals and, of course, my fellow group of twentysomething couples, Mary tells us to get our cameras at the ready before she starts pointing out murals as the train passes along the line. Our heads spin right and left as we fly past murals. I do glimpse a few such as ‘See me like I see you…Beautiful’. But to tell you the truth, we’re moving so fast I miss most of them.

However, within minutes we jump off at 52nd Street and stand outside on the platform as Mary points out the various cryptic love notes, splashed brightly on urban backdrops like warehouses, houses and shops in West Philly (as the locals call it). On the platform we see a mural with the words ‘This love is real so dinner is on me’ painted in green - oddly placed next to a Jamaican meat patty. Many of the murals have a connection with the place, such as the mural painted in red bold letters reading ‘Meet me on Fifty Second if only for fifty seconds’.

I ask Mary if the murals are set out in a particular order but she says they don’t spell out one sequential message. Rather, she says, it’s just a fictional, jumbled set of love notes from a boy to his unrequited love – all set along the walls and rooftops of the Market/Frankford elevated train line to catch the eyes of his beloved who rides the line through West Philadelphia every day. Mary tells us that this major love note project was dreamt up by Philadelphia-born artist Steve Powers and involved 20 spray painters and a whopping 1200 cans of spray paint. 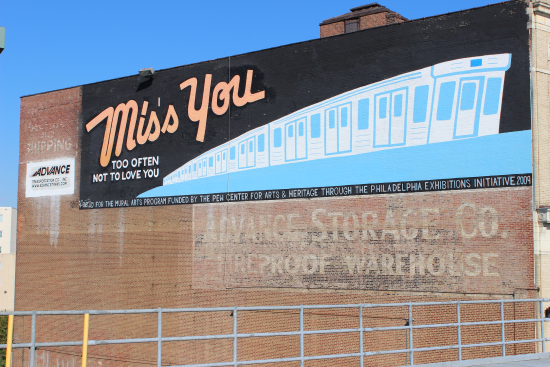 As affectionate and rather more soul-stirring messages such as ‘Miss you too often not to love you’ and ‘Open your eyes see the sunrise’ make us smile and prompt a wave of arms-wrapped-around-each-other photo opportunities for the couples, I quietly ask Mary if the tour usually just comprises of couples. She grins. “Yeah, I mean it’s popular with couples but we do get a few people coming on their own or a mother and daughter coming along.” I think she’s trying to make me feel better.

Mary tells us that when the owner of a camera store was approached by the program to see if they could create a mural on the side of the building, owner Mr Lee asked: “Sure, can you put a camera up there?” The result is a mural that reads, ‘Picture you, picture me, picture this’, and includes an image of a digital camera.

Against a residential wall we see a colourful assortment of jumbled up letters, which spell out Michael Jackson – as a kind of tribute to the artist who died when the murals were being created. On the same wall, just a few metres away, is ‘If you were here Id be home now’ [sic] spelt out like fridge magnets on a white background. Some murals show that the boy's feelings aren’t all rosy. One shows friction emerging within the relationship, with ‘I got the butter I got the bread I got the milk I got the blame’. 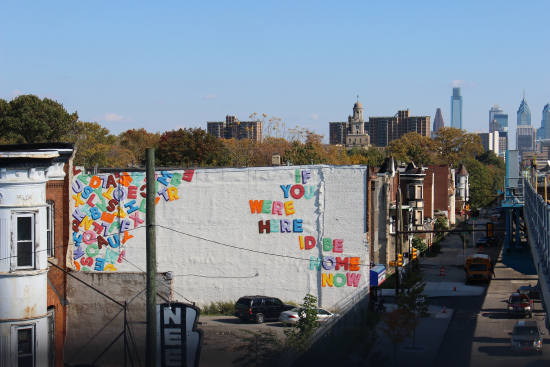 However, as we finish up the one-and-a-half hour tour, it’s obvious that the murals have sparked a dash of romance in the air. There’s lots of handholding and gazing into each other’s eyes amongst the couples, showing that the tour has brought love from the walls to the streets of Philadelphia. Let’s hope that they have better luck than this unrequited love.

The Love Letter Train Tour runs every Saturday and Sunday. Tickets cost $20 (£13) and must be booked in advance. To book or for more information, visit www.muralarts.org

Visit with our Philadelphia Holidays.

Suzanne Bearne is a freelance journalist specialising in retail, fashion, small businesses and travel. She’s also a travel blogger and can be found blogging at www.suzannebearne.com and tweeting at @sbearne.