Mauritius: Beyond the Beaches

The beaches of Mauritius are beautiful and undoubtedly worthy of thorough exploration. In fact, there are few better places in the world where you can revel on soft, shimmering sands. That said, on a recent trip to the Indian Ocean isle, I discovered that there is so much more to it than sun-soaked stretches of silica… 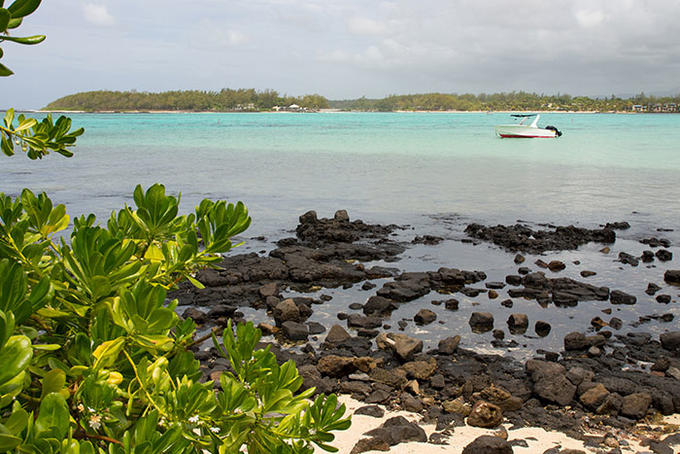 To ease you into post-beach exploration let’s begin as close to the beach as possible: the sea. The Indian Ocean is a vast expanse of blue which surrounds the island for hundreds of miles, shaping it both physically and culturally. It would be a heinous crime to visit without exploring it and the abundant marine life within it.

Perhaps the best introduction to the big blue is snorkelling. Thankfully it’s easy to arrange – it’s likely you can do it through your hotel – and even easier to do as the island is almost entirely protected by coral reefs. Float face down in the calm, clear waters of some of the most famous spots such as Blue Bay Marine Park, Pointe aux Piments or Trou aux Biches and spot some of the most colourful marine species around. Keep your eyes peeled for turtles!

If you like your marine life a little larger and don’t mind not being able to see the bottom then visit Tamarin Bay and tick off an item that features on the majority of bucket lists – swimming with wild dolphins! There is a large pod which calls this bay, at the southwestern tip of Mauritius, home, and if you’re lucky you’ll get to share the water with them.

For those who are looking for a real adrenaline rush you can scuba dive at various sites around the island. The best place to get below the waves is to the north; although the ride out can get quite bumpy, the diving off Round Island is certainly worth it. Here you can spot reef sharks, rays and schools of giant trevally fish.

It doesn’t matter how you chose to explore the ocean, just make sure that you do!

The food and drink

The island has benefited from an influx of different residents from all corners of the world and with them they have brought a range of unique cuisines. Almost Caribbean in flavour-profile, the island serves up myriad dishes which are delicately rather than overpoweringly spiced, and packed with fresh ingredients. And, as you would expect, there’s no shortage of dishes from the Indian Ocean. It’s possible to dine on delicacies such as swordfish, tuna and prawns so large they may as well be lobsters.

To accompany the islands plated delights comes a plethora of drinks. Mauritius is famous for its ‘cocktails on the beach’ vibe and certainly doesn’t disappoint. Again, the island seems to have succumbed to the influence of the Caribbean: rum is the tipple of choice. The liquor is distilled on the island using the plentiful sugar cane resources – the Rhumerie de Chamarel is one such distillery that doubles as a museum and tasting facility. It is well worth a visit, with friendly staff explaining the production process and guiding you through a surprisingly large tasting session. 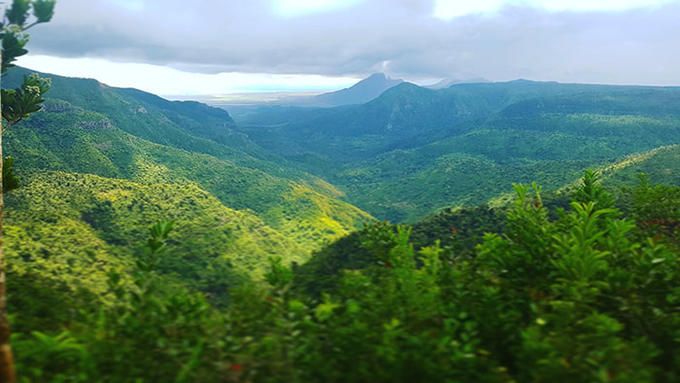 Having been formed by cooling lava from underwater volcanoes, Mauritius surprises many with the volcanic grandeur of its interior. The whole island is formed around a central plateau which is about 600 metres above sea level. Surrounding this plateau is a ring of jagged mountains, offering astounding vistas of the island. You can choose to hike through them or arrange a tour to drive you around them, stopping to take in the most picturesque peaks.

Arguably the most breathtaking viewpoint is that of Black River Gorge in the national park of the same moniker. The forested mountain range falls away to the valley carved by the Black River – so called due to the dense foliage that covers it – and opens up all the way to the Indian Ocean.

Whilst it shouldn’t technically come under the header of ‘the mountains’ it would be remiss of me to mention so much geology without mentioning the Seven Coloured Earths. This phenomenon in the Chamarel plains is a unique patch of dunes where the earth has bonded together into seven distinct colours (red, brown, violet, green, blue, purple and yellow). It is a truly striking sight. 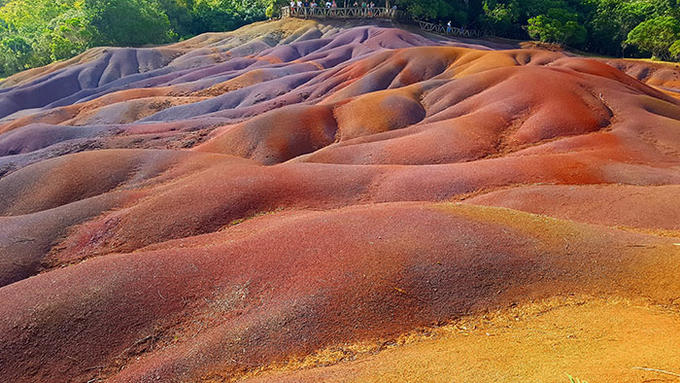 If the natural beauty of the land and sea from ground level aren’t enough for you, I challenge you not to be blown away by the beauty of this country from above. From a couple of hundred of metres up in the air you can appreciate the unique features of this island including the aforementioned reef that hems in almost the entire coastline.

From your privileged vantage point you can see the stark contrast between the light turquoises and vivid greens which dominate the interior of the reef and the deep blue hues on the outside of the reef, signalling the beginning of the ocean.

The best way to see this is from a seaplane which, as it isn’t tied to a runway, can pick you up from outside your hotel if allowed. 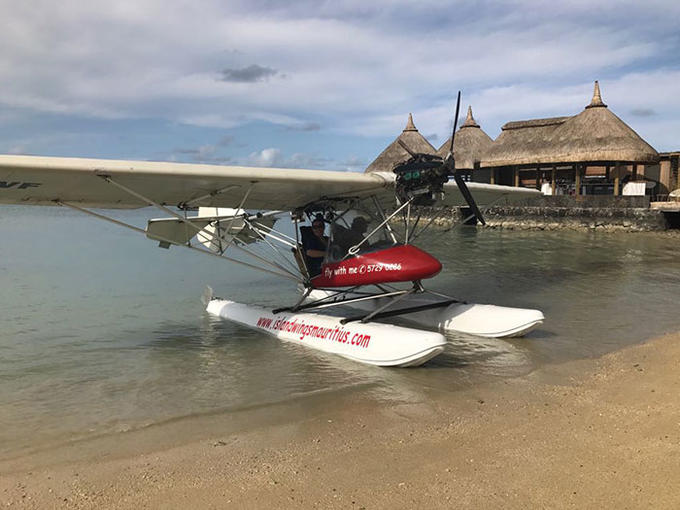 Finally, as alluded to previously, this island benefits from inhabitants from all corners of the globe and, far from clashing or homogenizing the culture of Mauritius, they have created a cultural milieu in which Christian churches sit peacefully next to mosques and across the road from Hindu temples.

Make sure that you don’t miss the biggest statue of the Hindu goddess Durga in the world, which sits in the peaceful, forested highlands of the Black River Gorges National Park, next to the sacred Grand Bassin Lake. Here, travellers are welcomed to capture a slice of Hinduism, observing as the locals make offerings of fruits and incense sticks to the gods. If you are lucky enough to visit during March or February you may see the largest pilgrimage on the island, during which up to 400,000 people make their way to the holy lake.

Feeling inspired? Find out more about our Mauritius holidays.

I work in the online marketing department at Flight Centre and am passionate about inspiring others to take the leap to travel. I love exploring the natural world - whether it’s under the waves, up mountain peaks or down in the dirt!

Indian Ocean
The Indian Ocean Compared: Maldives, Mauritius and Seychelles
As predicaments go, choosing between the Maldives, Mauritius and the Seychelles is a pretty nice one to be faced with. But deciding which Indian Ocean island suits you... Read More »
Indian Ocean
4 Things You Need to Know About Mauritius
Mark Twain once said: “Mauritius was made first, and then heaven; and that heaven was copied from Mauritius.”It was easy to see what he was talking about when I... Read More »
Call:
0208 127 4273 0333 333 2211
Talk to a Travel Expert
Instant call back »We'll call you back for free
X