Here at Flight Centre we meet so many interesting people who have incredible adventures all over the world and we thought it was time to start sharing their experiences. We've been chatting to Michelle Richards who travelled around Thailand for six weeks with her two children. she's told us all about her amazing holiday and her advice for anyone else travelling with children.

Hi Michelle! Can you tell us about your trip to Thailand?

We travelled around Thailand for six weeks.  This comprised of three weeks on the Samui Sister beaches, two weeks trekking around the mountains surrounding Chiang Mai and a week to see Bangkok and its surrounding regions such as the River Kwai, the Grand Palace, see the tigers and the city itself.

What motivated you to take this trip with your children?

I was off work following surgery and also had 10 weeks of school holiday to entertain children (aged 9 and 11).  I’m an ardent traveller and have always hoped that my children will experience the accessibility, passion and unparalleled beauty of the world.  I read recently that travel is one of life's costs that can only make you richer.

What made you choose Thailand for your destination?

I wanted us all to have varied experiences.  Both children enjoy swimming, but either one child or the other likes walking and trekking, adventure and photography.  I hunted on the internet for beautiful locations and Thailand kept popping up.  The beauty of the west coast with those stunning limestone cliffs was alluring. My travel specialist, Sam, suggested that given we were travelling in rainy season I should consider the gulf side and he included ways of accessing the mountains in the north, with island hopping in the south to give us the variety that I sought. 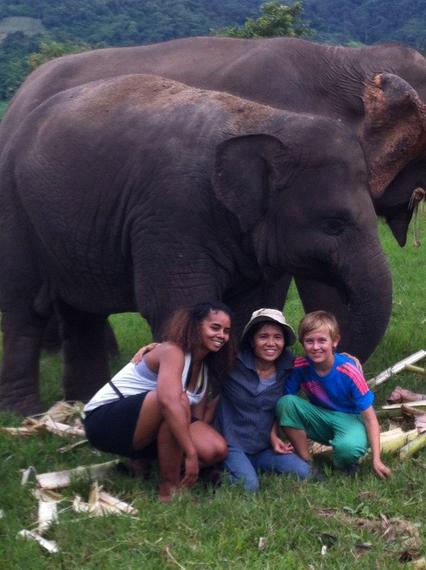 What advice would you give to people travelling to Thailand with children?

I was lucky and found the most amazing travel specialist at Flight Centre called Sam Revell who happened to be well travelled in Thailand and South East Asia. I must have been an absolute nightmare as the options were limitless and I juggled multiple itinerary options. He had a very rough task of consolidating and separating dreams from achievability.  Having never travelled extensively with children in multiple environments I needed excellent advice. The budget also had to be continually weighed and he suggested reducing costs by using other forms of transport such as overnight trains as an alternative to air travel to reach the northern provinces.

What advice would you give to parents who want to travel alone with their children?

You have to imagine your children in all of the various environments.  I knew the overnight train might be a big ask for my 9 year old so I gave her small tasks so the experience became an adventure.  She was tasked with writing about other passengers.

I hadn’t anticipated how they would feel about the torrents of rain whilst trekking which became very stressful.  The travel specialist suggested an ebb and flow to the itinerary so a hard trek would be followed by luxury accommodation.  Even in Bangkok which I thought could potentially be quite dull for the children the travel consultant played to the kids enjoyment and sought unusual features to stay in such as roof pools.

Did you have any initial worries before you went and how did you overcome them once you got there?

Safety was my biggest worry as South East Asia is an unknown for me.  I worried about my son who has extensive food allergies but this turned out to be fine.  Keeping the children occupied particularly on long journeys was overcome by travelling at night whereby they slept on a couchette and this saved on a hotel bill.

What was the highlight from your trip?

The trekking around Chiang Mai region and staying with the hill tribes as part of their extended family.  Although watching my son learn how to catch rats wasn’t entirely comfortable.  A close second would be the stunning beauty of the coastline around Koh Phangan or our visit to River Kwai and the museum.

What was the highlight for your children?

I organised for them to be volunteers at the Elephant Nature Park, a conservation project, and this was a hit with my son.  They were involved with feeding, washing the elephants and helping with the nightly food delivery from the back of a truck.  He fell in love with these majestic animals and was moved by each elephant’s story.  He also got to meet the elephant's ‘saviour’, a tiny woman known as Lek.

My daughter’s favourite experiences were the Thai massages, the summit of a walk, closely followed by the end of a trek and definitely the beaches.

Did you come across any difficulties on your trip and if so, how did you overcome them?

I think with careful planning we avoided many pitfalls.  Our main error was that we booked a trip for six weeks as we thought we might be heading to Borneo.  All Thailand holiday visas have to be renewed after four weeks with a border crossing which wasn’t really feasible so eventually we paid extra and had a visa for the whole time organised in England.

We were very lucky with our health.  We continually watched hygiene, had vaccinations updated and were sensible.  We ate very cheaply on beaches of an evening and rarely went to expensive restaurants.  Our travel consultant had managed to get us great deals on hotels with breakfast included and this became the 'stock up' for the day.

And finally, are you planning your next adventure? If so, where will you go?

If you'd like any more information about travelling to Thailand, you can email Sam Revell who was Michelle's travel consultant - sam.revell@flightcentre.co.uk

You can also take a look at our Cathay Pacific Asia sale for great prices on flights all over Asia.