Having Lunch on the World’s Most Active Volcano

Cat Mills tells us about her adventurous trip to Sicily which ended in an erupting surprise. 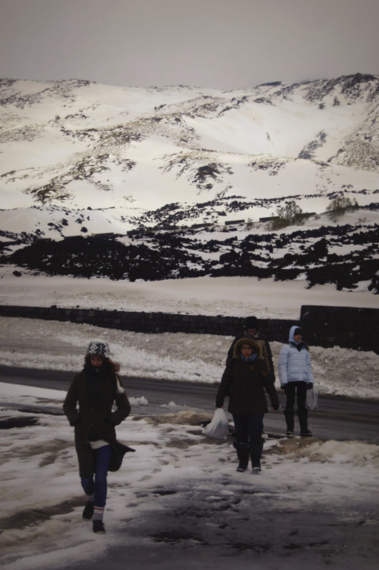 If you would have told me one year ago that I would stand and watch Mount Etna erupt, I would probably have laughed at you.  It’s not something I could have predicted, but it was such an incredible adventure that I would jump at the opportunity to do it again.

Mount Etna is one of the world’s most active volcanoes.  In fact, Etna has been continuously erupting for 3,500 years. It’s the longest recorded erupting volcano, and is only second to Kilauea Volcano in Hawaii for the busiest body of fiery rock.  Mount Etna has a rich history, largely of erupting and wiping out nearby towns - one of which being Nicolosi, where some friends and I stayed for a weekend break. Nicolosi was hit by the eruption in 1669, killing 1,500 people.

Needless to say, we didn’t have such an unfortunate time there. Our stay in Nicolosi was relaxing and fun, exactly what a weekend break should be. This small Sicilian town, with a population of around 5,000 people, is located just below Mount Etna and is the perfect destination for a weekend escape.  You can get to Nicolosi via bus from Catania Airport, though having a car will definitely give you a leg up on transport options.

It was late at night when we arrived in the peaceful mountain town.  Our maps were proving to be more complicated than expected and the cool breeze and hard rain was making us all feel a bit downtrodden.  We were deliriously happy when we arrived at the door of our B&B, a cosy 3 story family house that had warm rooms and dry towels.  Bringing out the fresh cheeses and cheap bottles of red wine we picked up at the shop, we had a toast to our weekend away.

The next morning we donned our warmest clothes and set out for Mount Etna, which is accessible via car or by a shuttle bus that leaves daily from the town centre.  I hadn’t realized that the ascent would be quite so steep, though I really should have; Etna has a circumference of 93 miles and is 10,900 feet tall.  The altitude sickness I was experiencing was short lived, and despite it I couldn’t take my eyes off of what we were seeing; we were making our way up a black and white volcano.  Craters dotted the landscape as the bus crunched up the mountain, tires crushing bits of frail black rock.

As we got our bearings and stood on wobbling legs outside of the bus, we took in the scene.  The mountain was mostly white, but with jagged bits of black rock sticking out.  It was March and we were approaching the end of the skiing season, but the conditions didn’t look promising.  The wind was severed and the ski lifts were closed.  We headed into the small diner on the mountain to discuss our backup plan. 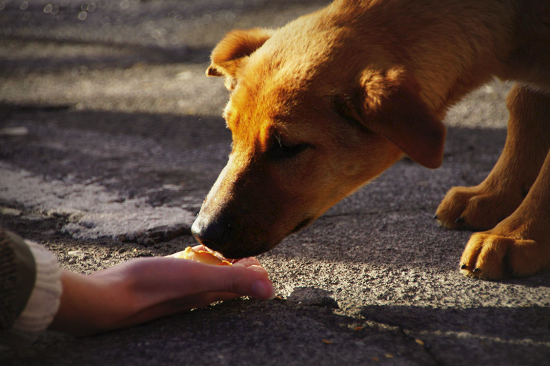 Families nibbled on plates of chips nearby as we drank hot coffees, ate some breaded chicken and potato and evaluated our options.  It was then that we were acutely aware of being watched.  Outside the glass door were four small puppies, eyeing us and our food with big dark eyes. They were part of the feral dog pack that lived on the top of the mountain, wandering the parking lots for scraps of food.  We fed them some potatoes and started our descent; deciding that we would see what was going on a bit further down the road as we had heard there was snowshoeing and cross-country skiing nearby. 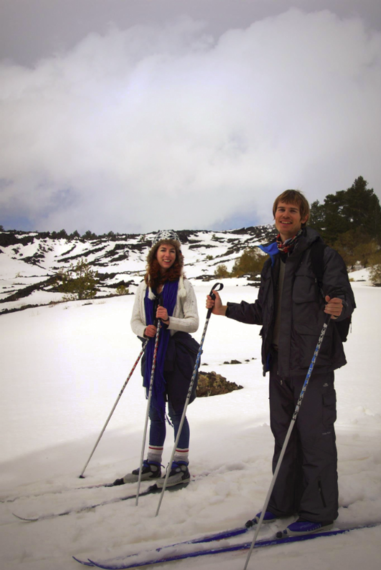 The long and winding road was somewhat treacherous as we faced off against the cold and merciless wind. Taking a shortcut down the hill, crunching black volcanic rock under our boots, we spotted a dozen people cross-country skiing.  Skis, snowshoes and private tours can be rented through a small wooden cabin in this area.  Sitting next to the wood burning stove, we strapped on our boots, clicked into our cross-country skis and slid out on the white gold.  We were forced to peel off extra layers and leave them in the cabin, thanks to the emerging sun that was warming everything in our path, helping to make the snow that much stickier.  The last time I cross country skied I was 9 years old in Montreal and found the experience to be numbingly cold and a touch boring.  As an adult I completely loved it, enjoying the exercise, fresh air, speed and adventurous aspect of it. All I was missing were some husky dogs and a flask of whisky in my pocket. 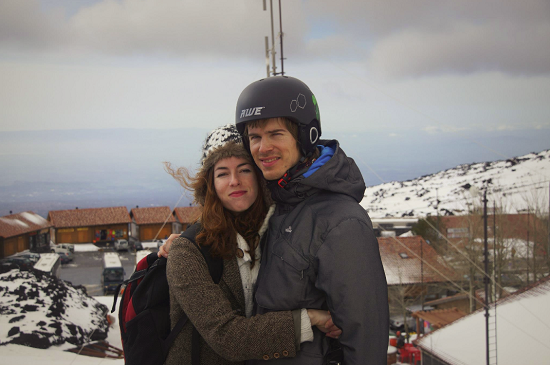 Nico, our super friendly blue-eyed tour guide, kindly packed us into his jeep and spared us the journey back to the top of Etna for us to catch our bus.  We said goodbye to Etna for the day and fell asleep in pools of light on the bus ride back to Nicolosi.

While we might have thought that we were done with Mount Etna, she wasn’t done with us. As we wandered across town to find a restaurant, we spotted someone in the main square pointing towards the volcano.  This was clearly a tourist as none of the locals even bothered to look up.  Mount Etna was erupting!  Hot magma was shooting out of her top, miles high.  We stood in awe and trembling excitement as she continued to blow, filling the nights’ sky with a warm red light.  Lucky for us it hadn’t been erupting a mere four hours earlier when we were still atop the volcano.  After 20 minutes of jittery excitement, we shook ourselves out of our stupor and found our restaurant; an old olive press located down a side street that served incredible local delicacies.  With a bottle of house red wine, we toasted the temperamental volcano for making our trip a truly adventurous one…and for not wiping out the town for a second time.

If you'd like to see more from Cat, you can find her at Wicked and Weird Around the World and also on Twitter.