Marcus Sherifi from Gapyear.com explains why you should visit the Gold Coast and how you can get there for free…

The Gold Coast has quite a striking name, doesn’t it? I mean, what evokes images of white, sandy beaches more than a coast that’s made of gold.

I was attracted by the name and I immediately fell in love with the place. No other location along the east coast of Australia is quite like it. The pace of life seems a little slower in the day, yet a little quicker by night. People surf by day; people party by night; and there’s plenty of opportunity to do both.

Surfers Paradise is a great place to learn to surf and there are a number of surf schools to choose from, teaching you the basics and getting you to stand-up on a wave or two. 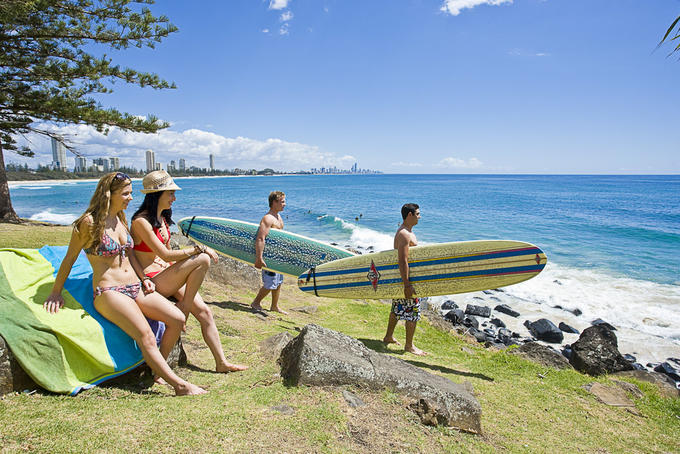 If you’re looking for other surf spots then there are a few around the area. I was already a pro by this point of my trip to Australia (I say pro, I mean I could wobble along a wave without looking like a complete novice – saying that, I was a pro when it came to carrying a board…) and I headed just down the coast to Coolangatta.

I remember catching a perfect wave while surfing there. A lovely 3m right-handed barrel that just went on and on and on. It was bliss and I felt like Keanu Reeves in Point Break (old school reference there).

After that perfect wave I hit the CBD (that’s the central business district in case you were wondering) and sat outside in the evening sun, 25oC, with a beer in hand. Where else in the world can you do that?

And as for night life… wow. I loved partying in the Gold Coast. I was staying at Komune Backpackers at the time and every night a group of us went out, bonding over a few beers and getting caught up in the glitz and glamour of the Gold Coast.

But I don’t want you to think its just surf and turf in the Gold Coast. There’s more to it than that. The Gold Coast is actually home to the world’s largest subtropical rainforest and I really recommend making the trip in-land.

I stayed in a little log cabin (backpacking style) right in the heart of the forest of Lamington National Park and kicked back for a few days. It sounds really cheesy but we sat around a campfire singing songs every night (thankfully not Kumbayah). It was simple, but it was amazing.

So, now that I’ve got you interested in the Gold Coast, I’m going to tell you how you can get there for free.

Gapyear.com has launched a new competition in conjunction with Gold Coast Tourism and Qantas called ‘I’m A Backpacker… Get Me In Here!’ that’s sending six winners to the Gold Coast for free.

The competition is like ‘I’m A Celebrity… Get Me In Here’ with contestants competing against each other in ‘bush tucker trails’ to become the ‘Backpacker King or Queen of the Jungle’.

There’ll be a film crew tracking the movements of the backpackers and following the bush tucker trials. Whoever wins the crown of ‘Backpacker King or Queen of the Jungle’ will win a mysterious grand prize.

The six entrants will be flying from the UK to the Gold Coast courtesy of Qantas. Once in Australia, they’ll be staying at the famous Palazzo Versace Hotel where they’ll be wined and dined. It’s the same hotel where the ITV celebrities stay when not in the jungle on ‘I’m A Celebrity’. When not in hotel, the six contestants can soak up the sun on Surfers Paradise or catch a wave at Coolangatta. After staying in the Palazzo Versace Hotel for a night, the six contestants will be whisked off to the jungle to compete in ‘I’m A Backpacker… Get Me In Here!’.

To enter ‘I’m A Backpacker… Get Me In Here!’ you need to create a one-minute video explaining why you’ve got what it takes to win. Videos can be funny, sad, weird or whatever you want them to be. The six entrants with the most ‘Likes’ on our YouTube channel will be the winners and will fly to the Gold Coast for free, so make sure you share your videos on all social networks and get people to 'Like' your video.

We created an example video for the competition as an outline of what we’re looking for.