The Grand Canyon: A Big Statement for Nature to Make

Route 66. The Mother Road. The Main Street of America.

Just a few hours after leaving Las Vegas, we were cruising down this legendary highway, heading to Seligman, Arizona, for what would be the first stop on our three-day tour of the Southwest’s incredible national parks. 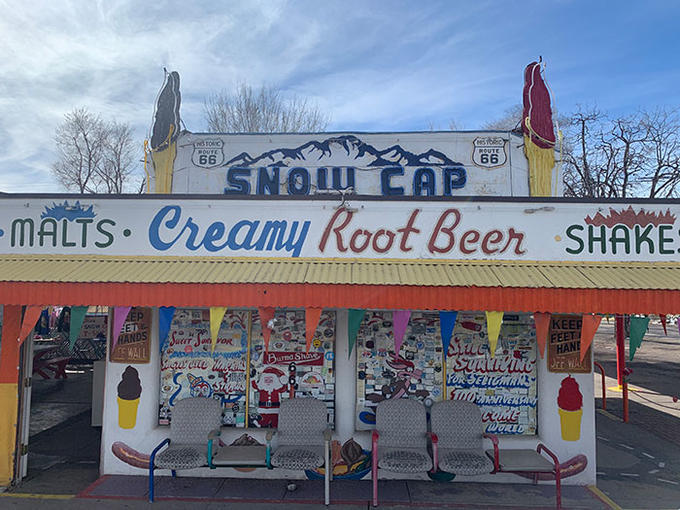 Now known as the birthplace of Historic Route 66, as we arrived in Seligman we were greeted first by the wacky exterior of the Snow Cap grill. Here neon and painted signs compete to extol the virtues of the diner and its unusual offerings, from “creamy root beer” to “dead chicken” and “slightly used napkins”. It’s just one of many quirky stores and roadside motels that call this place home, all crazily decorated with every kind of Route 66 paraphernalia and motoring sign imaginable, along with a large collection of classic trucks and cars in various states of disrepair. It made for an entertaining lunch break as we made our way to today’s real highlight – the Grand Canyon. 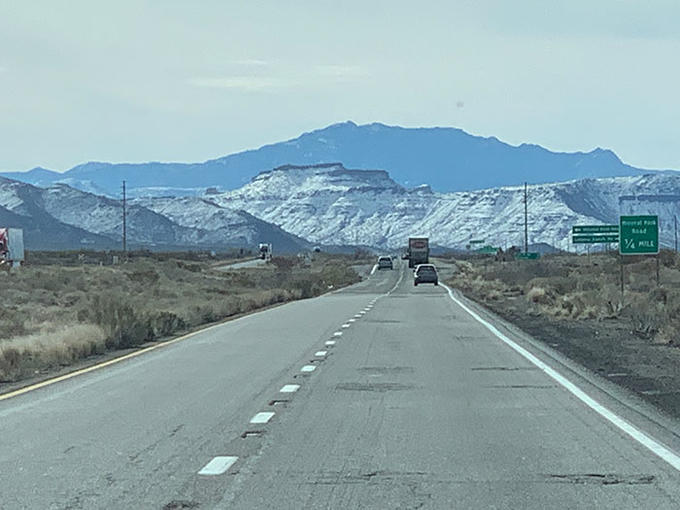 Back on the road, Joel Clark, our encyclopaedic Bindlestiff Tours guide, brought us up to speed on the history and geology of the region. He regaled us with how the Paiute Indians evocatively call the Grand Canyon “kaibab”, meaning mountain lying down, before casually revealing - among many other fascinating facts and figures - that the Swiss Alps could comfortably fit in the considerable cavity.

“When you see the Grand Canyon, you might be lost for words and you just have to drink it in,” Joel said, before quoting John Muir, who having previously seen the majestic Yosemite valley, said of the Grand Canyon: “It’s a big statement even for nature to make.” 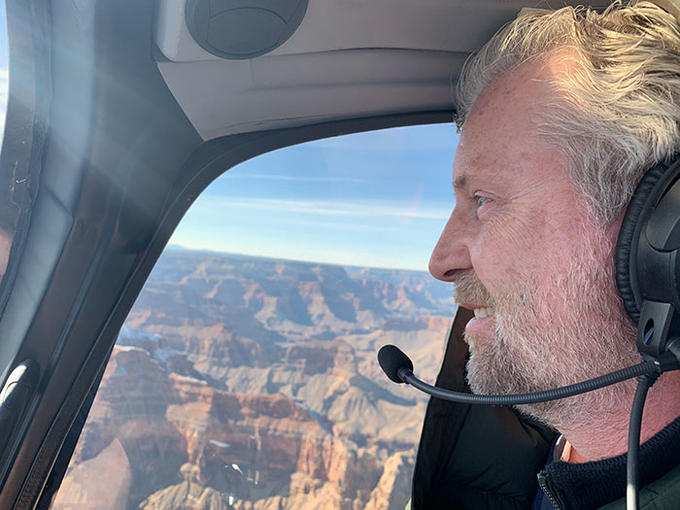 The Grand Canyon by helicopter

So it was more than appropriate that our first view was from the air, affording as it does a real appreciation of the vastness of the canyon. An optional extra on the tour, Joel dropped us off at the Papillon Heliport, before taking Utkarsh, one of five travellers on our mini bus that would comfortably seat 14, into the national park itself, as he’d chosen to hike to the floor of the canyon instead. We’d opted to add a 50-minute helicopter flight; there’s a shorter flight available but paying a little extra is a decision we did not regret.

Safely on board, we took off triumphantly to the strains of Wagner’s Ride of the Valkyeris, but as we breeched the edge of the plateau, the background music switched. Clearing the South Rim, the ground dropped away and the rousing Star Wars theme tune picked up just in time for what was, absolutely, an other-worldly experience. As the enormous canyon revealed itself beneath us thanks to the wrap around windows that almost went under our feet, in a split second I lost my breath and my whole body tingled, not just my spine. It was the warning sensation you get when you’re near any kind of edge, only magnified to another scale as we had, thanks to the skills of our pilot Dan, just catapulted ourselves over it. The feeling was intoxicating. Taking our cue from the next song, all that remained was for us to sit back, ride out the buzz and “Don’t Worry Be Happy”. We started to try to make sense of the terrain below, as one monolithic chimney stack and crooked pyramid after another rose up from the canyon floor and the sun caught the waters of the Colorado River far below.

Being the last days of winter, the canyon was dusted with snow and the white lines accentuated the geological layers of the descending walls. Dave, another fellow adventurer, was spot on when he declared: “it’s the icing on the cake”. Reluctantly back on the ground, we drove to the canyon’s edge, taking in one or two epic view points along the way. We briefly ventured down into the canyon, but the snow, so pretty from above, made for so slow going along the well-established trail so we returned to the rim in time to watch the setting sun cast shadows and golden light across the expanse.

That evening we stayed at the perfectly pleasant Red Feather Lodge in Tusayan, just outside the park. While tempted by the does-what-it-says-on-tin restaurant named “WE COOK PASTA AND PIZZA” that we passed on the way, we opted instead for some lighter snacks and spent a pleasant few hours getting to know like-minded Utkarsh, Dave and his wife Marie over a beverage or two before calling it a night ahead of an early start. 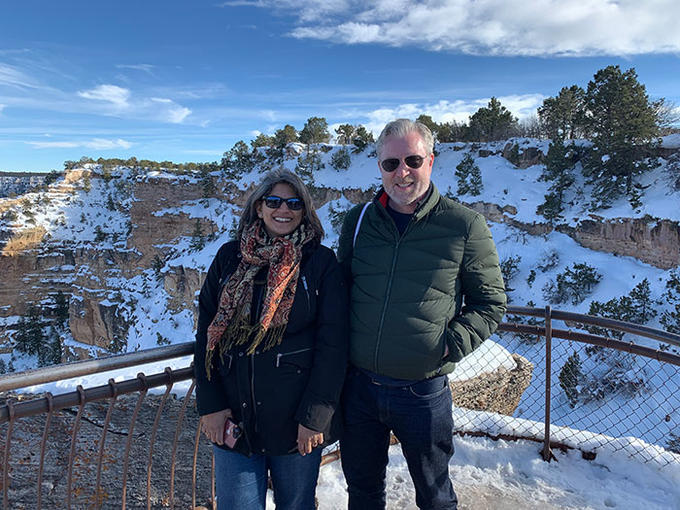 Driving back into the national park in the dark the next morning, the benefits of having a guide became clear. Joel not only knew exactly when to leave to maximise our sleep time, he also knew the park like the back of his hand, and wasted no time getting to Desert View on the East Rim in time for sunrise.

But it was as we watched the sky slowly turn navy, orange then pink, and the sun appear slowly over a distant ridge, that Joel came into his own, turning a magnificent view into a properly magical moment. We were all busy once again attempting the impossible task of trying to capture this incredible sight on camera, when Joel started to read a passage from an essay entitled “The Most Sublime Spectacle on Earth” by John Wesley Powell.

As the sun hit the wispy clouds and the canyon walls anew, Joel’s voice was clear in the still morning. “Here the colours of the sky are rivalled by the colours of the rocks,” Joel read. “The rainbow is not more replete with hues.” 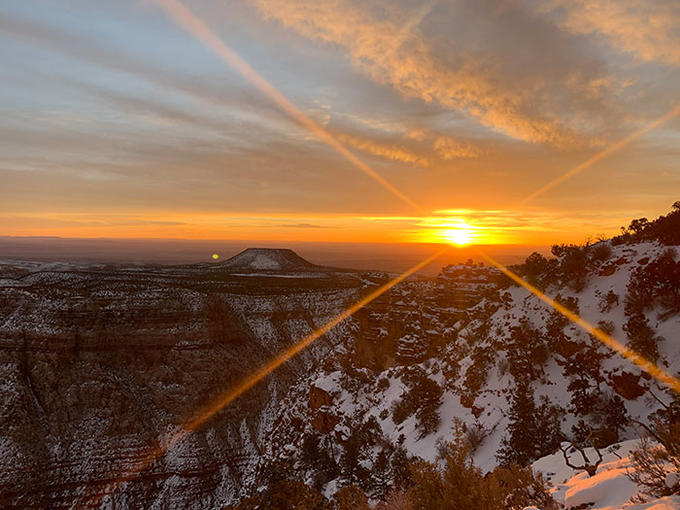 Moved by the poetry of the prose, we let our lens dip and we simply listened and gazed out across this truly awesome canyon. Unlike the day before, where the rim was bustling with activity and selfie-takers, there were just the five of us here with Joel. In turns out, it was the actual 100th Anniversary of the founding of the Grand Canyon as a National Park on 26th February. Without another soul in sight, we’re fairly certain we were among the very first people to celebrate this milestone.

Day two of our three-day Bindlestiff tour had barely begun, but we were already off to a cracking start. Over the following days we would see Antelope Canyon, Horseshoe Bend and Lake Powell. Next up was Monument Valley, and, as I’ll explain, I could hardly wait…

Phil explored the Southwest on the three-day Winter National Parks Tour operated by Bindlestiff Tours. In winter, the tour departs Las Vegas on Monday from November to March. A summer version of the tour departs on Mondays, Thursdays and Saturdays from April to October, with an additional camping option as well as lodging. Ask your Travel Consultant about adding one of these tours to any West Coast USA Journey, one of many adventures you can enjoy with Bindlestiff Tours across the US Southwest, Western Canada and Alaska.

Grand Canyon
The Grand Canyon: By Helicopter, Jeep and Starlight
I’ve seen a million or more pictures of the Grand Canyon. I thought I knew what to expect when we arrived in Arizona. I was wrong. All the images and all the videos in... Read More »
Grand Canyon
The Best Way to See the Grand Canyon in One Day
When planning a USA holiday, it can be hard to match everything you want to see with the time you have. While there are plenty of ways to get around this... Read More »
Call:
0208 127 4273 0333 333 2211
Talk to a Travel Expert
Instant call back »We'll call you back for free
X