Feature writers, journalists and content-types have a pretty cushty job – regardless of the subject matter. They get to experience things that most people don't have opportunity to. For example: once, when working for my local newspaper, I got to do a zombie apocalypse experience. Like I say, not exactly a run-of-the-mill activity.

And when it's travel you get to write about, take inspirational photos of and gather video footage for across the globe, your career just doesn't get much better. Phil Murray, our Flight Centre UK Editor-in-Chief, explains why... 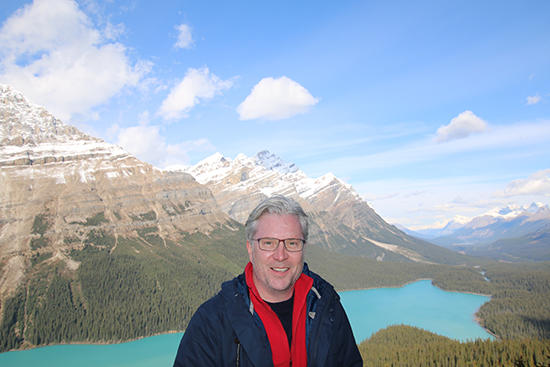 Right Phil, let’s kick things off with an easy question: do you prefer to travel by car, train, plane or on foot?

My dad worked for a well-known national airline when I was growing up, so I was lucky enough to fly quite a lot. It was always so exciting for me – the boiled sweets, the ear-popping take-offs, the tiny proportions the food came in. I haven’t really lost that. Flying for me is one of the most extraordinary things we get to do as human beings and I don’t understand when people are blasé about it.

How about city, beach, jungle or reef?

I’ve just come back from Istanbul, which really is the most world-class, cosmopolitan, east-meets-west city. I loved it. And I don’t think I’ll ever tire of visiting the likes of New York and Sydney. But, that said, I live in central London so I do feel the need to get away from the hustle and bustle as well. I’d probably go for jungle over beach and reef. I don’t really tan and I’m not a big fan of sand – it just gets everywhere. That said the best beach I’ve ever been to was Sardinia’s Is Arutas on the west coast. It’s made of tiny quartz pebbles the size of rice grains, so it brushes off and stays put even in the strongest breeze! The locals did actually point and laugh at me for being so pale, however.

So you’re still pretty new to the Flight Centre team – how long has it been now?

Just shy of 10 months. I can’t believe it’s nearly been a year already. It’s flown by, pardon the pun, so that’s a good sign right?

What did you do before Flight Centre?

I worked for a creative communications agency as a video producer. I was there for 13 years, but I worked with so many different clients, I like to think I didn’t become too institutionalised!

And what do you love most about your role?

What I really love is that this role encompasses so many things I enjoy. Most recently, I’ve been producing videos, but I trained and worked as a journalist in Washington and London. The breadth of my role means I’m writing and editing articles, brochure and advertising copy, as well as travelling to fabulous destinations to capture video content. It’s fast-paced and hard work, but I feel very fortunate.

How many countries have you visited in your lifetime?

I’m never sure if that’s the best way to measure how much you’ve seen of the world. I’ve been lucky enough to travel to quite a few US states. They're all very different, but that counts as just one country. And, then do you treat the UK and Ireland as two countries or five? Depending on your view, the total number would either be 42 or 45! So, plenty more to go for…

What are your top five places on the planet and why?

Yosemite National Park, USA. Inspiration Point truly is one of the most awe-inspiring and beautiful views I’ve ever witnessed. The way the sheer granite walls of Half Dome and El Capitan rise up from the valley floor makes it look like it’s been sculpted to perfection by some higher power.

Queenstown, New Zealand. It’s the adrenaline capital of the world. Still gutted the weather was against us, despite trying several times to do a sky dive. The sports stadium is also probably the most beautifully-appointed arena in the world, what with the Remarkables as a backdrop. During the game we watched, some locals arrived carrying their sofa above their heads, beer coolers in the other hand, and made themselves very comfortable right on the sideline.

Byron Bay, Australia. I fell instantly in love with the vibe of this beach-side haven and its “alternative people”, to quote one of the locals. Even adding kale to the smoothie I was served at breakfast couldn’t detract from the appeal. Add this to any New South Wales itinerary and be sure to allow time for a surf lesson.

Okavango Delta, Botswana. Watching a family of lions split up and surround their prey like they were playing a giant game of chess was pretty thrilling – although I was secretly glad the little impala escaped. And then, in a complete change of pace, we drifted along the delta in a traditional mokoro boat, navigating the “hippo highways” – trails left behind by the resident, wide-bottomed water beasts.

Easter Island, Chile. The most remote place I have ever been – it really is quite literally in the middle of nowhere. And while the giant-headed stone moai may not be quite as pre-historic as first appearances suggest, the way they were constructed, and how that led to the downfall of the population that worshipped them, really is fascinating. It’s also a bona fide Polynesian island, so expect some Pacific island hospitality on arrival!

Where haven’t you been yet that you really want to go to?

Vietnam and Cambodia. I’ve been wanting to go to Angkor Wat since I travelled around Thailand during university. Even then I was getting frustrated that everyone I talked to was going there next, and yet I still haven’t got round to it. The world’s a big place, I suppose.

The short answer is wet wipes.

Lastly, where are you jetting off to next?

I’m about to go to India for a filming trip. Fingers crossed we catch some tigers on film!

Want to kick-start your dream career with Flight Centre? Check out our careers page here. Or if Phil's tips have fired up your wanderlust, speak to one of our Travel Experts about planning your next trip.

Dream Travel Jobs: Suzy from Beach Escapes
Most people dream of travelling the world for a living. And we admit it: at Flight Centre we’re pretty lucky in that, if we’re not busy travelling for work, we’re... Read More »
The Best Jobs to Have in Travel
Love travel so much you wish it was your job? Well it can be. The travel industry is one of the most exciting industries to work in – and we should know! Whether... Read More »
Call:
0208 127 4273 0333 333 2211
Talk to a Travel Expert
Instant call back »We'll call you back for free
X