Travel blogger Paul Corbett, editor of My Postcard From, was a little apprehensive about getting in the water to see the Great Barrier Reef in Queensland, Australia. He soon found ways to discover this underwater paradise even for those that are less confident at sea.

Submerging beneath the shimmering blue water of the Pacific Ocean, I spy flashes of silver as a shoal of fish scoot by and then the multi-coloured reef comes into view. It may sound like the opening scene of Finding Nemo but there is nothing animated about snorkelling along the Great Barrier Reef. I've been lucky enough to take the trip out to the coral reef on two occasions, doing the same trip both times, yet finding each visit a very different experience. 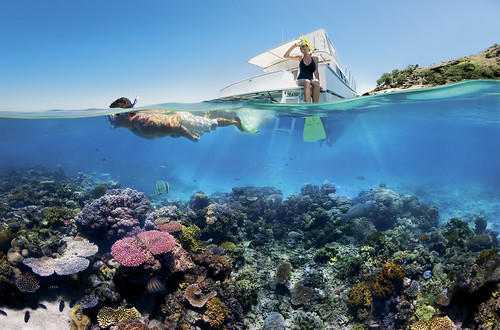 Getting my feet wet

Spending the day out on a pontoon in the middle of the Pacific Ocean there was plenty to keep me occupied. As a poor swimmer I was a little uncomfortable donning the striking purple wetsuit, goggles and snorkel but all those nerves disappeared as I left the comfort of the steel steps and plunged into the deep blue. There is a cordoned off area that never goes far from the pontoon so I stuck close to the edge in order to grab hold of the buoys when I surfaced. Not that I did that very often as once I slid my head underwater a whole new world appeared before my eyes. I couldn't tell you the species of fish that sped past my head on several occasions but there are a large variety and they come in all sizes. I'd gone equipped with an underwater camera which I happily clicked away with but spent most of the time looking all around me trying to see as much as possible. After around thirty minutes and tiring, I retired to the pontoon, grabbed some lunch and had a wander around.

A small area is dedicated to those wishing to be a little more adventurous and try scuba diving. Gearing up, the trainee divers get instructions on how to use their equipment whilst bobbing around in the ocean. I ventured down a nearby staircase to an underwater viewing platform that reminds me of those you get in modern aquariums such as the one on Darling Harbour in Sydney. Through the windows below sea level I happily gazed at the underwater life without getting wet.

I was distracted by several sets of human legs appearing to the left. Descending slowly their full body came into view and I realised these were the trainee scuba divers who I'd seen earlier.

Around the side of the pontoon regular submarine trips took visitors further out to get a better view of the reef. Sitting tightly against the window I got a closer look of this amazing natural reef.

A great day in the deep blue sea

A day out at the Great Barrier Reef is something you have to do if you find yourself that far north in Queensland. On both occasions I stayed in the town of Cairns that has plenty to see and do. Trips normally run from Port Douglas further north but transfers are usually included.

Before I left to head back to the mainland there was just enough time to get my feet wet again as I slipped back under the water in one final attempt at finding the illusive Nemo.

To discover the Great Barrier Reef for yourself, see our cheap flights to Australia - and keep an eye on our Holiday page for exciting holiday deals.