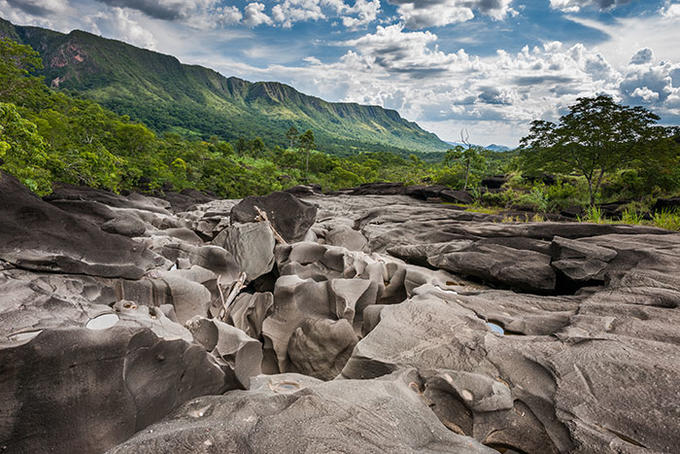 According to NASA, the most luminous point seen from earth’s orbit, due to the amount of quartz crystal, is Chapada Dos Veadeiros on the central Brazilian plateau. From the Visitor Centre of this World Heritage Site, protected as one of the oldest tropical ecosystems on Earth, there are a number of hiking trails where at times you’ll be crunching underfoot pink, white, fawn and clear quartz. The park allows entrance only between 8am and 12 noon with a limit on numbers for each trail, and you must be out by 6pm. Viewed from high points, the green-hued vegetation is dense along the Rio Preto which runs between apricot and grey cliffs forming canyons. Waterfalls, the highest at around 400 feet, are great places to cool off in the tropical heat - shallow pools amongst rocks and boulders with goldfish-sized black fish, deep blue pools with the bottom unseen, or rocks with water gently cascading over. Then there’s Val da Lua – an other-worldly rock formation resembling the moon’s crater landscape but with water coursing through it. Deep, narrow canyons, holes and crevices have been carved by thousands of years of water leaving smooth greyish-white rock dipping and cresting like whipped egg white. 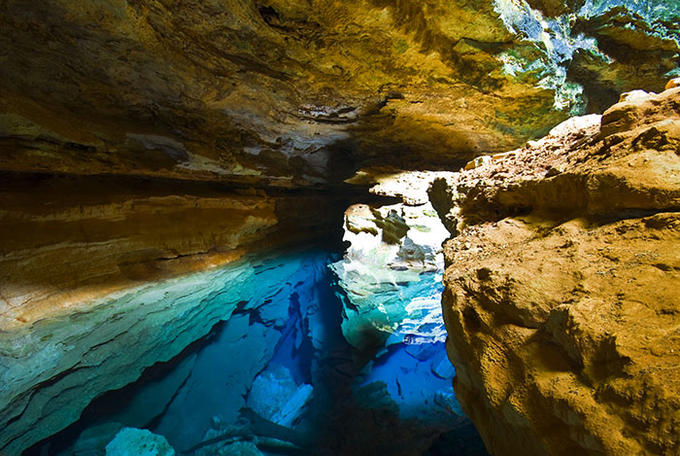 This park, consisting of 375,950 acres, resembles a green Grand Canyon from atop Morro de Pai Inacio, an 1120m rock just off Highway 242 not far from the old goldmining town of Lencois. This colourful town is a great base for touring into the Diamond Highlands, mined from the 1800s, when diamonds were found glinting in surface dirt, until mining was banned in 1995. Travel 93 miles to Poço Encantado on red dirt roads from Lencois, passing by fields of cactus, bony white cows and straggly trees. Ochre termite mounds – knee to thigh-high - rise regularly across fields, like a raised Twister game.

Poço Encantado is accessed by dusty dirt stairs leading down to a rock cliff. Entering a narrow crevice, claustrophobia may set in as you descend a wooden ladder then clamber over rocks led by a rope handrail below a low rock ceiling. A glimpse of indigo water doesn’t prepare you for what lies around the corner. A vast, black cave opens up. The eye is drawn to incredible shades of blue, still water lit by sunlight streaming through a fissure and encircled by blazing orange rock, fading to a muddy yellow and then blackness. It’s difficult to distinguish what’s reflection and what’s underwater. Magical.

A 40-minute drive on, along rutted dirt roads followed by a river crossing, brings travellers to Poço Azul. Showered and outfitted with life jackets and snorkels, visitors access this cave by a downhill walk. A breathtaking view of a pool in shades of turquoise, teal, indigo and topaz - surrounded by orange, mustard and fawn rock which gradually fades to white in deep places - is seen from the top of a steep, wooden, slippery stairway inside the rock entrance. Descend to another platform and lower yourself into the cool water, so clear that rock formations below look incredibly close but in places are 50 – 60 feet deep. Float below a rock roof splattered with coppery blue. Sunlight filters through a fissure and dances on water rippled by snorkelers giving the effect of light reflecting off a slow-moving disco ball. The cavern disappears into blackness, slightly menacing, a rope across warns against continuing. 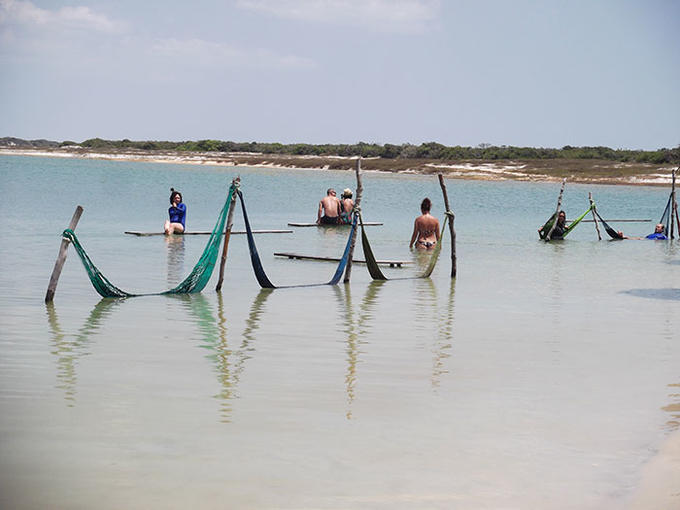 Catch a dune-buggy day trip through this park leaving from the laid-back beach town of Jericoacoara, itself only accessed via 4x4s across white and golden sand dunes, some cliff-like. Blast along beach to Pedra Furada, the sea a backdrop through the tilting rock arch, and onto Árvore du Preguiça – a tree with branches resembling long windswept hair.  But the highlight...the lagoons. Clear blue, Lagoa Azul surprises, appearing in sandy nowhere. Thatched umbrellas, seating, tables and a bar cluster on the small shore. Secured planks of wood sit on the freshwater surface and hammocks slung between wooden poles provide places to lounge in the warm water. The most picturesque spot at Lagoa Paraíso, too large to see the end of, is at Alchymist Beach Club which charges for entry. Hammocks and thatched umbrellas dot the surface of azure water which fades to aquamarine towards the white sand shore. Wooden planked walkways lead between thatched umbrellas, tables and chairs. Relax sipping on caipirinhas, or paddleboard, swim or sun-lounge under white umbrellas. Mid-afternoon dune-buggy back across never-ending sand broken by patches of scrubby bush and palm trees stands. 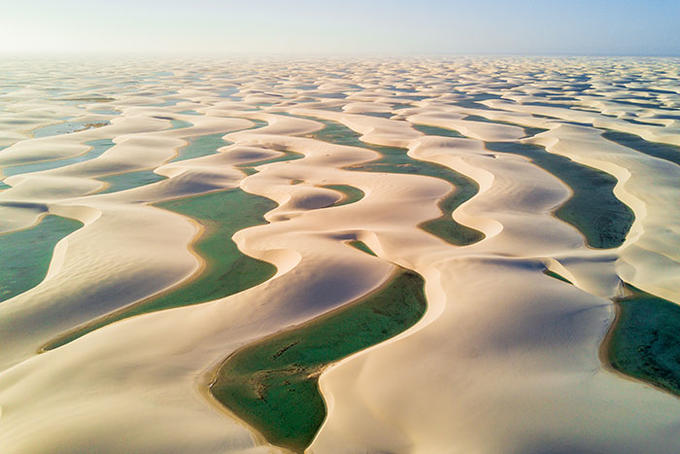 Described as looking like bed sheets (Lencois is Portuguese for sheets) this National Park’s white sand dunes stretch 27 miles along coastline and inland 31 miles. However, during May to October - preceded by north-east Brazil’s six-month rainy season – it’s dotted with freshwater lagoons. Located a 40 minute, 4WD bucking-bronco drive through scrub from Barreirinhas, the lagoons surprise. Ranging from turquoise to deep blue, to green to brown, they’re hidden until the hill-sized, white powdery sand dunes are crested.  Every year as wind moves sand – it encroaches on surrounding bush by five metres a year leaving skeletons of trees jutting from it - the named lagoons change shape. I swim in the warm waters of Laziness Lagoon, so named as it’s the first one reached by visitors. Many go no further. Lagoons of all sizes and shapes fill dips or weave their way through valleys of sand like rivers.

Guided treks lasting several days can be taken, skirting the dunes rather than climbing. Stop to swim and walk by starlight. Fly over Lencois Maranhenses. It’s only from above that you realise its immensity.  Looking down, multi-hued lagoons appear as dye blots on white paper. Spectacular.

Fancy a Brazil adventure of your own? Check out our flights to South America here

I'm a New Zealander who wrote children's fiction, then took up travel writing to justify my long overlanding travels through South and Central America. A relaxing holiday is not for me, I enjoy discovering, new adventures and a few challenges along the way.

Brazil
9 Brazilian Foods You Have to Try
South America boasts a fusion of flavours so unique that no other continent can quite compete. And within that is its crowning glory: a little country called Brazil –... Read More »
Call:
0800 587 0058 0333 333 2211
Talk to a Travel Expert
Instant call back »We'll call you back for free
X