The road to Bali is well travelled, but a Journey to Indonesia reveals there’s so much more to the region than blissful beaches and luxury hotels, says Tess Watkins.

My unforgettable adventure – trekking through paddy fields, marvelling at temples and watching the stars glitter overhead while cruising the turquoise Indian Ocean – began in Yogyakarta. The heart and soul of the island of Java, it’s a lively hub of cultural and culinary delights, of Indonesian traditions and artistic heritage. 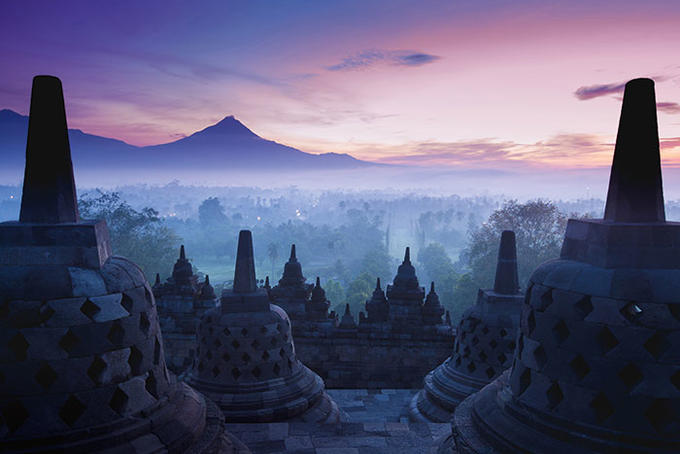 A mesmerising orange sunrise greeted us on our first morning, illuminating the domes of Borobudur Temple. Built in the ninth century, the site is the world’s biggest Buddhist monument. A vast creation – mysteriously abandoned in
the 14th century and rediscovered in 1815, buried under volcanic ash – it’s crafted from two million blocks of lava rock and home to 504 statues of Buddha, as well as more than 2,600 carved panels.

As we clambered up vertiginous steps to reach the temple top, our local guide explained how the intricately sculpted panels depict Buddhist doctrines and scenes of daily Buddhist life in ninth-century Java. He was passionate and
proud of what his ancestors had created, and as I soaked in panoramic views of the landscape below and a smouldering volcano in the distance, I had to agree the sweaty climb was worth it.

Bali, the ‘Island of the Gods’, was next on our agenda. Indonesia’s most popular destination, it’s just an hour’s flight from Yogyakarta and famed for its luxe resorts, irresistibly soft sands and warm hospitality. The stylish south-coast
town of Seminyak has these virtues in abundance, as well as a main street that’s lined with upmarket boutiques and fashion stores, trendy bars and restaurants. 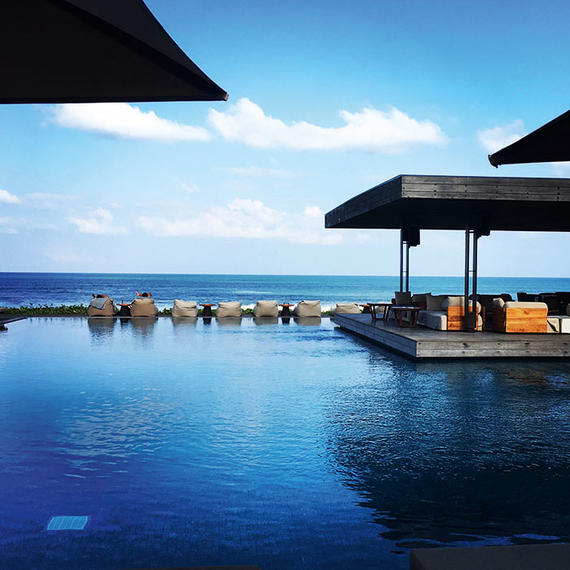 At our hotel – the oceanfront Alila Seminyak – we feasted on fresh fish and grilled prawns while watching the golden sun drop below the horizon, before firepits danced under the night sky. Enveloped in this spellbinding setting, I couldn’t remember when I’d last felt so relaxed.

Away from the beaches, Bali is a land of serene mountain valleys and spectacular rice paddies, where emerald-green terraces have been carved out by hand over 2,000 years. We paused on our Journey to the uplands, stopping at the Plataran Canggu Resort & Spa to put our culinary skills to the test. Patient chefs shared their secrets, teaching us how to cook local specialties, from a long bean salad and fish wrapped in banana leaves, to fragrant chicken satay and coconut crepes. Tucking into our creations was a delicious reward. 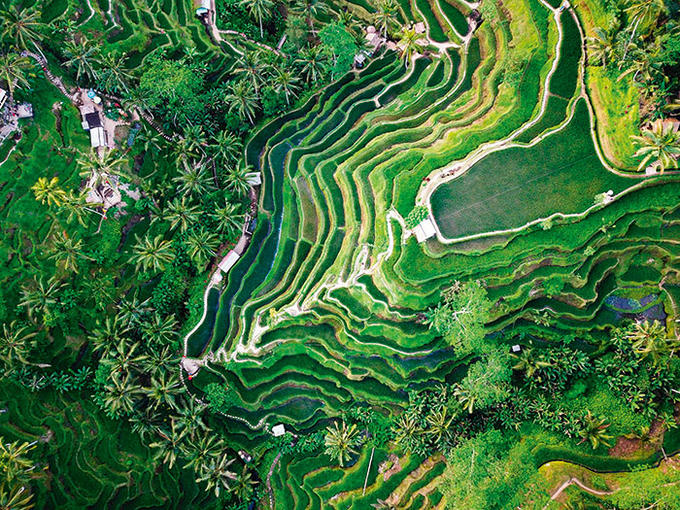 Up in the town of Ubud – Bali’s cultural heart and renowned for its traditional crafts – the cool mountain air washed over us, along with a feeling of utter tranquillity. Setting out on a sunrise trek, we passed into Tegallalang – home to one of the island’s most famous rice terraces – where people working in the fields smiled and waved as we drew near.

Each step took us upward, over small freshwater streams and through deep rainforest, before a clearing made me catch my breath. We were standing at the very top of the paddy fields, with lush green hills spread out below us as far as the eye could see. It was unlike anything I’d ever seen. I didn’t think I’d be able to top that view – until I saw the giant swing. At the very highest point of the rice fields, I swung out over a valley of palm trees, the Balinese jungle stretching out below me. 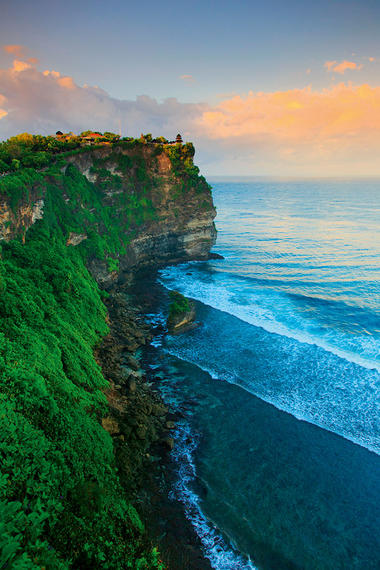 After such an adrenaline high, it was time to relax at Uluwatu, a 90-minute drive south of Ubud. Harbouring the most famous waves in Bali, this hilly coastal region has all the ingredients for leaving you feeling totally Zen, including some seriously luxurious resorts: my private pool at Alila Villas Uluwatu was bigger than my London flat!

Yet Indonesia still had so much more in store, and the natural splendour of the island of Flores beckoned. At the charming port town of Labuan Bajo, on its westernmost tip, the shimmering ocean spread out before us. In the distance, we spotted our home for the next two nights – a phinisi schooner with her sails billowing in the gentle breeze.

An alfresco lunch of freshly grilled fish and rice filled our bellies and fuelled our sense of adventure as we set sail for  Kalong Island. It was totally silent. “Just wait,” instructed our guide. Seconds later, a cloud of bats flew from a cave, clearly visible against the sunset. 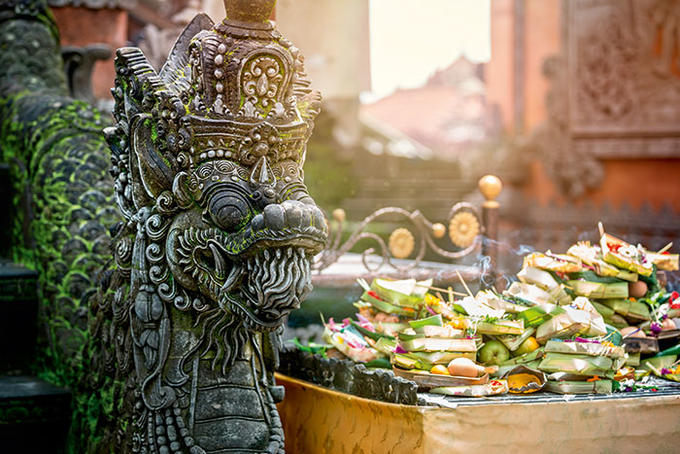 The next morning, we were up before sunrise for a trek up to the peaks of Padar Island. We reached the top just as the sun began to emerge from behind the undulating hills, bathing the scenery in burning orange hues – it was like something out of Jurassic Park.

But our otherworldly Journey was not complete. Seeking out the feared Komodo dragon was a thrill. The heaviest lizards on Earth can only be found in Komodo National Park and they will eat almost anything, including water buffalo – and humans. With that revelation ringing loudly in our ears, we hopped into a speedboat to Rinca Island. Within minutes of stepping off the boat, we saw our first dragon – a small one, basking in the sun. “Don’t be fooled by its size,” advised our guide. “The smallest are often the most aggressive.” 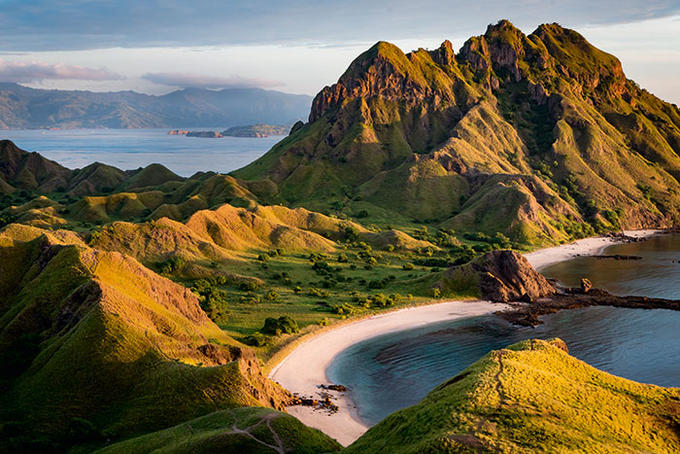 But there’s more to this national park than its mighty dragons. Pantai Merah – the pink beach – is a glorious vision of blushing sand that positively glows under the golden sun. Sitting on the near-deserted beach, I ran the pink sand through my fingers and listened: as the waves tumbled onto the shore, I noticed a gentle tinkling, which grew louder as the tide drew out. It was the noise made by hundreds of millions of tiny shells as the water passed over them.

As my time in Indonesia drew to a close, I could only reflect on all the incredible sights I had seen. Surely I hadn’t missed a thing? And yet, nothing could prepare me for the night skies of Komodo. As we sailed back towards Labuan Bajo, our guide suggested we look up. I could barely see him through the inky black, but it didn’t matter – what shone above was mesmerising. The entire Milky Way filled the sky, shining brightly.

I lay back and watched the twinkling light show in the heavens. As I smiled into the darkness I made a promise to myself: I’d be back to sink my toes into those pink sands again some day…

To find out more about booking your Escape to Bali, speak to one of our Travel Experts over the phone, online or in-store.

Bali
Bali’s Best Wildlife and Where to Find it
With its stunning beaches and a regular turnover of sun-seeking and surf-chasing travellers, Bali is often best known as Indonesia’s go-to island for partying and... Read More »
Bali
10 Best Beaches in Bali
This post originally appeared on Flight Centre Australia's blog Bali's world-famous beaches lure thousands of visitors to the country’s fabulously sun-kissed shores... Read More »
Call:
0800 587 0058 0333 333 2211
Talk to a Travel Expert
Instant call back »We'll call you back for free
X