7 Stunning Places You Had No Idea Were In Queensland

When you think of Queensland it’s easy to think of only the bright lights and skyscrapers of Surfer’s Paradise on the Gold Coast, but I’m here to tell you that Queensland is actually home to a laundry list of locals-only spots that will take your breath away. That’s right folks, Queensland is home to much, much more than just the (seriously gorgeous) Great Barrier Reef. Trust me, I’m a Queenslander.

Ready to dive in? Here are seven ridiculously stunning places you had no idea were in Queensland. 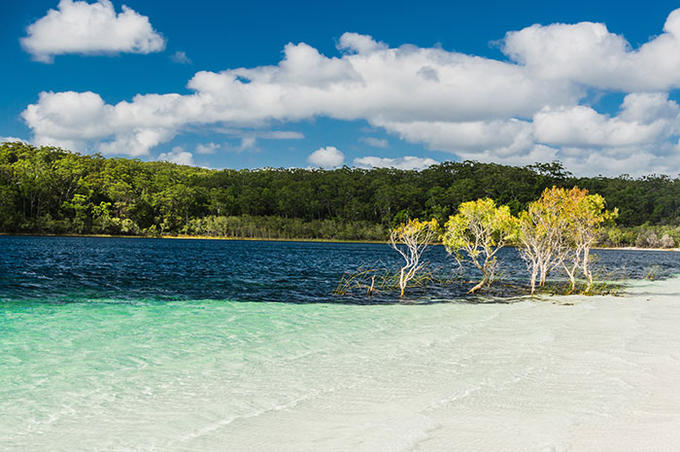 Hands up if you’re familiar with the iconic Whitehaven Beach? It’s probably one of the most recognisable spots in Queensland, but did you know there’s a spot with equally as white sand and even clearer, fresh water a stone’s throw from Brisbane? Oh, and this spot was even a stop on Harry and Meghan’s royal visit to Australia in 2018?

Allow us to introduce you to Fraser Island’s Lake Mckenzie. Unlike Whitehaven, Lake Mckenzie is a perched lake, which means its made up of 100% rainwater. No streams, ground water or anything feeds into lake; it’s just rainwater - which is pretty darn cool. The white sand is made up of silica that acts as a filter for the lake, making the water super clear and photogenically blue. Plus, being a perched lake means there’s no choppy surf or sea creatures to worry about while you take a dip!

Set higher swimming goals this year: instead of going down to the beach, hike up a gigantic #waterfall for a dip 🙌🏻 #WindinFalls in @queensland's @athertontablelands is a good place to start, like @_sarahlatham did here. It takes around 90 minutes of hiking through the #OldCairnsTrack to reach this unreal spot in #WooroonooranNationalPark, so you’ll definitely want to jump in for a refreshing dip once you get there. Pack a picnic and enjoy breathtaking views while sitting on top of the falls, looking out over the World Heritage-listed @tropicalnorthqueensland #rainforest. #seeaustralia #thisisqueensland #athertontablelands #thegreatoutdoors #naturephotography #travel

Ever wanted to take a dip in your own private infinity pool at the top of a waterfall? Or didn’t know you wanted to until right this second? Same. You’ll find the breathtaking Windin Falls in Wooroonooran National Park just outside of Cairns.

The infinity pool is tucked away at the end of an hour and a half hike, but trust us - having this natural infinity pool all to yourself is beyond worth the hike.

Your Instagram is about to go next level, and your work mates will be buzzing to ask you about that waterfall you swam in while in Australia. You’re welcome! 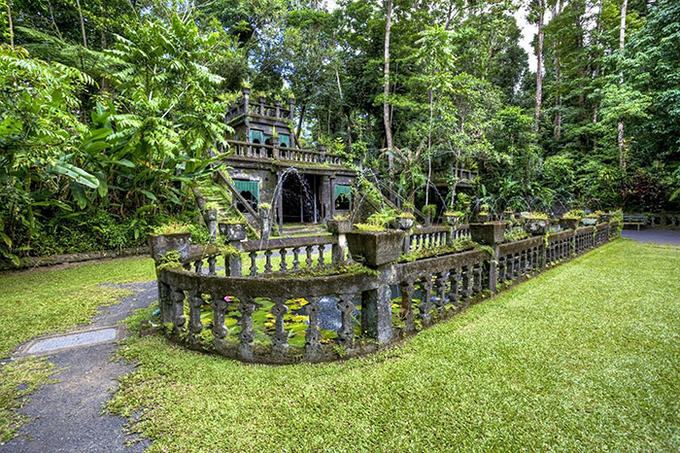 Picture this: an ancient, fairy tale castle nestled away in the rainforest, enveloped in moss and surrounded by cascading waterfalls. Now, you’re probably not thinking of Queensland are you? It’s okay—I’m not sure many people would be! But, allow me to introduce you to Paronella Park.

Spanyard José Paronella bought the land and built the fairytale-like castle to impress his wife, and while their relationship didn’t last, their love story lives on in the beautiful grounds of Paronella Park. Trust me, this is one you’ll need to see to believe - just make sure you’ve got enough storage on your phone for the pictures you’ll be taking! 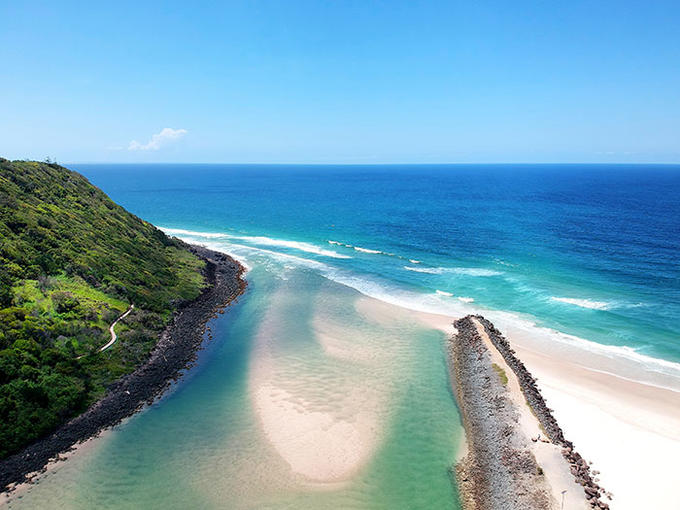 Tallebudgera Creek isn’t your regular creek, folks. It’s pure dreamy, azure Insta vibes. Nestled behind Burleigh Headlands on the Gold Coast, this is a local secret that is better than some of the coast’s best beaches. Just don’t tell anyone you heard it from me!

Plus, because it’s a creek and not the ocean you’ll have a sheltered swimming spot with plenty of shade from the Australian sun. My tip is to do the Burleigh Head National Park walk (starting at Burleigh Main Beach) to find hidden coves where you can laze by the calm waters all day long, without bumping into another soul. Bliss. 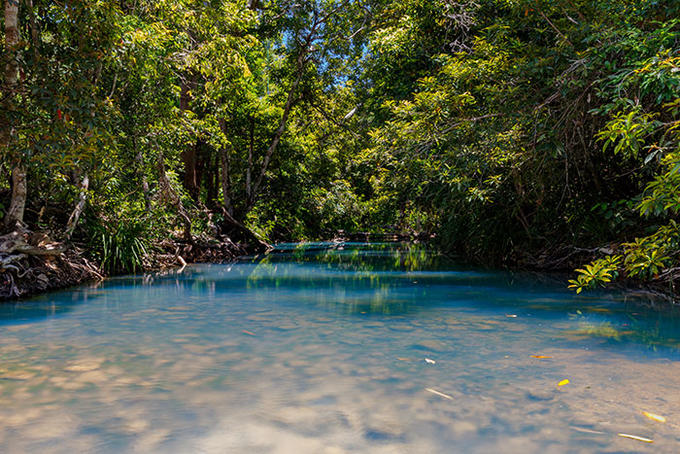 Yes, natural spa pools are a very real thing in Queensland. The Cardwell Spa Pools are somewhat of a social media celebrity, but rest assured, when you visit you’ll most likely be the only ones there. The waters of the spas are a striking, intense blue that seems like it can’t possibly be real.

You’ll find this hidden gem just over a 2-hour drive outside Cairns, so its the perfect day trip to do while you’re in town checking out the reef. It’s worth noting as well that the pools are naturally fed, so the water levels do fluctuate depending on rain, so it’s always worth checking before you visit. 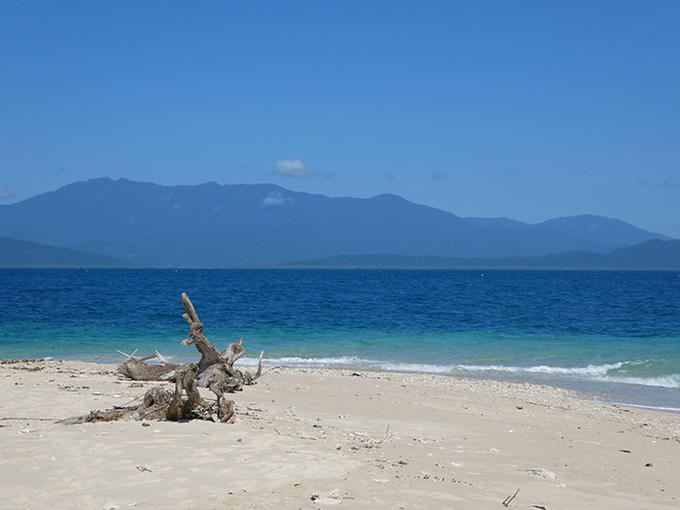 If you’re in Queensland to find Nemo, the Frankland Islands (a cluster of islands right on the Great Barrier Reef) are your best bet. The Frankland Islands still remain unknown to most, and are open to only 100 people at a time so you can guarantee your visit will be crowd-free and one of the most special things you do while in Aus.

This remains one of the most untouched spots to view the reef. My tip is to camp out on the beach and spend your days snorkelling the reef right on your (sandy!) doorstep. Plus, Nemo and friends call this spot home, so you’re pretty much bound to spot him chilling in his anemone home.

"Pumpkin Island...where doing nothing is considered an activity..." #surroundmewithwater

Pumpkin Island is another relatively undiscovered island that sits on the shores of the Great Barrier Reef. The island spans just six hectares and is available to be booked out entirely by your group. Yep, you and 33 of your closest friends can book out this eco retreat all for yourself. If you don’t have that many mates, no dramas - you can still stay on the island and bask in the fact you know you won’t bump into another soul.

You can catch glimpses of dolphins, sea turtles and even whales when they’re in season...all from your own private island. You’ll find this gem just 14km off the coast of Yeppoon on the Southern Great Barrier Reef.

Suddenly feeling the urge to discover Queensland's best kept secrets? Check out our range of Australia Holidays or chat to your Flight Centre Travel Expert to book your own tailor-made Queensland itinerary.

An Aussie with an insatiable thirst for travel, I attempt to soothe my ever-burgeoning wanderlust by peddling my recommendations for the very best things to do in my favourite places on earth. Often found scouting out the best street food, chasing waterfalls or lazing around a secret swimming spot I’m at my happiest when in a place I’ve never been before with nothing but a day of exploring ahead of me.

Australia
Top Tips for Booking your Queensland Holiday with Flight Centre
Planning your trip to the land Down Under? Flight Centre can help you plan the best Queensland holiday, as Brighton Travel Expert Mel Donoghue explains. Fresh... Read More »
Call:
0800 587 0058 0333 333 2211
Talk to a Travel Expert
Instant call back »We'll call you back for free
X