5 Reasons Why You Should Stopover in Singapore

Small but perfectly formed, Singapore is the ultimate melting pot, blending cuisines, architecture and art in astonishing style. Stay for a day or longer. You won’t regret it, says Lee Cobaj... It's easy to get there (and get around)

With multi-award-winning national carrier Singapore Airlines operating direct flights four times a day from Heathrow Airport, as well as a new direct route flying five times a week from Manchester, you’re all set for a stopover to remember. Once you arrive in the ‘Little Red Dot’, it’s a breeze to get around, thanks to the city-state’s diminutive size at just 277 square miles and its efficient transport system. Save time – and money – by picking up a Singapore Tourist Pass and rack up unlimited rides on the bus and MRT/LRT trains.

Start where it all began, on the banks of the Singapore River, where in 1819 Sir Stamford Raffles set Singapore on course to become one of the world’s great trading nations. The area brims with old architecture, from the neoclassical Victoria Theatre to the neo-Palladian Arts House, the fountains and cupolas of Fort Canning Park and the Raffles Hotel Singapore. Get an overview from rooftop bar Smoke & Mirrors, atop the National Gallery Singapore, as well as an eyeful of the green expanse of The Padang, the Central Business District and the Marina Bay Sands hotel. 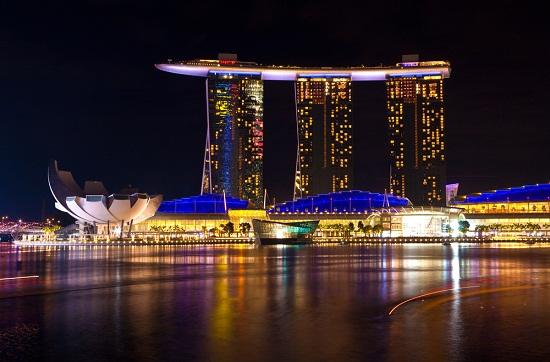 What has always made this ‘Lion City’ roar is its rich and colourful immigrant history, so don’t miss a trip to one of its vibrant ethnic enclaves. Head to lantern-lined Chinatown for market stalls, goldsmiths and pungent medicine halls, stopping for juicy barbecued meats along the way. Or aim for the candy-coloured shophouses, sari sellers and curry restaurants of Little India. Look out, too, for the dramatic towers and dioramas of Sri Veeramakaliamman Hindu temple.

You can tantalise your taste buds

Mashing up Indian banana-leaf curries with cheap Chinatown dumplings, traditional Peranakan dishes and modern haute cuisine, Singapore’s reputation as a sizzling foodie destination was cemented last year when Michelin arrived in the city and promptly handed out stars to 29 eateries. Splash the cash on langoustines and chateaubriand at Joël Robuchon Restaurant on Sentosa Island, with three stars, or try the world’s cheapest Michelin-star meal at Hong Kong Soya Sauce Chicken Rice & Noodle, where a bowl of the hawker stall’s sought-after chicken rice comes in at just a couple of pounds. Singapore has also emerged as the bar capital of Asia; hard to find and even harder to leave are the clandestine 28 Hongkong Street, the Deco-fabulous Manhattan at the Regent Singapore hotel and classy basement hangout Operation Dagger – all taking top 10 spots in the list of Asia’s 50 Best Bars in 2016, with 28 Hongkong Street at number one.

This city boasts top shopping. Go full throttle along Orchard Road for the mega-malls and designer stores that line this former spice plantation way. Or go bargain hunting at Bugis, an indoor–outdoor market where you’ll find funky nail bars, cheap-as-chips fashion buys and souvenirs galore. Haji Lane in the oud-scented Arab Quarter is the place to stock up on all your hipster accoutrements – try Mujosh for retro-sexy eyewear and Dulcetfig for vintage clutch bags.

Singapore
Singapore Sling: A Stopover Guide to Singapore
Vibrant street life, stunning green spaces, spectacular architecture. And don’t even get us started on the food... With surprises at every turn, a stopover in... Read More »
Singapore
5 Things I Ate in Singapore
Singapore’s food is a fusion of ancient recipes, traditional flavours and modern styles. The multi-cultural, diverse population also brings a unique combination of... Read More »
Call:
0208 127 4273 0333 333 2211
Talk to a Travel Expert
Instant call back »We'll call you back for free
X