5 Reasons to Go Wild in Langkawi

Many people (myself included) head to Langkawi simply to relax on a beach or unwind at one of the Malaysian island’s spa resorts. But after a couple of days of cocktails and taking it easy, I was keen to get away from the resort scene and see Langkawi’s wilder side. And I found it with a day trip to Kilim Karst Geoforest Park.

The coastal park is located on the north-east of Langkawi, covering an area of around 38 square miles. It’s a densely forested, mountainous region with a smattering of islands. As I discovered, the easiest way to view Kilim Karst’s flora and fauna is by boat while travelling along the delta of waterways formed by the Kilim and Kisap rivers as they flow towards the Andaman Sea. 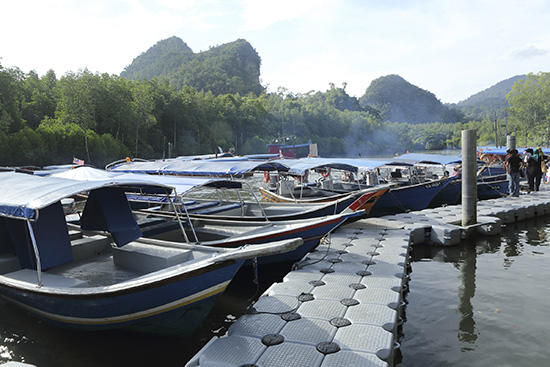 Bouncing along the floating jetty near Kisap village, I boarded one of the long, narrow boats that carry groups through the mangroves to points of interest within the park. I was soon impressed by the knowledge of wildlife and passion for Malaysia shown by Keiran, my guide, who spoke excellent English. 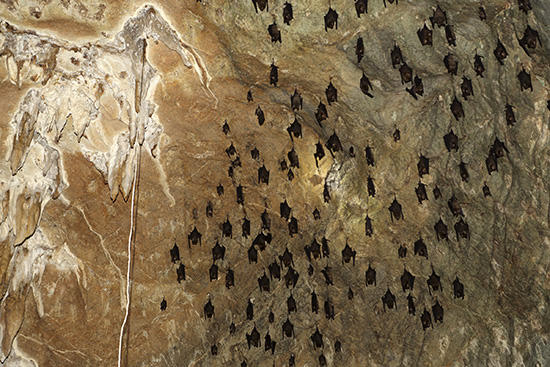 The plunging hills of the region’s karstic landscape are softened by trees; a canopy under which much can be discovered. After a short boat journey we disembarked on a jetty and followed an elevated wooden walkway leading over the sludgy mud that’s exposed at low-tide. We’d landed to take a look inside one of the many caves beneath Kilim Karst Geoforest Park, within limestone formed over 550 million years ago.

Colonies of tiny, fruit-eating Asian roundleaf bats had joined forces with insect-munching horseshoe bats, all hanging out together on the walls and ceiling of the vast cave we entered. They numbered in their thousands. Keiran shone his torch on the bats, who responded by drawing their wings tighter around themselves, in an effort to snooze away the intrusion. The bats play a role in pollinating pungent durian fruit, a rather pungent local delicacy, and help regulate the insect population.

The natural cavern also houses stalactites and stalagmites, which grow at the laborious rate of just one millimetre a year. In places they have merged into pillar-like columns, suggesting a process of growth that began around the same time our earliest ancestors walked the planet. 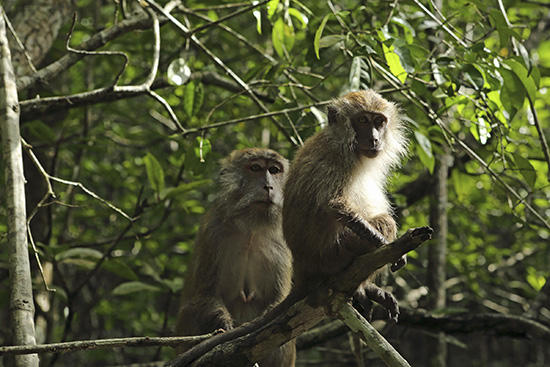 Getting close to monkeys

The bonnet macaques who live among the mangroves are clearly accustomed to the presence of humans. Some even appeared to pose for the cameras of tourists on the boardwalk. As in human circles, it’s the babies who grabbed people’s attention. Their cuteness drew moans of appreciation as they hugged branches with earnest looks upon their faces. I watched as an adult female carefully searched the back of her baby for ticks and other hidden insects. I turned to discover that I too was being observed. A couple of males sat on a nearby branch casting imperious glances in my direction. The primates in the trees seemed to be just as entertained by the close encounter as those standing with cameras in their hands on the boardwalk. 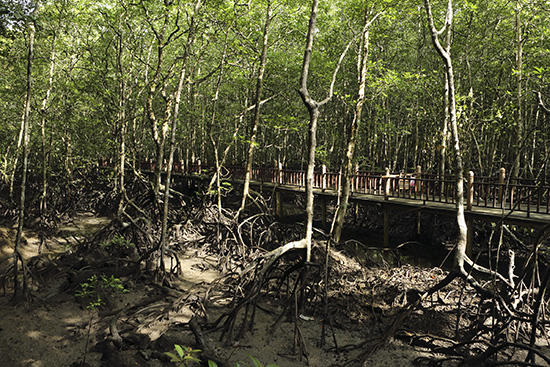 Below us a couple of the bonnet macaques sat looking into the water, on the lookout for food by the exposed mangrove roots. Like humans, they are omnivores. They searched intensely and dipped their hands into the water but, unfortunately for them, caught nothing while I was watching. 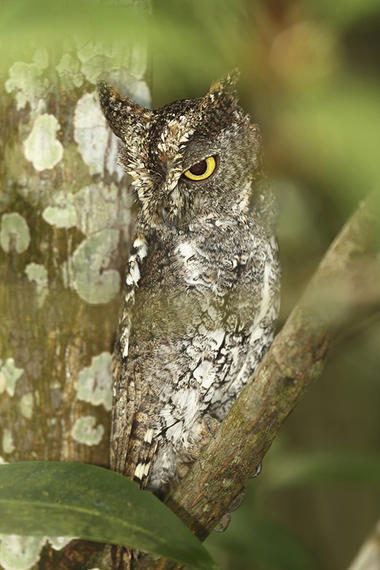 If you enjoy opportunities to spot birds on your travels you’ll love the proximity provided by the boat as it weaves along the waterways. Peering upwards into mangrove branches, Keiran pointed out a pair of oriental pied hornbills. He informed us that the males have red eyes and females blue, but I was unable to draw my attention away from their enormous beaks.

We pulled in alongside a mangrove, with Kieran excitedly whispering that we were just a couple of metres from an oriental scops owl, one of the smallest owl species in the world. Until the tiny bird winked, its natural camouflage meant I struggled to spot it amid the shadows and foliage. 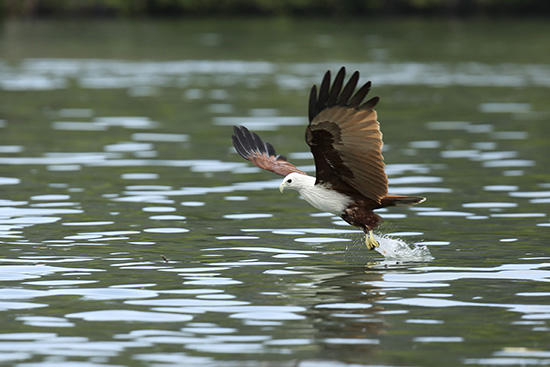 Most impressive though, was seeing white-bellied fish eagles and brahminy kites (a species known as the red-backed sea eagle in some parts of the world) swooping down onto the water to grab fish in their talons. Thankfully, despite the boat rocking, I was able to photograph one of the kites in action.

Swimming in the lagoons

Many tours of Kilim Karst Geoforest Park pause at Tanjung Rhu, allowing people to spend an hour on the beach and swimming in the sea. Instead, we weighed anchor in a quiet cove formed by a golden sandbank linking an islet to Langkawi. 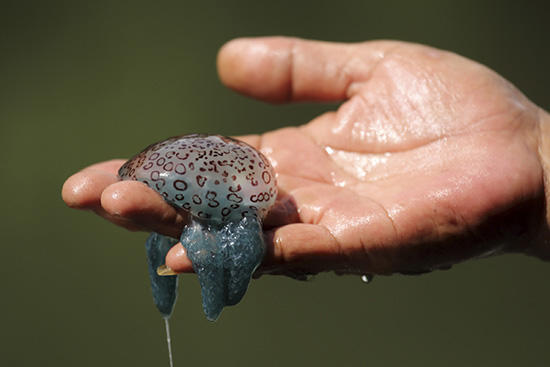 As I jumped into the pleasantly warm shallows, Keiran flashed a smile and warned me that the waters off Langkawi shouldn’t be used for skinny dipping, especially on an evening. This is because jellyfish inhabit the waters and their tentacles can cause irritating stings. As night draws in the jellyfish head towards shallow water to lay their eggs. Fortunately I had no intention of whipping off my trunks, and instead enjoyed a stint of swimming without upsetting anyone’s sensibilities or suffering a single sting.

Safe in the knowledge he was handling a harmless species, Keiran dipped his hand into the water and pulled out a jellyfish with a patterned blue surface. “The local name for these is obor-obor,” he informed us. 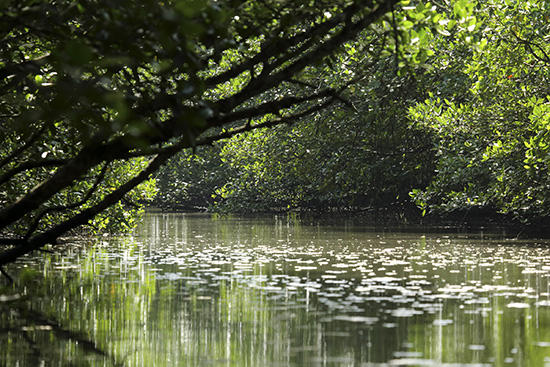 Boating between the mangroves

Sailing along the waterways provided opportunities to gain an understanding of the complex eco-system within Kilim Karst Geoforest Park. Birdsong, monkey calls and the alarm-like song of cicadas carry over the water; the sounds of a forest packed with life. The mangroves themselves appear an untidy jumble of overlapping roots. The interlinked branches of the mangroves provide habitat for 70% of the region’s snakes, while pythons lurk for prey in the water below. We also saw a couple of half-submerged monitor lizards and a couple of dolphins breaching.

Keiran informed us that during high tide the roots become covered with water. In fact, five of the 104 islands in the Langkawi archipelago become submerged at high-tide. Our boat pottered along at a gentle pace throughout most of our tour. But as we headed back from the coast we experienced the power of the engine. The driver let rip on the way to the Hole in the Wall restaurant and fish farm, our lunch venue. As we skimmed the water’s surface I had to hang on to my cap.

All told, it proved an enjoyable trip. Thanks to Keiran’s informative commentary and ability to answer questions with ease, I left Kilim Karst Geoforest Park with a much improved understanding of the region and its incredible wildlife.

Enjoy a luxurious holiday to Langkawi with our Southeast Asia Escapes

I’m a travel writer and professional photographer based in the north-east of England. I love exploring the world to experience the soul of destinations and capture snapshots representing the places I visit. Have a travel recommendation for me? Tweet me @stuartforster.

Malaysia
Spotting Unmissable Wildlife in Malaysia
Malaysia evokes images of postcard-perfection. Think on it for a moment and no doubt your mind will conjure up pictures of breathtaking natural beauty, endless... Read More »
Asia
Phuket's Magnificent Underwater World
This post originally appeared on Flight Centre Australia's blogJust few hundred metres offshore, there are some magnificent underwater worlds to explore in Phuket. It... Read More »
Call:
0208 127 4273 0333 333 2211
Talk to a Travel Expert
Instant call back »We'll call you back for free
X